Ditherington Flax Mill Content from the guide to life, the universe and everything 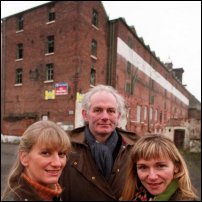 When we consider the historical importance of buildings, we tend to judge them in terms of their political significance. Castles and temples symbolise the dominion of their builders. Their modern equivalents in civic and corporate architecture represent the power of the organisations within.

More rarely, buildings are historically important for a different though more fundamental reason. In these cases, an attribute of the structure itself shapes our society.

This Entry concerns a disused factory on the outskirts of Shrewsbury in the UK; it goes by the quaint name of the Ditherington Flax Mill. Back in 1797, when it was built, its designers and owners-to-be had no intention to build a significant building. They were ordinary businessmen planning to take advantage of the enormous demand for linen created by the Napoleonic war. But that's what they did, and what they built raised the architectural bar. Literally.

William Strutt, Charles Bage, John Marshall and Thomas and Benjamin Benyon all went to the grave with no conception of the skyscraper. In the Midlands of the 1790s, there was no requirement for tall and slender buildings with productive floor areas hundreds of times the area of the foundation. Land was cheap and plentiful, and the structure erected over it represented nearly all of the capital invested. What the owners-to-be of the flax mill had wanted from their innovatively metal-framed building was fire resistance. Flax processing was highly inflammable; Marshall and the Benyons had just lost the uninsurable half of a £10,000 investment in a Leeds-based mill to fire.

Shropshire at this time was at the epicentre of a new iron-forging technology. Abraham Darby III had forged and built the world's first cast-iron arched bridge over the Severn Gorge just fifteen years before and new uses for iron were being explored with gusto1. Strutt had already tried iron columns in place of timber to fire-proof cotton mills. His demonstration mill burned down; the walls collapsed, taking most of the ironwork with them, leaving only a few surviving skeletal uprights. Charles Bage had an interest in iron construction and connections with Strutt and Thomas Telford, the Shropshire County Surveyor at the time. Appointed to design Ditherington, he went a step past Strutt's iron columns. He designed a complete iron frame to support the brickwork. Today his Flax Mill is generally held to be the world's oldest surviving metal-framed building. The known documentary evidence suggests that it was moreover the first building ever to employ iron for the cross-beams as well as the columns. If we accept this, then the men responsible for its design unwittingly changed the world. They made modern cities possible, and with them a lucrative trade in real estate. Though they never built higher than a few storeys themselves, they laid the foundations for the tallest buildings the earth will ever see.

John Marshall was a pioneer of the factory-based linen industry. Son of a linen draper, he inherited his father's business and developed it into a flax spinning firm, of which Ditherington was a part, reputed to be the largest in Europe for nearly 100 years. The brothers Benyon of Shrewsbury were traders in Welsh Flannel. They became partners with Marshall and between them they put £18,000 into the venture and bought seven acres of pasture in Childs Fields, bordering on the newly completed Shrewsbury canal. Charles Bage was taken on as a further partner.

Derbyshire-born, Bage became a Shrewsbury man in his 20s. He was a man of varied talent. In the 1790s he combined his interest in iron with a trade in wine, local politics and a bit of surveying. His wide-ranging interests may have been inherited; his father Robert was also a man of a range of talents - having established a paper-mill and, though unsuccessfully, been a partner in an iron works, finally becoming a successful author. He was also a close friend of Charles Darwin's grandfather. Charles Bage in turn became a close friend of Darwin's father and was clearly a part of a network of original and inventive thinkers with an entrepreneurial spirit. He corresponded with Telford and Strutt on matters related to iron and engineered his own solution to the problem of socketing joints of sufficient strength between iron cross members and columns - the problem that had stopped Strutt from attempting the complete iron frame. Bage's design for Ditherington had a cast iron shoe that fits on the column tops and into which the beam rests, keyed in by brickwork. He would later design other variants of socketting joints.

Strutt, also Derbyshire-born, was acknowledged by Bage as an expert on fire-proofing buildings. They corresponded in detail, sharing experiments on strengths of fixings, how materials responded under heat, how they affected other materials and elements of the structure. Their letters spanned decades and went beyond matters of iron-work to become a friendship. Bage at one point passing on a stream of questions from his cook regarding a proposed new oven, finishing with an exasperated 'Without your assistance I never shall be able to manage this sceptical cook'. The two men fed off one another: Bage picking up on Strutt's first efforts at fire-proofing cotton mills, Strutt employing Bage's solutions in later designs of his own. Son of a cotton-miller, Strutt was an accomplished and effective architect.

Bage's mill rose quickly by the side of the canal. The iron columns and crossbeams were cast at William Hazeldine's2 newly opened foundry in Longden Coleham near the English Bridge on the other side of town. Bricks were made on site with locally excavated clay. The main building was finished by September 1797, complete with the pair of steam engines needed to operate the machinery.

Even in its disused, dilapidated state in the early 2000s, the mill is an imposing place. Then, newly built using experimental building techniques, it must have been even more so. The highest part of the building extends through four storeys, excluding the attics. Inside each 180 x 36 foot floor, open from end to end, run lines of slim iron columns supporting crossbeams from which rise shallow arches to hold up the floor above. The floors were lit by rows of large windows – not the smaller, sparser windows left today which belong to the mill's later incarnation as a maltings. The doors and window frames were all of iron. The mill was finished off in style, with a decorative iron-work cupola mounted on a small tower at the northern end. In addition to the main mill there were a number of storage houses for the raw flax imported from as far as the Baltic, and for the finished material. There was a blacksmith's and stables, a dye-house and apprentice houses3 for the young pauper, often orphaned, labour.

In scale the flax mill was on a par with castles, cathedrals and ruling classes' mansions of previous ages. The intent that led to its dominating size and its design was significantly different – the straightforward creation of a product for trade and, it's not too much of a stretch to consider, an element of concern for the welfare of those working within it. Charles Bage's father Robert was a practising Quaker; much of his writing was on the theme of human rights for both men and women and he was known to care for the welfare of his mill-workers. It may be that Charles inherited an attitude of social responsibility along with his questioning mind. He certainly involved himself in Shrewsbury politics, taking charge of the workhouse for a time, and becoming the mayor. Strutt, Marshall and the Benyons were all Unitarians with an interest in improving working conditions and were praised in their day for the attention given to the health and morals of their young labourers. Marshall in particular restricted the common use of corporal punishment on his workers and encouraged the children to get some schooling. These may have been small gestures considering the awful working condition in mills, but they were gestures in the right direction. The fire-proofing protected life as well as investment.

The Ditherington Flax Mill has been referred to as an expression of Enlightenment Thinking4 and even in the 'most flourishing town in England', as Daniel Defoe5 referred to Shrewsbury in the 18th Century, it must have had considerable impact. It employed 1,000 people. The original insurance valuation of the premises6 was £64,000, a very large sum for its day. It ran as a flax mill for nearly 100 years until in 1886 the partners' grandsons abandoned milling to follow more rural lifestyles in the Lake District. It was then sold for a mere £3,000, but began a second life as a maltings. This business gave the building another 100 years as an important, productive part of Shrewsbury's economy, interrupted only briefly by its use as a barracks during World War II. Malting ceased in 1987 and over the next ten years the building, despite the provenance of the structure being well recognised, was quite shamefully allowed to become almost derelict. In the early 2000s preservation, though still not useful restoration, has been funded and the dereliction at least brought to a halt.

As for the mill's designer himself, he allowed Marshall to buy him out in 1804 and by the time of his death in 1822, he had seemingly lost interest in his great invention. Marshall noted him as a man of understanding and talent but not of perseverance. Though Ditherington Flax Mill itself never suffered a serious fire, other factories built on similar lines still continued to succumb. Bage and Strutt had assumed that if they could fashion a fireproof frame, the masonry would survive too. When experience showed that it didn't, these pioneers may have dismissed their own ideas as flawed. However as Shropshire's iron making had matured, this cradle of the Industrial Revolution had provided fertile ground for novel ventures in civil engineering. While Bage's mill imposed its distinctive shape on the Shrewsbury skyline for the next 200 years, Bage's ideas were being adopted, refined and developed. When rolled beams and joists as well as high-tensile rivets and bolts eventually made steel frames a feasible construction method for very large buildings, the modern skyscraper had arrived. The major exploitation of the method took place on the other side of the Atlantic, gaining its main impetus in Chicago in the 1870s, but the industry we know today, it can be argued, was born in Shropshire. The Darby dynasty of iron makers at Coalbrookdale were surely its progenitors, but the revolutionary engineering material that they produced enabled many more breakthroughs to be achieved by the entrepreneurs of the region. Perhaps Charles Bage, an adopted Shropshire lad, deserves the greatest accolade of all, that of the Man Who Built the Modern World. The Ditherington Flax mill would, then, be that Modern World's foundation stone.

1Iron boats, chapels, and coffins were among Iron Mad Jack's accomplishments. Iron picture rails and ceiling roses are among other over-enthusiastic iron-made items being exhibited at Blists Hill open air museum in the Iron bridge Gorge.2Another entrepreneur of this new Iron Age.3The first of these was split even to the extent of separate front doors for the girls and the boys.4Enlightenment Thinking centred on the 18th Century and central to it was a belief in reason, knowledge, empirical observation and a questioning spirit. It is strongly associated with ideas of equality and liberty.5Not only author of Robinson Crusoe and Moll Flanders, but a writer of much social commentary, and many pamphlets and political tracts.6Machinery and stock as well as buildings.