Football Widows Content from the guide to life, the universe and everything 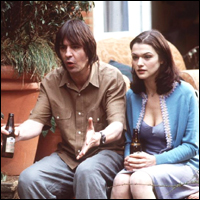 Long before the term WaG1 was popular there was a whole different breed of wives and girlfriends associated with the sport of the masses. These women suffered (and continue to suffer) for their love of a football2 supporter rather than the more glamorous player. Unfortunately, being a football widow doesn't have the rich pay-off of being a WaG so the challenges involved and the sacrifices made are so much greater.

The term football widow doesn't involve anyone's actual death but it does involve the loss of a loved one to football. This entry will explore the problems of being a football widow and look at some options to minimise that loss.

The first sign that a woman has become involved with a football supporter is his reluctance to make any plans for a Saturday. This is an obvious signpost but is missed by many infatuated girls in the first flush of love. These girls tend to assume that the man of their dreams is just being one of the lads; playing football on a Saturday morning then visiting the pub for a debrief afterwards. She should be wary though when the team debrief goes on until early evening to be followed by a short nap, dinner - prepared by her and then cleared just in time to settle on the sofa for Match of the Day.

This all seems harmless enough but it shouldn't be underestimated as it's clearly the first step on the road to football widowhood.

Before long some members of the club will decide that instead of the all-afternoon debrief it would be a great idea to actually launch a supporters club. This they'll do without any consultation and before the unsuspecting girlfriend/wife knows he'll be off on a bus every other (or possibly every) Saturday afternoon. The home fixtures of the team won't eat too much into the Saturday evening routine but the away fixtures may run late into the evening.

Very soon the only possible Saturday night outing will be the football team do - and even then that's only allowed because Match of the Day will be shown on a large screen at the chosen venue.

At this point the football widow will still think that she's in with a chance to change him, maybe marriage or children will make a difference but to the football supporter these are just distractions.

This is the last point at which the female can escape and escape should be considered carefully. The wedding date will be the first bone of contention. If you have to get married on a Saturday never select a date in the football season or in a World Cup year. This will leave you with a wedding date in June, July or early August for three out of four years. This means that the calendar for officials in these few weeks is booked up well in advance. So, unless you're prepared to join a long waiting list you may be better to consider marriage on a week day.

When my late mother announced the date of her wedding to her brothers and the rest of the family, there was a deathly silence. 'Yer kidding luv surely? That's chuffin' Cup Final Day!'
None the less, the wedding took place. How many non-football fans can tell you the exact date of the 1947 Cup Final, and that Charlton Athletic beat Burnley 1-0 that year in extra time on a scorching hot day.
an h2g2 Researcher

The week day wedding isn't just as straightforward as it may sound however. Nowadays football is played on Tuesday, Wednesday and sometimes Thursday evenings so the groom who is by now an established football fan not only watches his own team's games but is fixated on the play of other teams both in the league and in Europe. This means that if you decide on a week day wedding that coincides with an important mid-week match be prepared to lose the groom (and half his guests) during the reception as they will watch the match in the public bar.

Just be wary of the surprise honeymoon involving European Capital cities or unusual South American countries – this will be a ploy to tour the major football stadium and will be painful on the feet as well as the pocket. Honeymooning on the off season should eliminate the distraction of having to watch any actual football (unless there are any pre-season friendlies or exhibition matches).

The decision to have children in the first place isn't one that should be taken lightly and while the football fan is readily available for the conception provided there isn't a match on - the delivery however, is another matter entirely.

On no account should the football widow go into labour on a Saturday if she wants her partner in attendance. He will (if it's early) assure her that he'll be back in plenty of time and promptly disappear into the crowd. His mobile will be unobtainable because while at the match he will be listening to another match on the radio and be unable to hear the theme from Match of the Day - his ringtone. Best wait until off season or the middle of the night if possible.

When the child is born there will be great celebration at the supporters club with much wetting of the baby's head. Gifts will arrive from the mates but they will inevitably be football scarves or miniature football skips (whether baby is boy or girl) and a teddy in full football kit of course.

If baby is delivered during the season Mum may very quickly be enjoying quality time home alone with him or her because Dad will still go to the match under the guise of showing off the photos. Really, it's best to take Dad at his word on this because should he be restricted to the house and left to watch/listen to the match instead, all the screaming and shouting abuse or indeed celebration will upset the baby just when it's been settled.

Never, no matter how much pressure is applied, agree to giving the baby the names of the entire football squad. Sure, this will get your photo in the local press and coverage on local radio and news but it isn't worth it. Remember that the poor child will be stuck with the ridiculous names 30 years later when no-one will have any idea who the footballers were.

The football widow will be more or less solely responsible for the new baby for the first four to five years of it's life. By five years old the child will be enrolled in all manner of football clubs and you will be expected to ferry them around to mini-league matches - and stop Dad from attacking officials and slagging off the oposition. This is the only point when Mum can stop junior from becoming a second generation football fanatic.

Things tend not to get any better with the football fan, it's seldom a passing phase and it's generally best just to knuckle down and get on with living with the consequences of your mate's obsession.

Where possible invest in a second television because with all the satellite and cable stations there is an awful lot of football on screen to be watched and the portable in the bedroom is where you'll be relegated to to watch your own choice of television.

Get used to reading the tabloid daily's since they provide the best football coverage and only newspapers with enough back pages of every league in the world will be worthy of purchase.

Enjoy shopping trips with friends or family on Saturdays because you'll always be free.

Aye I gave the wee woman a good night out. I took her to see Tranmere Rovers reserves. But it wasn't our wedding anniversary, it was her birthday. Can you see me getting married in the football season?
- Bill Shankly

Arrange birthdays, parties, anniversaries and other family get togethers on Friday nights as they're normally football free (World Cup year being the exception).

Be prepared if he supports a successful team to have him disappear off to European matches with the supporters club and these jaunts can take anything from three to ten days. This in turn may mean you will have to forego the family holiday due to his lack of annual leave and funds.

If his team are less successful or are having a run of bad luck be prepared for his mood swings and bouts of depression which may result in him having several unscheduled 'duvet days' and you tiptoeing around him.

Some people believe football is a matter of life and death. I'm very disappointed with that attitude. I can assure you it is much, much more important than that.
- Bill Shankly

Don't panic if you see him slumped, tearful, head in hands and moaning things like 'Gutted', 'Devastated' or various abstract expletives. It is unlikely he's run over the cat or received a shocking diagnosis it's probably just that his team has lost a match, scored an own goal or were even beaten in a European Cup final. Just make tea and remember to use a plastic cup in case it has to be thrown at a wall or the television when result is broadcast again ... and again ... and again.

Never, ever say things like 'It's only a game' or 'You can't expect them to win every time' as this will only result in his alienation. Living with a football fan is never an easy option.

Shankly's wife: 'You love that Liverpool more than you love me!'
Shankly: 'I love Everton more than I love you!'

Finally, Alistair McGowan and Ronni Ancona have written a book on the subject of weaning a football fan off the sport. It explores Alistair's shock and withdrawal symptoms when unable even to read the results and match reports. A Matter of Life and Death (Or How To Wean Your Man Off Football) is a part comic and part self-help book so worth a read if you're determined to try and change your man and leave football widowhood for good. Alternatively you could just switch sides and join the club with him.

1Short for Wives and Girlfriends, usually of footballers but can apply to other group sports or activities.2Also known as soccer in USA, Canada, Australia and Eire.