The Screwfix Catalogue Content from the guide to life, the universe and everything 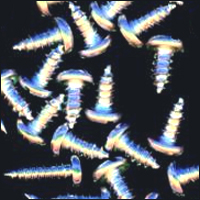 It's a man thing.

Every quarter the Screwfix catalogue lands on the doormat with a light thud and a brief rustle of cellophane. Garishly coloured, it looks suspiciously like junk mail, but any wife who unthinkingly slings this rare and precious gift into the recycling bin will shortly be on the receiving end of divorce proceedings. It needs to be tucked inside the rest of the pile for one of life's little pleasures - sorting the mail at the breakfast table.

Credit card bill: open that in a minute... Someone selling broadband: bin it... Letter from your mother... Oh, Screwfix catalogue!

A boyish smile breaks out and a burst of a yet-to-be-identified hormone oozes into the male bloodstream. The rest of the mail is subconsciously laid on the table, where it will remain unsorted. The catalogue's plastic wrapper is removed carefully, to savour the moment, and its glossy, ultra-thin pages are fingered with childlike anticipation. This is Christmas, Easter and birthday rolled into one. The rest of the conscious world fades into the middle distance as the male opens it up and dreams of an alter existence. He's 'Handy Andy' from Changing Rooms. He's Isambard Kingdom Brunel. He's Bob the Builder.

Screwfix is a UK business which supplies both the building trade and DIY enthusiasts with just about everything they need, and a whole lot more they don't. Based in Yeovil, Somerset, they run a successful mail-order and online operation and also have around 150 branches across the country. In 2009, they stocked around 18,000 lines and shipped 15,000 parcels daily.

But it's the sheer breadth and detail of the stock in the catalogue which captivates alpha male, who, as his breakfast goes cold, becomes lost in a reverie of fittings, attachments and accessories. Will the zirconium-coated '60-grit' sanding belt be as good as the standard '80 grit'? Can you get decorator's caulk that can be overpainted within one hour? What's the best panic latch hardware for a fire door?

It's knowledge. You learn what the correct terminology is for those tools and materials you see out and about. If you want to converse with authority among like-minded people at the pub or over the garden fence, then it's essential. That orange plastic net-like fencing that comes on a roll? It's 'barricade fencing'. Those tan-coloured fur-lined boots which you wouldn't be seen without on a construction site? They're 'rigger boots'.

Coping with a Screwfix Junkie

Don't expect to hold a meaningful conversation with a man who's on a Screwfix trip. If you're lucky, he might offer you a few random thoughts as he peruses the more obscure pages, but it's strictly a one-way channel:

Did you know you can get those polyester-cotton builder's trousers in pirate cut, now? Should improve ventilation!

We could have a sliding door in the bedroom. Just need to fit this ball race. It doesn't even need a rebate.

I don't know what we did before we had plastic shims.

Just nod politely. He'll eventually return in his own time. Just be prepared for him keeping the catalogue on the bedside table for a couple of weeks afterwards.