The Munich Agreement: Peace For Our Time? Content from the guide to life, the universe and everything 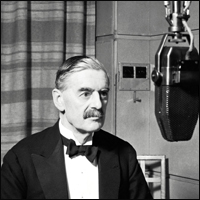 My good friends, for the second time in our history, a British Prime Minister has returned from Germany bringing peace with honour. I believe it is peace for our time. Go home and get a nice quiet sleep.
– Speech by Neville Chamberlain to the British people given outside 10 Downing Street (30 September, 1938)

In the course of just four and a half years, the oh-so-ironically named 'Great War' of 1914 – 1918 accounted for around 16 million lives, including some seven million civilians. It is hardly surprising then that, in its aftermath, the people and politicians of Europe were for the most part determined to avoid another such war at all costs. When Adolf Hitler and the Nazi party started making aggressive noises regarding the need of the German people for Lebensraum1, the official policy of the British Government under Prime Minister Neville Chamberlain was one of appeasement.

Not as tyrants have we come, but as liberators.
– Speech by Adolf Hitler to the Austrian people (25 March, 1938)

On 13 March, 1938, Germany completed the Anschluss2 of Austria, an act specifically outlawed by the Treaty of Versailles and the Treaty of Saint-Germain-en-Laye, signed at the end of the First World War3. Although the Anschluss was marked by troops and tanks crossing the border from Germany to Austria, there was no actual fighting. In fact, many Austrians were sympathetic to the Nazi party's efforts in rebuilding Germany after the war and welcomed the invading soldiers. Having succeeded in 're-uniting' Germany and Austria, Hitler's territorial ambition grew.

Looking east, a considerable length of Germany's border was adjacent to what is now the Czech Republic. At that time, the region was part of Czechoslovakia, an 'artificial' country created at the end of World War I from part of the former Austro-Hungarian Empire. The region immediately over the border from Germany was known as the Sudetenland, and was the home of a large German-speaking population. As with Austria, Hitler saw the Sudetenland as part of a Greater Germany, and his speeches grew ever more aggressive in their demands for unification. By May 1938, it had become clear that German generals were planning the invasion of Czechoslovakia4.

At the time, Czechoslovakia had treaties with France and the Soviet Union, and expected, quite reasonably, that these countries would come to its aid in the event of a German invasion. Unfortunately, the French military had not fully recovered from World War I and the government felt unprepared for conflict. While the USSR had declared their intention to assist Czechoslovakia providing they were supported by Britain and France, the Western powers excluded the Communists from their plans.

In a desperate attempt to stave off a European war, Neville Chamberlain dispatched an ambassador, Lord Runciman, to Czechoslovakia to persuade them to accept the German demands. The Czechoslovakians were, understandably, reluctant. Lord Runciman seems to have paid little heed to their feelings, however, reporting back to the British government that the merging of the Sudetenland into Germany was 'a natural development'.

On 15 September, Chamberlain himself visited Germany, talking with Hitler at the Führer's alpine retreat in Berchtesgaden. Here, without any form of agreement or consultation with the Czechoslovakian government, he agreed with Hitler that the Sudetenland should be ceded to Germany. Later that week, the French Prime Minister, Édouard Daladier, came to a similar arrangement with Hitler, again with no Czechoslovakian representation. These agreements were further formalised in London, where the British and French premiers created a proposal that all areas of Czechoslovakia where more than half of the population were German be returned to Germany. If the Czechoslovakian government were still waiting for their invitation to the meeting to turn up in the mail, they were to be disappointed again. Initially they resisted the Anglo-French proposal, but by 21 September had realised the futility of holding out and reluctantly agreed.

With the agreement – however unwilling – of the Czechoslovakian government, Chamberlain travelled to Germany on 22 September for a second meeting with Hitler. Expecting to achieve a settlement and lasting peace, Chamberlain was stunned to find that Hitler had altered the terms of the deal. Instead of merely handing the Sudetenland over to Germany, Hitler was now insisting that the Czechoslovakians submit to an immediate German military occupation of the region, with non-German Sudetans given one week to leave.

Still convinced that his appeasement policy was the best way to avoid war, Chamberlain agreed to put the new proposals to the various interested parties. To no one's great surprise, the Czechoslovakian government rejected the new terms, as did the French and Chamberlain's own Cabinet5. Seeing no other option, the Czechoslovakian army began to mobilise, as did their French allies. Was there time for one more attempt to appease Hitler and prevent the outbreak of war?

The settlement of the Czechoslovakian problem, which has now been achieved is, in my view, only the prelude to a larger settlement in which all Europe may find peace.
– Speech by Neville Chamberlain given at Heston Aerodrome on returning from Munich (30 September, 1938)

At this point, a new player entered the proceedings: Benito Mussolini, the fascist Prime Minister of Italy. At the instigation of him and Chamberlain, a meeting was convened in Munich at which the four major powers – Germany, Britain, France and Italy – would thrash out an agreement. Almost unbelievably, the Czechoslovakians were still excluded from the meeting, as were the Soviets.

The subject of the meeting was a plan introduced by Mussolini, the gist of which was little different from the last proposal agreed between Chamberlain and Hitler: occupation of the Sudetenland by the German army by 10 October, with an international commission convened to decide the future of any other disputed areas. Thoughtfully, the British and French offered Czechoslovakia a choice: they could either resist Germany alone, or agree to the new proposal. Hobson would have been proud.

I had another talk with the German Chancellor, Herr Hitler, and here is the paper which bears his name upon it as well as mine.
– Neville Chamberlain, Heston Aerodrome (30 September, 1938)

The day after the Munich Meeting, Chamberlain had a private meeting with Hitler at which they both signed a peace treaty affirming that Britain and Germany would pursue diplomatic means to resolve future conflict and avoid war. Later that day, Chamberlain returned to Britain and made two speeches to the British people stating that war between Britain and Germany would not happen. The first was made from Heston Aerodrome, almost immediately after he had returned from Munich, while the second, more famous 'peace for our time' speech was made later from Downing Street. Chamberlain also joyously brandished the agreement he had persuaded Hitler to sign. It is not difficult to imagine Hitler sitting at home with his copy, casually screwing it up and tossing it into the waste-paper basket. Incredibly, what Chamberlain and Daladier had no way of knowing at the time was that the Munich agreement had actually been drafted for Mussolini by the German government.

In the immediate aftermath of Munich, the 'peace' agreement enjoyed great popularity back in Britain. The general feeling was that no one wanted to get involved in what Chamberlain referred to as 'a quarrel in a far-away country between people of whom we know nothing'. There was also a sense that some of the wrongs done to Germany by the Allies in the aftermath of World War I were being redressed. With the benefit of hindsight, it is easy to criticise Chamberlain and his policy of appeasement. However, it is fair to say that, even by the time of the Munich meeting, there was clear evidence that Hitler would not be satisfied with the concessions that were being granted. The fear of war in those who lived through World War I was so great that perhaps they were determined to see a reasonableness in Hitler that was never there.

The Road to War

I venture to think that in future the Czechoslovak State cannot be maintained as an independent entity. You will find that in a period of time which may be measured by years, but may be measured only by months, Czechoslovakia will be engulfed in the Nazi regime.
– Speech by Winston Churchill in the House of Commons (5 October, 1938)

Clearly, Hitler had no intention of honouring the Munich agreement or his treaty with Chamberlain. Six months after the Munich meeting, Hitler annexed the rest of Czechoslovakia, creating a new country of Slovakia (in reality a puppet state of Germany) and allowing Hungary and Poland to take portions of the country for themselves.

At this time, it finally dawned on Chamberlain that his appeasement policy had failed. Fearing that Hitler's next move would be to try the same trick with Poland, he signed the Polish-British Common Defence Pact, promising British military aid in the event of a German invasion. Simultaneously, Britain and France began to devote their efforts to increasing their military capability in preparation for the by now almost inevitable war. On 1 September, 1939, Hitler's army did indeed invade Poland and the rest is history.

1Literally, 'living space'.2Annexation or 'link-up'.3The Treaty of Versailles regarded Germany, whereas the Treaty of Saint-Germain-en-Laye regarded Austria.4This did not include General Beck, head of Oberkommando der Wehrmacht, who resigned his post because he opposed the invasion. He was later involved in a plot to assassinate Hitler.5The formal group consisting of the most senior British government ministers, hand-picked by the Prime Minister.