Project Daedalus - Interstellar Spacecraft Content from the guide to life, the universe and everything 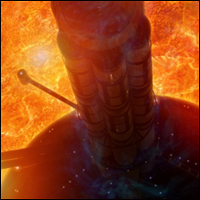 Is the human species yet at a technological level where it could travel to another star? Could we build a functional, practical, reliable interstellar spacecraft? The first serious investigation to seek to answer this question was Project Daedalus in the 1970s.

The project was named after the mythical Greek inventor Daedalus, who invented a method of flying to escape from imprisonment on the island of Crete. The idea of the project was to see if it could be done, to come up with a design that could work and perform the task – not something to put into production, but a paper and theoretical design that could prove whether or not humankind had the ability to do this.

The project was undertaken by the British Interplanetary Society1. The idea was first raised by Alan Bond (also involved in the HOTOL project) in 1972. Following discussion with other society members, they decided to raise the proposal at a society meeting in 1973. Much to their delight, the proposal was greeted with much interest and discussion.

The project itself was undertaken between 1973 and 1977. In true engineering style many of the meetings and discussions occurred in pubs in London2. It was led by Alan Bond and had a core team of about a dozen scientists and engineers, although many others were involved as required.

In order to have a realistic design, the project team established a basic list of requirements for the spacecraft. It should be:

Although flexibility in choice of destination was a design requirement, the project team still needed to select a particular star so they could plan the mission. This baseline could then be modified for other destinations. At the time there was some evidence that Barnard's Star might have a planet in orbit. It has since been shown that the evidence was unreliable and it is not currently thought this star has any planets, although this area of research is constantly improving and making new discoveries.

The mission was for the spacecraft to reach Barnard's Star, a distance of 6 light years or 5.7 trillion kilometres, in 50 years and then conduct various scientific investigations. This meant that the craft would have to achieve a velocity of 12% the speed of light, or 36,000 km/s. This is well beyond the capabilities of chemical rockets and thus an alternative propulsion system had to be designed.

The final propulsion proposal borrowed the idea of a nuclear pulse rocket from Project Orion3 but instead of nuclear fission, Daedalus was to use a technique called Inertial Confinement Fusion4. This uses small pellets of deuterium and helium-3, which would enter the combustion chamber one at a time. Here they would be detonated by electron beams within a magnetic confinement field which would funnel the generated plasma into a jet. Essentially it sets off a very small nuclear explosion and contains and directs it to provide thrust. This method has since been superseded but was the highest fusion technology available at the time.

Helium-3 is very rare on Earth but can found in the clouds and atmosphere of Jupiter. The mission plan was to set up a mining operation on Jupiter. It would use balloons to support robotic factories which would extract the helium-3 from the atmosphere and then transfer it to Daedalus. The extraction process was expected to take 20 years.

In order to reach the desired 12% of light speed target, the craft would have to accelerate for four years. The acceleration required would mean using 250 pellets a second. This obviously requires a large amount of fuel. In fact the fuel was the major part of the mass of the craft and in itself would require a huge amount of thrust to move. The engine design ended up being a two-stage one with a large first stage which consumed the majority of the fuel and provided most of the acceleration.

The engine firing/use profile for the four years of acceleration were:

After the second stage had shut down, it was still a useful component and thus was not designed to be jettisoned. The reason for this is that the engine design included a large 40m-diameter bell (or hemisphere) and this could double up as a communications dish after stage 2 shutdown. This meant not only that the continued mass of the engine was still a useful component, but also that the extra mass of a separate communications dish was not required.

In space, deceleration takes as much fuel as acceleration. Due to the velocities and fuel requirements involved, there was no deceleration planned. This meant that the craft would race through the Barnard's Star system at 12% the speed of light, spending only a few days there before hurtling on to an uncertain end. As this is not long enough to do a worthwhile investigation of the target system, Daedalus was designed with a payload of scientific equipment and probes which could slow down and remain in the system.

Daedalus would carry 18 autonomous probes with their own AI control systems as part of its payload. After 25 years' mission time, and thus half way to the destination, the on-board systems would analyse the target system for planets and their makeup. This would consist of photography and scans which would be sent back to Earth for analysis. Once analysed, the mission objectives and flight paths through the target stellar system could be sent back to Daedalus, which would feed them into the probes ready for deployment.

The probes themselves would be deployed 7.2 years and 1.8 years ahead of the main craft arrival date. The probes were to use nuclear-powered ion drives to slow themselves down and manoeuvre through the target system. Each would carry sensory equipment such as cameras and spectrometers. They would then fly through the system using the pre-plotted course, analysing any planets for any signs of biology or life. The data obtained would be transmitted back to the main craft for transmission to Earth.

No cost estimate was ever produced for the craft as it was an exercise in design and investigation and not intended to be produced as laid out. Indeed, the authors of the study were well aware that the cost would be prohibitive and practically impossible for society as it is now. It also required a lot of infrastructure to be in place. The gas extraction on Jupiter would in itself be a huge engineering, logistical and economic feat. It would also require an orbital construction base which again would be excessively costly and logistically challenging.

The authors are quoted as saying:

… fits naturally into the context of a solar system-wide society making intelligent use of its resources, rather than a heroic effort on the part of a planet-bound civilization.

The design was flawed. This was inevitable and was recognised by the authors as representing only a first approximation to the solution of interstellar spaceflight. Nothing as complex as an interstellar spacecraft is going to work purely from the paper designs. But what it did was to provide a baseline for future work. It looked at what was required and how that could be achieved without going into the realms of science fantasy.

In this it has excelled and even 30 years later it is still a valuable reference work for various space agencies. The legacy is huge in terms of realising what is and is not achievable. To put it simply, it was a case of aiming high and anything gained in reaching for that goal would be a significant gain.

It also, at the time, brought the idea of realistic interstellar spaceflight back into the public imagination.

The British Interplanetary Society and Tau Zero Foundation5 are planning a symposium in September 2009 to initiate a two-year project to redesign Daedalus.

So the answer to the original question seems to be - technically? Probably yes. Economically and socially? Definitely not.

1Founded in 1933, this international organisation is the world's longest established society dedicated to the promotion of astronautics both nationally and internationally.2The society used to meet in the Mason's Arms pub on Maddox Street which was a venue featured by Arthur C Clarke in his Tales from the White Hart collection.3An earlier US project to investigate advanced designs.4This concept was introduced by Friedhart Winterberg around 1970.5The Tau Zero Foundation is a volunteer group of scientists, engineers, entrepreneurs, and writers working towards practical interstellar flight.