Gates in Constant Use Content from the guide to life, the universe and everything 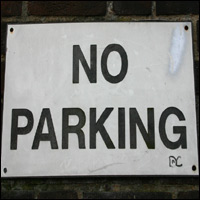 It's the bane of the car driver. You've cruised around urban streets for hours looking for a space to park, when up ahead you spy something wonderful: a three-metre gap. 15 minutes and approximately 77 separate manoeuvres later, you have painstakingly parallel-parked your 2.9-metre vehicle into the space. Your arms ache as you switch off the engine, gather your things together then climb out of the seat. As you lock the car you glance up and notice a sign scrawled in white chalk on a wooden fence:

NO PARKING – GATES IN CONSTANT USE

A quick inspection of the gates – the rusting hinges, the climbing bindweed – tells you that this entrance has not been used in recent times, perhaps not since Queen Victoria's Diamond Jubilee. The gates couldn't physically be opened without crumbling to dust. Yet, you know that if you leave your car there, even for a few minutes, you will return to the sight of at best a snotty note stuffed under the windscreen wipers, and at worst a dazzling glow of flashing blue lights on the surrounding buildings, as police squad cars seal off the entire neighbourhood while law enforcement officers take statements from witnesses who saw you leave, and others attach your car to a tow truck.

If challenged, you might want to point out to the sign owner a small point of English usage. It's that word 'constant'. It means 'unchanging'. If the gates were used, say, once per hour, then they will always be used once per hour. As it is clear in this case that the gates have not been used for the last ten or more years, then a constant usage defines that they will not be used within the next ten. You may therefore park there without risk of impeding anyone's passage.

Now, if they'd instead used the words 'GATES IN CONTINUAL USE', then this is subtly different. Yes, it implies an element of frequency of use, but there could be intervals between such times – parking is not recommended. 'GATES IN CONTINUOUS USE', however, is not correct usage here – it describes a situation where the gates are open and vehicles are entering or emerging without interruption.

So there you have it: a lexicographer's guide to urban parking protocol for the next time you're in this situation. Or you could take the bus.