Posterior Vitreous Detachment Content from the guide to life, the universe and everything 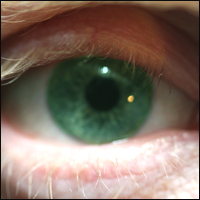 Situated between the lens and the retina of the eye is a jelly-like substance known as the vitreous humour. Consisting of dissolved salts, sugars and proteins (mainly collagen type II), the vitreous humour and more fluid aqueous humour situated in front of the lens provide a clear medium through which light can pass to produce an image on the retina. They also exert an outward pressure which maintains the shape of the eye.

The vitreous humour is in contact with the retina and helps to keep it in place by pressing it against the choroid - the layer of tissue lining the inside rear of the eye. However, it only adheres to the retina in three places: around the anterior border of the retina; at the fovea, the tiny spot in the retina which provides us with our 'detail' of colour and vision; and at the optic nerve exit (or 'blind spot') where the eye is connected to the brain by about 1.2 million nerve fibres (axons).

Unlike the fluid in the aqueous humour, which is continuously replenished, the vitreous humour is stagnant. Therefore, if blood, cells or other debris get into the vitreous humour, they will remain there unless removed surgically. When light hits these pieces of tissue, they cast shadows onto the retina which appear to float across our field of vision - hence are known as 'floaters'.

As we age the vitreous humour gradually becomes more fluid. As it does so, the vitreous mass gradually shrinks and falls away from the retina. This is known as 'posterior vitreous detachment' (PVD) and commonly occurs after the age of 40. Indeed, it is often said that the percentage chance of this occurring is the same as one's age in years.

Commonly, a person experiencing PVD will report seeing flashing lights and/or an increase in the number of floaters in their field of vision. The flashes of light occur as the vitreous humour separates from the sensory layer of the retina. The mechanical force of the vitreous pulling on the retina is transformed into nerve signals, which are then interpreted as light by the brain.

In short-sighted (myopic) people, where the shape of the eyeball is elongated from front to back, thus putting more strain on the vitreous, a PVD may occur at a younger age than normal.

A PVD can also occur after injuries to the eye or inflammation in the eye (uveitis). It is also more likely to occur following a cataract operation.

In most cases, the vitreous humour makes a clean separation as it pulls away from the retina. Occasionally, however, the vitreous humour will cause a tear in the retina at those places where it is adhering. This will enable fluid to seep between the retina and the choroid, causing a retinal detachment. This may be accompanied by vitreous haemorrhage (bleed) and is a very serious, sight-threatening condition.

The symptoms that may indicate a retinal detachment include:

No treatment is usually required for uncomplicated PVD (floaters), since these are relatively 'massive' and over time tend to sink below the line of sight and become invisible. This happened to the author as I first experienced floaters some four years before a retinal detachment. In the intervening period I was not aware of any floaters. In some cases the floaters may become visible after rapid eye movements or lying flat for some time, but they generally aren't a problem.

If the floaters seriously affect your sight 2, or in cases of retinal detachment, it becomes necessary to surgically remove the vitreous humour and use the pressure of an injected fluid to push the retina back against the choroid. This operation is known as a vitrectomy.

On the night before the operation, this author was required to instil one drop of cyclopentolate ('dilating drops') to keep the pupil of the operated eye large. On admission to the hospital, a nurse regularly applied such drops until the time of the operation.

It should be noted that cyclopentolate eye drops can cause blurred vision which may last several hours. (You are advised not to drive or operate machinery unless your vision is clear.)

How is the Vitreous Jelly Removed?

Nowadays, surgery is usually performed under a local anaesthetic, although the surgeon may opt to use a general anaesthetic if they deem it preferable or necessary.

The patient, who is permitted to wear their own clothes, lies on an articulated table. A cloth is used to cover both eyes, although there is a hole over the eye destined for surgery.

Three very small incisions are made through the sclera - the white of the eye - to accommodate a fibre-optic light source, a cutting/suction device to cut through and remove the vitreous humour, and an infusion port to facilitate introduction of a fluid to maintain pressure within the eye, both during the procedure and after the operation.

As only a local anaesthetic is used, under the bright lights of the operating theatre it is possible to see approaching instruments through the face-cloth. This author found it preferable to focus on distant objects so as not to see the instruments!

Once the vitreous humour has been removed, the retina is repaired, if necessary, and any foreign bodies removed. In the case of diabetic patients, any leaking blood vessels are sealed. The procedure usually takes one to two hours, although in this author's case it took 45 minutes.

Since the local anaesthetic causes numbing of the lids and temporarily prevents blinking, an eye patch is applied immediately after surgery. It is most important to keep this patch on until you are able to blink normally. Begin using drops after the patch has been removed.

The vitreous humour is replaced with saline to maintain the pressure. Then an air or gas 3 bubble, or silicone oil bubble, is inserted so that it pushes against the re-attached segment of retina, holding it in place while scarring and healing occur.

If an air or gas bubble is inserted, this is absorbed and replaced naturally with isotonic fluid (aqueous humour) over about two weeks. If silicone oil used, this is not absorbed and has to be removed surgically at a future date.

Silicone oil is a clear, viscous fluid which may be used instead of gas. Its main advantages are:

This procedure has a high success rate, but potential complications include post-operative bleeding, serious infection 4, retinal detachment and increased risk of cataracts.

A major factor determining the success of a vitrectomy operation is ones ability to comply with post-operative instructions/recommendations. This will be determined by the location of the retinal tear.

In this author's case, the right eye was affected and there was a retinal tear close to the nose. Thus immediately after the operation, I was wheeled from the operating theatre in a wheel chair, having been instructed to sit with my head down between my knees. I was then provided with a bed in a side room where I had to lie face down for three hours. (The provision of a radio was a God-send!)

On arriving home, I was instructed to sit with my head in an upright position for 50 minutes in each hour; the remaining ten minutes being a break to walk around/sit normally. This was suggested as being the ideal time to get oneself a drink or meal. At night, I was instructed to sleep with my right cheek to the pillow. As I had had my eye filled with air, this position ensured the area of the retinal tear was kept dry, facilitating healing.

This author was prescribed a combination of three types of drops to be used regularly after discharge. These had to be administered in the order shown with a ten-minute gap between each type of drop. They included:

This author was given a follow-up appointment four days later, and was 'signed off' work for 28 days.

I was informed that I would be unable to see anything with the affected eye on the first day following the operation, and that sight would gradually improve day-by-day after that. Optimal vision may not be achieved for several months. This, indeed, is what was experienced.

On Day 2, this author could see white light; on Day 3 colours could be discerned; and by Day 4 the shapes of objects could be discerned. Interestingly, as the eye re-filled with fluid, the meniscus could be seen as a black line, which was inverted due to the way in which the eye works. (Although in practice the air bubble is above the meniscus, it appears to be below it.)

An emerald green spot was visible in the centre of the meniscus, with a purple band above and below. As the air bubble was absorbed, so the meniscus gradually appeared lower and lower in the eye, vision being clearer through the fluid above the line. As the fluid within the partially filled eyeball is very mobile, a most peculiar effect is that this sloshes around as the head is moved. This heightens your awareness of the condition, thus providing a reminder of the need to keep your head reasonably still during the healing process.

At the follow-up appointment, the chloramphenicol and cyclopentolate eyedrops were withdrawn and replaced by 'Cosopt'. This is a preparation containing two active ingredients designed to reduce pressure within the eye by inhibiting the production of aqueous humour. This had to be administered ten minutes after the Maxidex, but only twice a day.

Patients who have had an air or gas bubble inserted are advised to avoid flying. The reduced atmospheric pressure causes the gas bubble to expand, raising the pressure in the eye to perhaps dangerous levels. Furthermore, the increased intraocular pressure caused by flying with an air bubble can prevent blood from reaching the retina and blind the recovering patient.

1This phenomenon may also occur as a result of amaurosis fugax, in which a transient ischaemic attack ('mini stroke') produces a descending curtain that clears again within minutes of the attack. Amaurosis fugax also requires urgent medical attention. 2Given the risks inherent in any form of surgery, the impairment from floaters would have to be fairly severe to consider victrectomy. 3The gases used are chemically unreactive and biologically compatible. Typically, either sulphur hexafluoride or perfluoropropane are used. A device known as a 'retinal tamponoid' is employed to hold the retina in place or temporarily seal off holes in the retina.4Eye infections are sight-threatening and can spread to the brain. 5Chloamphenicol is a 'broad spectrum' antibiotic, meaning it is effective against a wide variety of microorganisms. It was the first antibiotic to be manufactured synthetically on a large scale. Its main use is in eye drops or ointment to combat bacterial conjunctivitis.6Cytokines are groups of at least 20 proteins, including interferons and interleukins. They are the hormones of the immune system, mediating interactions between immune cells, and having pathological as well as protective actions on infectious diseases.