Examining the Cranial Nerves Content from the guide to life, the universe and everything 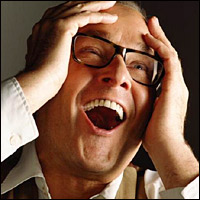 The cranial nerves are among the most important in the body as they accept input from the eyes, nose, ears and tongue and are responsible for skin sensation and various muscles in the face. Detailed coverage of the nerves is available in the Cranial Nerves Entry. This Entry, on the other hand, looks at the medical examination of the cranial nerves.

There are a number of diseases which may affect each of the cranial nerves or a combination of them on either or both sides, and so this Entry will not pretend to be able to cover them all. However, there are a number of causes which can affect any of them. These include trauma to the head, diabetes mellitus, multiple sclerosis (MS), systemic lupus, stroke, brain tumours, damage to the nerves or brainstem, sarcoidosis1, vasculitis2, chronic meningitis3 and syphilis4. If you are really worried that you may have a problem with your cranial nerves, you're best off talking to a doctor.

The olfactory nerve is the sensory nerve that deals with smell. Thus, the first cranial nerve is tested by getting the patient to differentiate between different everyday smells such as mint and cinnamon, one nostril at a time. A lack of smell is known as anosmia, but may sometimes be due to something as mundane as an infection.

The optic nerve is the sensory nerve that deals with sight. It is therefore the most laborious to test as it is necessary to go through four steps:

The third, fourth and sixth nerves are motor nerves that control the movement of the eyes, and are thus bundled into one easy test. All in all, there are six muscles per eye, arranged to move the eye in six directions:

Note that lateral means 'away from the midline of the body', while medial means 'toward the midline of the body'. The above muscles are all controlled by the occulomotor nerve except for the lateral rectus and the superior oblique. The lateral rectus produces a movement known as 'abduction', or moving away from the midline, and is thus controlled by the abducens nerve. The superior oblique muscle passes over a pulley known as a 'trochlear' so that it pulls the back of the eye upwards (and therefore makes the eye look downwards), and is thus controlled by the trochlear nerve.

With this knowledge in mind, testing these three nerves is straightforward. The patient is presented with a target such as a pen lid or finger to look at, and is then asked to follow the target as it makes a large 'H' shape in front of them8. By watching the eyes, it is possible to detect signs of nerve damage. The accommodation reflex, which allows the eyes to focus on objects close-up, can be tested by moving the target closer to the nose and then asking the patient to focus on a wall and then on the target. Any double vision, especially when looking downwards past the nose (indicates damage to the trochlear nerve), should be noted, as should any nystagmus9.

The trigeminal nerve has three aspects to it, each of which can be tested. The sensory part of the nerve has three branches covering the forehead (opthalmic region), the region above the upper lip (maxilla), and the jawbone (mandible). Sensation over each of these regions should be tested for both sides. The sensory part of the nerve also covers the corneal reflex, whereby the patient will blink if their cornea (the transparent covering at the front of the eye) is touched with a strand of cotton wool. While an absent corneal reflex is one of the earlier signs of trigeminal nerve problems, it is not a pleasant test and should only be conducted with reason. The third aspect of the trigeminal nerve is the motor branch. This controls the muscles of the jaw and can be tested either by getting the patient to open their mouth, or by tapping a finger placed in the dip below the lower lip in order to elicit the jaw jerk reflex.

Out of all the nerves, the facial nerve is possibly the most fun to test, although a nervous patient may need to be led by example. The patient is asked to:

Rarely, taste (via the facial nerve) is tested using sugary and salty water.

The vestibulocochlear nerve is responsible for both hearing and balance, but it is generally hearing that is tested here10. While problems with hearing may be due to nerve damage, other causes include ear infection and degeneration of hearing over time. A simple hearing test consists of the following:

IX and X - Glossopharangeal and Vagus

The accessory nerve controls the sternomastoid muscles and the trapezii. For the former, the patient is asked to turn their head to the left and to the right; for the latter, the patient shrugs their shoulders. Both tests are performed against the examiner's hands in order to provide resistance for the muscles to work against.

The patient is asked to stick out their tongue - the tongue will deviate towards the side of a twelfth nerve lesion. Leading by example is usually unnecessary.

1A disease causing small disruptive growths in various parts of the body.2Inflammation of blood vessels.3Infection of the meninges, the membranes that surround the brain.4An infectious disease that can cause damage to the nervous system.5The Snellen chart consists of a series of individual letters that become smaller and smaller towards the base.66/12, for example, means that at six metres, the patient can see what a normal person can see at twelve metres.7Your left for their right and vice versa.8The bar of the 'H' is level with their eyes, while the uprights are at the limits of their vision to either side of their face.9Motion of the eyes from side to side while the patient is stationary.10Balance can be tested by getting the patient to stand with their eyes open and then with their eyes closed - be ready to catch them.11Take the tongue depressor out first, you sadist.12The small fleshy lump that hangs from the roof of the back of the mouth.