The Chimps' Tea Party Content from the guide to life, the universe and everything 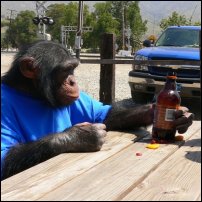 If you visit the zoo today, you'll see a lot of interesting and educational specimens. You'll maybe learn about biodiversity and sustainability, of captive breeding programmes and controlled re-introductions, and of how the actions of the human race have caused habitat destruction. Yet it wasn't always like this. For much of the 20th Century, zoos were places of entertainment. You could feed buns to the elephant and take a ride on his back. Best of all, you could pay your sixpence and be admitted to watch the Chimpanzees' Tea Party.

It doesn't take a lot of imagination. A table would be laid out for a formal tea, then the zookeepers, in their uniforms and peaked caps, would lead in the diners, dressed in their Sunday-best clothes. The chimpanzees would politely perch on their seats, then act out a scene involving pouring out drinks from teapots, sometimes into cups; then eating and drinking the fare that had been laid out for them. The keepers would scold them for any bad manners, but the meal would invariably descend into chaos, as food and drink was spilt and thrown, and diners left their seats and ran around the enclosure.

Children loved it. The chimps were acting out everything the kids weren't allowed to do at home. It was spontaneous, unscripted mayhem.

The spectacle was a regular fixture at London's Regents Park Zoo from the 1930s onwards. In 1935, a Pets' Corner was established, and this was launched as a Children's Zoo on 28 May, 1938. The opening ceremony was performed by John F and Edward Kennedy1, sons of the US ambassador to London.

It was the zoo's heyday and this was the hottest family ticket in town. Not only that, the zoo's authorities believed they could even learn about aspects of primate behaviour from the display:

It is of psychological interest that almost any young chimpanzee learns table manners in a few days, partly by imitation of his or her fellows and partly by seeming to try to understand what the keeper wishes done. There are individual differences in quickness, as Darwin pointed out in the 'Descent of Man'...
— The Times, 5 December, 1931

In 1956, the tea company Brooke Bond got in on the act and commissioned a TV commercial for its PG Tips brand featuring a chimps' tea party with a soundtrack overdubbed by actor Peter Sellers. It was a hit, and launched one of the longest and best-loved advertising campaigns in British history. Specially trained animals were dressed up and acted out short scenes. Secretary chimps in curly wigs would serve tea to company director chimps. Removal-man chimps would take a tea break while trying to lug a piano down a flight of stairs:

Young chimp: Dad, do you know the piano's on my foot?
Old chimp: You hum it, son; I'll play it.

Too Much Monkey Business

We must have been having too much fun at London Zoo. We didn't really notice that it wasn't politically correct to enjoy this sort of thing. Well, we knew bear pits were wrong, but London's had been closed shortly before the First World War. The elephant rides stopped in 1958, more through fears for children's safety than anything else. And feeding the animals was banned ten years later after an elephant overstretched itself to reach a bun and fell into a ditch. The chimps' tea parties lasted until 1972.

Not only that, but the cages were deemed too small, so animals were given more space in which they could act naturally. Not only could we no longer prod them with sticks through the bars, but there were fewer specimens on display. It wasn't surprising that the removal of entertainment from the menu, coupled with competition from other family attractions, led to a sharp drop in visitor numbers, leaving the zoo somewhat descending into crisis.

Sir, Having spent a disappointing day last week at London Zoo, we are not at all surprised that attendances are falling and the zoo's closure is planned. A distinct lack of animals, so many empty enclosures and cages, left us with the dismal feeling that we were in a ghost town. ...The fun of the zoo was missing. Signposts indicated animal rides which were deserted. The chimps' tea party has been replaced by a cow-milking demonstration. Educational? Yes. Entertaining? No. We were left with the impression that the zoo is run by a group of stuffy members of the establishment who adhere rigidly to their principles whilst ignoring current trends.
– Letter to The Times, 10 April, 1991

Zoos shorn of chimps' tea parties have learned to re-brand themselves with different attractions: rainforest experiences, hands-on exploratories and ecologically themed exhibits are all par for the course these days. If we want to see small, clothed primates making a mess and misbehaving themselves, then there's always the fast-food restaurant, particularly during half-term week.

1Although some sources say it was Robert and Edward Kennedy.