Neverwhere Content from the guide to life, the universe and everything 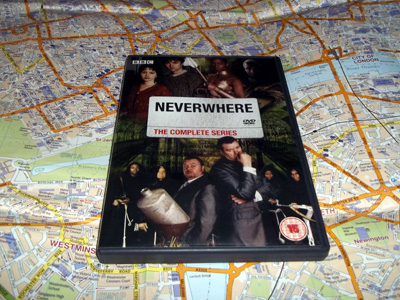 This six-part BBC television serial, first shown in 1996, tells the macabre and funny tale of the fall of an average man, Richard Mayhew, into the dark and sinister world of London Below. Written by Neil Gaiman1 the serial is based on an idea conceived by Gaiman and British comedian Lenny Henry. A book by the same name, also written by Gaiman, is a novelisation of the serial and was published in 1997. A movie is reportably in pre-production.

The TV production does the story justice by using real-life locations under London. An impressive set design helps bring this underworld to life. All this is complemented by the marvellous characters. Mr Croup and Mr Vandemar are funny and frightening in equal measure, Richard is constructively out of his depth, the marquis is enigmatic, charming and more than a little dodgy. Door is a person in pain trying to do something to solve it, and Hunter is true to her name. Islington is played with angelic qualities, Old Bailey, with his trade in city birds, is a striking figure.

A stunning title sequence, designed with images and music eases you into the world of London Below2. However, despite the series' well-produced nature, the press and even the BBC promotions department did not know exactly how to pitch it, so it ended up under-exposed, limited to a UK Radio Times review and some vague scenes on BBC2 promos.

In modern-day London, UK, the inhabitants live, work and laugh as they go about their everyday business. They don't notice the inhabitants of the other London. This 'other place' - London Below - consists of pieces of the modern city which have been left behind, huddling together beneath the acknowledged city. London Below is not a very convivial place, death stalks the underside in many forms.

Mr Croup and Mr Vandemar - Master craftsmen3 of pain and death, and, as stated previously, both amusing and frightening in equal measure. Mr Croup with his stunted figure and love of extravagant words and sentences complements Mr Vandemar who has a tall frame, talks little, walks like death4 and is constantly hungry - eating live rats or pigeons whenever they cross his path. They have killed through the centuries, by request or for pleasure. Destroying the city of Troy by fire and murdering the inhabitants of a monastery were among their exploits before accepting the commission in London Below for an unnamed principal.

Richard Mayhew - A businessman, he collects trolls, works in a securities firm and is a very nice young man. Everything changes when he meets Door and he is set on the adventure of his life.

The Lady Door - The only surviving member of the House of the Arch, her life remains in danger from Croup and Vandemar who murdered her family. She is on a quest to discover why.

The Angel Islington - A real angel, living at the heart of the Underground.

The Marquis de Carabas - A striking figure, well known in London Below, he is a bit dodgy, in the same way a rat is a bit covered in fur. He trades in favours as investments, if you owe him a favour, be sure he will call it in.

Hunter - The Lady Door's bodyguard, her passion in life is to hunt the Great Beast, a mythic creature that haunts her dreams and Richard's nightmares.

Old Bailey - This old fellow is happiest alone on the rooftops of the crumbling old buildings with his birds, but is drawn into the plot against Door by the Marquis.

Other Inhabitants of the Underside - Rat Speakers, Velvets, Black Friars. Almost all are dangerous in one way or another.

This map is an important part of the world of Neverwhere because not only is it the staging for Earl's Court, it is also the creative inspiration behind many of the names used. The look of the TV serial is enhanced by the use of disused London Underground railway stations. There are approximately 20 of these scattered around London. They include Down Street Station5, which inspired one of the mythical settings and part of which was used for Serpentine's (Serpentine of the Seven Sisters) Banquet which features real-life trains rushing past the dinner table.

Who Came Up With The Idea?

Our researcher has put this sequence of events together from what Neil Gaiman and Lenny Henry have reportably said.

Lenny Henry: Neil, I think, came up with the idea of the London Underground Map and started to talk about Black Friars and Angel Islington and Seven Sisters and Shepherd's Bush, and how the names where very evocative of another place, a parallel universe, if you like.

Almost as interesting as the story of the series' creation is where some of it was written:

Tori Amos6 gave me her house to write all the Blackfriars stuff in, while Steve Jones7 put me up from Earl's Court to the British Museum.
- Neil Gaimon

He says the reason that people kept dropping into water in one episode to the fact it was written in Tori Amos's house - which happens to be a bridge.

Book Lives Up To Expectations

The well-reviewed book, also entitled Neverwhere, lives up to the world created by the BBC production and expands on it ten-fold. It places the story and performances right in the heart of London Below and expands them, giving some scenes more depth and impact than they could achieve on the small screen.

Even though much of the style, performance and ambience are derived from the TV production in the acknowledgement section of the BBC produced book Neil Gaiman points to the performance of the actors in the serial:

My thanks to the actors, who embodied the words. I've stolen many of their performances for the book and I thank them all.

Also the staging and art direction:

I have shamelessly stolen from him [director Dewi Humphreys] and from art director and set designer James Dillon, all the way through the book. My thanks to both of them.

Ever since the TV serial release there has been talk of a film. Jim Henson Films (of Muppet fame) bought the film rights and stopped any repeat TV broadcasts after one showing in the USA. Neil Gaiman has tried to distance the story from the BBC/Crucial Films TV production because although good, it was restricted in the scenes it could do due to being produced on a smallish budget.

1The same Neil Gaiman responsible for the Sandman series of illustrated novels.2Also used as cover art on the BBC video releases.3Although described as not exactly men.4Death walks like Mr Vandemar.5Down Street Station was converted for use as a secret command centre during World War II. The last ten feet or so of the surviving platform was used for the banquet in the TV serial.6Named the sprite-goddess of alternative rock by magazine Vanity Fair.7Ex-Sex Pistols guitarist.