Tree Stump Extraction Content from the guide to life, the universe and everything 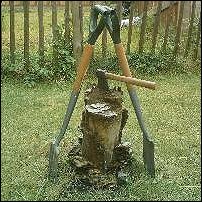 According to the American legend, when George Washington chopped down the cherry tree, he could not tell a lie and told his father immediately. History does not record what happened next, but if his father had any sense, little George's punishment would have involved extracting the stump from the earth.

Tree stump extraction is not unlike wisdom tooth extraction - stressful, potentially expensive, and can involve substantial blood loss. It can be a big job, and it is best to keep a clear head when attempting it. This Entry proposes a step-by-step approach, gradually escalating the amount of force or technology involved until either party - the stump or you - gives in.

Be aware that the root system of trees can vary a great deal from one species of tree to another. The type of soil and the age of, as well as the level of exposure to the wind, of the tree will all affect how tough its roots are. In addition, the amount of stump you have left will affect the techniques that you can use. A higher stump means better leverage, but rules out splitting and makes poisoning more difficult.

Step One - Sizing Up Your Stump

Before you start, take a calm, dispassionate look at the stump. How big is it? As a rough guide, a tree with a diameter of less than 10cm should generally yield to Step Two. 10-20cm will require the use of Step Three. A size of between 20 and 40cm will mean utilisation of steps Four or Five and above that, you might seriously want to look at using a stump treater, hiring a grinder or calling in a professional. Take the opportunity to assess whether Step Ten is any good to you - does the stump have to go? Once you've started mutilating it, you will probably find that you experience a deep psychological need to go to the end of the process, so now is the time to double-check whether you even need to start.

Step Two - the Spade as Lever

Tools required: One garden spade, or a fork if you prefer.

Take your spade and dig under the root ball of the tree, using your foot to pressure the spade in the ground at a diagonal angle. When the blade of the spade is fully buried, lean back on the handle. If you can hear the roots popping and the stump begins to move, this is a good sign. If you can hear the spade creaking and see the handle bending, this is a bad sign. It is surprisingly easy to break a spade with your own body weight. If at first you don't succeed, try from different directions and angles.

Then move to step Three.

Additional tools required: Secateurs or sharp knife. Bolt-cutters or small saw. A trowel, an axe, pickaxe and crowbar can be useful in some circumstances. Garden gloves would not be a bad idea, for safety reasons as well as not getting your hands dirty.

So, you've recognised that you are not going to break the roots with brute force. You need to expose and cut the main roots, which are anchoring the stump to the earth. In order to do that, you are going to have to dig a hole around the base of the tree. Think large with the hole; otherwise you're not going to be able get your cutting instrument of choice in. A radius of hole about three times larger than the diameter of the stump should do it. The depth you can judge as you go. If you want to get every last root out, then your hole will need to be much, much wider.

As you progress, your spade will regularly be stopped by a hard object. This is hopefully a root, which you can expose and then chop through. You may want to make two cuts and remove a length of root, so as to allow for more spade room. As you get underneath the stump, you will find that your spade can no longer reach the parts it needs to. Switch to a trowel or perhaps even bare hands to scoop the earth out from underneath.

Then move to Step Four or Five.

Step Four - Give It Some Hammer

Additional Tools Required: Either a sledgehammer and one or more wedges, or a large and heavy axe or a chainsaw and appropriate safety equipment.

If you can't go round the stump, you're going to have to go through it. Chopping the stump into sections makes it easier to remove bits of it, and facilitates access to the difficult under-stump area. Start by chopping down the middle of the stump, and then chop at right angles to this first cut. If using a wedge, don't hammer the wedge too far or you may not be able to get it out. If using a chainsaw, be very careful as this kind of work can be quite difficult and the consequences are painful.

Then move to Step Five.

Additional Tools Required: A solid rope. Several large friends and a pack of beer. Maybe some more crowbars. Possibly some equipment to set up a pulley system. A winch if you can get hold of one.

Hopefully by now, your stump is at least weakened. Maybe you can even get a rope part of the way underneath it. So now here comes the time to try brute force again. Anchor your rope solidly round the stump. Have your friends haul on the other end, using their legs not their backs. If you have spare friends, they can use crowbars as levers from the other side. For greater sophistication, set up a pulley system; just be aware that physics tells us that the forces exerted on the point to which the pulley is attached are as great as the forces exerted on the stump. If the stump is stronger than this fixed point, the fixed point will give way first. A winch would be more professional, but is not generally the sort of thing people have lying around in the shed.

Then move to Step Six.

Flooding the hole you have created with water may help to loosen the hold of the roots on the soil, therefore improving your chances at step five. However, be aware that this turns a dusty piece of work into a muddy, damp, slippery piece of work. If you have to get back into the hole to chop more roots, the working conditions are going to be like the Somme circa 1916 without the bullets. Your spouse may insist on hosing you down before you come back into the house at the end of the day.

Then move to Step Seven.

Additional Tools Required: A drill. Ideally, a specifically designed stump-treater. Battery acid, petrol, or similar flammable products are occasionally used by professionals, but neither are recommended as a DIY option for obvious safety reasons.

Put a fairly large diameter (10mm, for example) wood drill bit in your drill. Drill between half a dozen and a dozen (depending on size of stump) holes vertically into the stump, going down as far as possible.

Next you have the choice of chemical products. Without a doubt, the best option would be to use a specialist stump-treating product, available from your local garden centre. Note that some of these prevent further growth from the stump, rather than actually facilitating its removal. Others, such as 'Root Out' (Ammonium sulfamate) break the tissue of the stump down, making it easier, once a few weeks have passed, to hack the stump apart. Others still kill the stump from the roots. For all of them you will need to follow the instructions carefully, and be patient while the chemical does its stuff.

Quite common in the building trade is the use of battery acid. Pour into holes, wait six months and stump will apparently come out easily. Battery acid is very aggressive stuff - it may or may not damage your garden, and it will certainly damage your skin if you don't handle it carefully. Alternatively, it appears that is possible to set light to the stump. This involves putting barbecue lighting fluid or similar in the holes and then lighting them - the stump will burn for a long time, so do this in the morning. Have a bucket of water or sand ready in case things get out of hand. It would seem likely that this technique would work best with a stump that has had the chance to dry out a bit.

Then move to Step Eight, Nine or Ten.

If your stump is in an open space, you probably still have two options at the DIY stage. One is to hire a grinder - see below. The other is to use a 4x4 (a tractor would be even better if you know a friendly farmer) and some chains. Check that the chains are the right length and that the root ball is sufficiently weakened, flood the hole and...pull!

For really big trees, the professionals don't mess about. A mechanical digger and/or a bulldozer come into play. You just lean on the stump with it, maybe dig a bit and...problem solved. At the forestry scale of things, they sometimes take the tree and the roots at the same time by pushing quite high on the trunk. But can you get a digger in your back garden?

Alternatively, a specialist (not just a general builder) will probably bring in a grinder. This device turns the stump into wood chips, and is probably the way forward if you are willing to pay someone. In some countries, you may also be able to hire a grinder. If you do this, you will need safety goggles. Read the instructions carefully. If you live in a terrace, and the only access to your back garden is through your front door, you should be aware that even the smallest grinders are quite wide - check the measurements.

Only for large gardens or fields, experienced technicians, and desperate circumstances. Strap the requisite amount of explosive materials around the base of the stump, or more likely, place them into your drilled holes. Light fuse, and stand well back. An alternative which is equally unrecommended would be to treat the stump with sodium chlorate weedkiller, a powerful oxidiser. Wait a number of weeks and then light - the stump will go off like a firework.

Are you sure the stump is such a problem? Couldn't you make a feature of it - put a little garden gnome with an axe on top perhaps? Use your imagination, and learn to love and live with your stump or what is left of it. Alternatively, if the tree is being cut with a chainsaw, a professional will be able to make a last cut flat to the floor, leaving you with the equivalent of a wooden drain cover, not a big hassle.

1Neither of the techniques in this section are seriously recommended for amateur use. If you have gone past Step Seven without success you need to move to Step Ten or pay someone to sort your stump for you.