Blencathra Content from the guide to life, the universe and everything 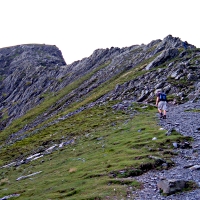 On stern Blencathra's perilous height
The winds are tyrannous and strong;
And flashing forth unsteady light
From stern Blencathra's skiey height,
As loud the torrents throng!
- from 'A Thought Suggested by a View of Saddleback in Cumberland' by Samuel Taylor Coleridge

Situated at the northern end of the Lake District National Park above the road between Keswick and Penrith, Blencathra forms an imposing 868-metre-high1 barrier with around a dozen routes of ascent. An old favourite of fell-lover Alfred Wainwright, the fell is said to take its name from the old Cumbrian for 'Devil's Peak', having apparently been home to Afallach, Celtic god of the underworld2. Three gills and a beck3 divide the broad southeastern slope into five finger-like fells, namely Blease Fell, Gategill Fell, Hall's Fell, Doddick Fell and Scales Fell. While the northwestern side is nothing special, the summit of Blencathra sweeps down and up again to reach Foule Crag to the north. Despite the many features of the mountain, including the infamously narrow Sharp Edge, it is this mild undulation of the summit, clearly visible from the east, that provides it with its alternative name: Saddleback.

Routes to the Top

Part of the appeal of Blencathra is the sheer number of different ways of approaching the summit. While we'd love to describe every route to the top in glorious detail, we don't quite have the nerve to do so and will refer readers to Book Five of Wainwright's Pictorial Guide to the Lakeland Fells. Please note the advice given at the end of this Entry when planning any walk.

The two main starting points for walks are Threlkeld and Scales, though Mugrisdale offers an interesting alternative. Having been bypassed, the village of Threlkeld appears as a set of roads heading uphill off the main road (A66) about three miles from Keswick. The car park at the top of the village should be easy enough to find, with the path towards Blencathra heading off from here. Scales, on the other hand, is a small farm served by a slip road off the A66, and hikers are better off parking a short way west of the farm so as to be closer to the footpath.

A long path connecting the various routes to the top runs roughly along the contour at the base of the fell, passing very close to Scales and close enough to Threlkeld. This path can be used to create any number of circular walks, climbing up along one finger of Blencathra and then down another. Going from west to east, the routes from the Threlkeld-Scales path up to the top are:

Then there's Mungrisdale, which offers the longest route of all. The straight line towards Blencathra is blocked by Bannerdale Crags, forcing hikers to either walk most of the way to Bowscale Fell and then hike cross-country towards Foule Crag, or to follow the River Glenderamackin round past Scales Fell to reach the area around Scales Tarn.

One point worth making is that the initial view on most of the ascents is spoiled by the noisy main road beneath, which Wainwright had criticised long before it reached its current incarnation. However, another highway through the valley below is worth noting on the way up – the dismantled railway to Keswick can clearly be seen, with its abandoned viaduct sitting isolated in a dip between fields across the valley from Scales.

At the summit, the views are spectacular provided the weather is behaving. To the north, one can see the saddle dipping towards Foule Crag, with the rolling hills providing a backdrop to the gentle slopes to the northwest. The routes via Blease Fell and various others are to the west, with Skiddaw House visible in the valley below and Skiddaw itself acting as the backdrop in this direction. Looking to the southwest one can see the ridge of Gategill Fell, behind which in the distance is Derwent Water. Helvellyn and its range are visible to the south, with the route down over Hall's Fell heading off south-southeast from the summit. To the east one can see the bodies of Doddick and Scales Fells, beyond which is the exit from the Lake District along the A66 to Penrith. On a good day, you can see the Pennines in the distance.

There are two ridge walks available from Blencathra. One consists of a dull walk down over Scales Fell and then up along the narrow end of Souther Fell. The other is slightly better, consisting of a descent over Foule Crag and around the hause at the top of the River Glenderamackin, following which it is possible to approach the top of Bannerdale Crags via its long, non-craggy side.

Running off Foule Crag around the northern edge of Scales Tarn, Sharp Edge is second only to Helvellyn's Striding Edge in terms of Lakeland fame. With severe drops on both sides and some rather exposed points, the ridge is wholly unsuitable for those wearing trainers and flip-flops5, and should generally be avoided in any sort of inclement weather whatsoever. You have been warned.

The lower end of Sharp Edge is most easily accessed by first walking up to Scales Tarn from Scales – the path runs up around Scales Fell and then traverses the hillside above the River Glenderamackin. Note that Scales Tarn is not at the end of the valley, but hidden up to the left along an obvious path6. From the tarn, walkers are afforded a choice between an easier route to their left and the imposing Sharp Edge, by now clearly visible on the right. There is a short grassy slog uphill before reaching the start of the ridge, though there is no other satisfactory way to the top from there without first returning to Scales Tarn.

The ridge is relatively easy at first, with the more well-trodden path leading walkers round to the north side (the right hand side when walking up the ridge). However, those shy of mounting the ridge will find themselves running out of room as the ridge demands a somewhat holistic view of its surroundings. At first the top of the ridge is shielded by large rock formations on the left hand side, but the walker will soon reach an exposed point where a flat table of rock offers room for one person to sit and rest. A rather narrow section of ridge must then be traversed, following which the walker is free to attempt the long scramble up the rock towards the grassy top of the ridge. As Wainwright puts it, this ridge will put all other troubles on hold, even a raging toothache.

Blencathra was once used as a source of various minerals. The largest mining works are on the western side of Hall's Fell in the Gate Gill valley, with the disused lead mine near Threlkeld being one of several levels driven up to a mile deep into a seam that yielded lead and zinc. Disused since the 1920s, the levels can still be seen when following the valley up to Middle Tongue, and are worth a look from a safe distance. There are also a couple of old mines in the Glenderaterra valley next to Blease Fell, with lead and copper being mined from two smaller seams until the 1920s, and a few unsuccessful workings that produced limonite were driven during the 1890s near Scales Tarn and in Mousthwaite Comb east of Scales Fell.

Fellwalking can be a serious undertaking, especially if the mountain you're climbing is anywhere near as big as Blencathra. Walkers should always wear proper hiking boots and bring warm clothing7 and waterproofs regardless of the weather. A good supply of food and water (think 1.5 to 2 litres of fluid and a healthy packed lunch for each person, plus emergency chocolate rations) is essential, as is a map. This Entry is designed to act as a rough guide only - what you really need is a 1:25,000 OS map8, a compass, and Book Five of Wainwright's Pictorial Guide to the Lakeland Fells. This Entry doesn't pretend to give advice on the safety of any of the routes in mist, but instead reminds walkers to be cautious and use their best judgement instead of pushing on regardless. Note particularly that the old lead and copper mines around Blencathra should be admired only from a distance, as they are inherently unsafe and their entrances may well lead to vertical shafts. Oh, and watch where you're putting your feet - it always helps.

1From sea level, that is, and equivalent to 2,847 feet.2It is also possible that the name comes from blaen cathrach, meaning 'bare hill shaped like chair'.3Four streams, to those who aren't familiar with Lake District speak.4Formerly the 'Blencathra Sanatorium', this building has since been taken over by the National Park Authority for accommodation and teaching purposes.5You know who you are.6The junction is at grid reference 333282.7Including proper walking trousers - jeans have a habit of soaking up the icy-cold rain.8Sheet OL5 covers most of Blencathra, with OL4 making up the rest.