Drystone Walls Content from the guide to life, the universe and everything 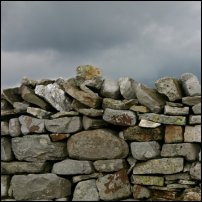 Drystone walling should be self-explanatory because it does involve walls. Which are made of stone. But the 'dry' bit needs a little more by way of explanation...

Most drystone walls are built in places that are traditionally... well, wet. Places like Yorkshire, the Lake District, Scotland and Wales - these are all places where you're most likely to find drystone walls. It seems odd then, that these places are among the rainiest in Britain. And yet they have 'dry' stone walls weaving all over them.

'Wet' stone walls are built with mortar. Therefore they are best built in places that are dry in order that the cement can set. Drystone walls, however, are built without using mortar. Instead, they are made up of stones skillfully placed one on top of the other with no binding agent to hold them together1.

Containing sheep in specific fields is the main reason for the existence of drystone walls. Also, they are a thing of beauty, they last much longer than 'wet' walls, and they're safer than fences when it comes to herding in wildlife. Besides, what else is there to do with all those stones cluttering up the countryside?

And yes, there's some people that actually like standing in wet fields moving stone around. At least with drystone wall making you get a chance to mark out your territory - or rather, the sheep's territory - which will be visible for at least a few centuries. Which probably can't be said for stuff that gets done in the average office.

1 The stones used in constructing drystone walls are found in wet areas therefore they're often caked in mud. But this mud isn't essential to the building process. Technically speaking the wall remains 'dry'.