Shri Swaminarayan Mandir and Haveli, Neasden, London, UK Content from the guide to life, the universe and everything 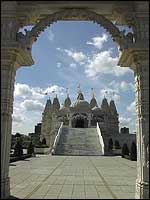 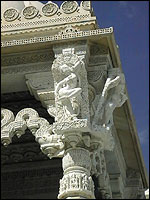 Once you have the above, ship all the materials to willing devotees in India, where they are lovingly carved, labelled, packaged and resent to the UK. Upon arrival the pieces are unpacked and assembled to produce, at the time of writing, the largest Hindu temple outside India - the Shri Swaminarayan Mandir and Haveli2.

The Shri Swaminarayan Mandir and Haveli is in Neasden, north-west London - an area which is most famous for its roundabout and large Ikea home furnishings store than anything else. To get to the temple, you need to take the North Circular, which is one of London's orbital roads, towards the Hanger Lane Gyratory System. When you pass the aforementioned Ikea store (on your right), you will come up to a petrol station. Take a left here and continue down this road. Within a minute you'll see the mandir rising handsome and proud above suburbia. Follow the signs for the car park.

Before you get in the gates, it's worth knowing that apart from the usual no smoking/drinking/eating bans, there is also a prohibition on chewing gum in the mandir grounds. You will find a bin attached to the wall to get rid of any gum or cigarettes. 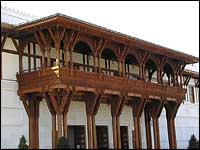 As you look at the building, you will see the mandir on the left, with 30 marble steps leading up to the entrance. This is not where you enter. If you look to your right you will see the haveli entrance which has been carved out of farmed Burmese teak. Before you can get past the main foyer, you have to remove your shoes - the men's racks are on the left as you enter and the women's are on the right. The reason for removing your shoes is that you are leaving behind all earthly and worldly activities before coming to prayer. After you've removed your shoes, you have to deposit any bags and cameras. The cloakroom is on the right as you walk in. Photography inside the temple is forbidden and if you are caught, your film will be confiscated.

You are now ready to explore the haveli and mandir. As you enter the haveli, you will see a desk where you can pick up any number of leaflets. There will also be somebody there who can answer any questions you may have. If they don't know the answer to your question, they will find someone who does. Behind the desk is a shop which sells all the paraphernalia that goes with Hinduism - incense sticks, beads, bangles and spiritual books. It's best to do your shopping after your tour.

The haveli is dominated by the prayer hall. Visitors are allowed in to the doorway but aren't allowed to wander throughout the great space. To add to the truly international flavour of the temple, the prayer mats were made in Dublin, Ireland. The hall can seat 4 - 5,000 people. Women sit on the left and men sit on the right - the reason for this is that the images of the gurus and monks (on the right hand side of the hall) should not cast their eyes over female forms.

Turning away from the prayer hall, you will see a corridor on your right. Take this as it leads to the mandir. As you walk up the ramp and get to the mandir you will see signs asking you to be silent. Adhere to this golden rule as any infringement of it will be pounced upon. On your right you will see a museum of Hinduism - this is a fascinating showcase but is really only recommended for theologians or those with a keen interest in Hinduism. Head up the stairs and enter the temple - quietly, very quietly...

The temple is actually surprisingly small with ornately carved pillars depicting the Hindu gods and their offspring. If you make a note of the name and ask the guy at the desk in the foyer, he will tell you all about the deity in question. Take a wander around and look at the intricacies of the work, the details on the columns and the garish figures of Ganesh and his peers. These almost human-sized figurines are lavishly and gaudily dressed in the finest silk and materials.

You may smell the aroma of delicately spiced food waft around the temple and see a man pushing a food trolley. This isn't the Hindu equivalent of duty free but is in fact food for the gods. The man will drop the food in the gods' alcove and lock the door so the deity can eat in peace. It is best to phone the temple regarding meal times.

This is the tour of the temple over. When you've done your shopping, collected your bag, put your shoes on and have decided to head home, you may feel a little peckish. Never fear, as in the car park there is a Hindu food store and canteen selling and serving fresh produce from around the world. If you don't know how to use a particular herb, spice or vegetable, just ask as the staff who are always friendly and willing to share a recipe.