Monaco - A Grand Day Out Content from the guide to life, the universe and everything 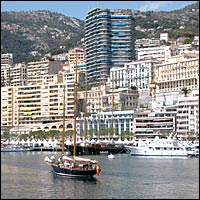 Monaco. Playground of the rich and famous. A Grand Day Out.

If you ever decide to visit, it's best to first ensure that you have a wallet or purse stuffed full of money, and a healthy credit card balance. If however, you are skint, tight, or both, you will want to get the most from your visit without spending too much. Here are some pointers.

You will want to dress smartly. Monaco is full of rich people who dress well. Of Monaco's 32,000 residents, many are celebrities and achievers from the world of stage, film, music, business and sport. Once you arrive, it will be too late to pop back home and change into something more suitable.

Even though you are visiting on a shoestring budget, still do take as much money as you can manage. Things really are quite expensive in this one-square-mile income-tax-free principality.

Monaco is on the Côte d'Azur, 10 miles from Nice in France and 22 miles from San Remo in Italy. A cheap - but not particularly stylish - way to get to Monaco is by bus1. You can bus in from Nice or Cannes in France and from Menton in Italy. Don't expect to be in Monaco before 9am though, and be prepared to leave before 9pm.

Driving is another option, but you will have to park, which won't be cheap, and will be nigh on impossible unless you have a parking space in one of the ridiculously costly (but extraordinarily luxurious) hotels. If hitchhiking is your preference, then Highway A8 is the road for you. The A8 autoroute starts in Provence and runs across the south of France, services Monaco (via exit RN7), then becomes the A10 autostrada as it runs into Italy across to Genova.

There are also train routes into Monaco from the South of France and Italy, with trains running from around 8am until midnight2. You will have to buy a ticket of course. Having said that, if you plan to use one of the very-late-night or early-morning trains coming in through Nice for example, you may well find that your departure station is so empty and void of staff that purchasing a ticket will be almost impossible3.

Of course, you won't be flying in - this may have more prestige than the bus, car or train, but is vastly more expensive. The helicopter link alone costs more than you might want to lose in the casino later. And as for chartering a yacht worthy of docking at Monaco's port - lets just say that if you have to ask how much, then you can't afford it.

First things first. Find somewhere to sit down and have a drink. There are numerous bars in Monaco, and none of them are going to be cheap. So, if you're going to drink overpriced alcohol before lunchtime, drink it in style. Find a bar that overlooks the yachts in the harbour. Monaco is set on just over two miles of south-east facing coastline on the edge of the Mediterranean Sea. So if you are sipping a mid-morning beer or wine on a terrace looking out over the Port de Monaco, the sun will be looking back at you.

Once you've had a nice cool drink or two, it'll be time for some milling about.

Probably the only thing Monaco has more of than bars and restaurants is shops. So, go shopping. Try not to buy anything - that would be costly. Having said that, maybe try the gift shops for some reasonably priced souvenirs. Other than that, your best bet is to stick to window-shopping.

For such a small country (only the Vatican is smaller), Monaco has a surprising number of churches, museums and gardens. You will have to pay to get into many of these (even the gardens), but take a wander anyway. There are a lot of sights to be seen without parting with a single Euro.

Take the opportunity to go down to the harbour and ogle at the yachts. Have your companions photograph you standing surreptitiously beside the nicest boat, looking like you are about to board for a lunch appointment.

If you are a Formula 1 fan (and even if you're not), you may find walking round the F1 grand prix track an interesting activity. This is more difficult than it might sound - but that's half the fun. The circuit is almost three miles long, and many of the F1 landmarks look different for the other 51 weeks of the year. For example, rather than a chicane on the run from the Tunnel down to La Piscine, there is instead a mini-roundabout and some well-placed concrete plant troughs. And although you may recognise the famous Loews hairpin, the hotel looking over it is no longer called Loews.

No Monaco jaunt would be complete without a visit to the casino. The casino has two parts: the real casino is at the back. The easiest way to get in there is to be rich, be famous, or have an invitation from Monaco royalty. However, if you dressed up smart enough, and are in the mood for some smooth talk, (and you have your passport to hand) then you might just blag your way in. Failing that, the front part of the casino is for the plebs and has numerous slot machines on which you can spend your limited cash supply in the hope of winning some back.

By now, evening will be turning to night. If you're lucky, you might well find a beach party being hosted on...well, on the beach. Once again, your sophisticated attire and a bit of smooth-talking should see this party well and truly gatecrashed. Upon entry, loiter by the bar and do your best at looking enthusiastic but not quite as loaded as everyone else. After a while, the barman should take pity on you and will start plying you and your companions with free drinks.

For a real stroke of genius, wear your swimming costume under your gladrags. That way, when you've rocked till you're about to drop, you can change out of your clothes and use the showers on the beach. Even in the cool night air, you'll be dry in no time, ready to change back into your stylish wardrobe.

After a hard day and night sightseeing and partying, you may well be in need of a kip. First, find yourself a quiet spot on the beach. Fortunately, the sand is quite coarse, so with a bit of manipulation you can fashion yourself a sand pillow. This won't be the most comfortable night's sleep you've ever had, but it's free and it's Monaco. The chances are it won't last long either, as the local law enforcement officers will be eager to move you along (or indeed move you out of the principality altogether) once you are detected.

Now, then, is probably the best time to be on your way. Remember that the trains can work out to be surprisingly cheap in the early hours of the morning. You can catch up on the rest of your sleep in the comfort of a railway carriage seat, whilst your unconscious mind races through the memories of the last 24 hours that have been a Grand Day Out in Monaco.