Leamington Spa, Warwickshire, UK Content from the guide to life, the universe and everything 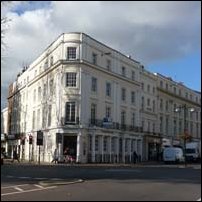 Leamington Spa is a Regency town in Warwickshire, close to Warwick, Coventry and Stratford Upon Avon.

Leamington Spa owes its growth, prosperity and even part of its name to the discovery of its saline spa waters. Locals were familiar with the water and had used it for years to make bread and treat illnesses.

The earliest record of a saltwater spring in Leamington Spa, which was then no more than a hamlet, is from 1420. Another spring was discovered in 1784 by two local men, William Abbott and Benjamin Satchwell on Abbot's land. They built a well on the site and a small bathhouse which opened in 1786. A well was built over the original spring, on the Earl of Aylesfod's land, in 1804 and others followed at a number of other saline springs discovered in the area.

Drinking1 and bathing in such water was thought to have enormous benefits for the health2 and as result, those who could afford it flocked to Leamington Spa and other spa towns such as Cheltenham and Bath. These towns were fashionable destinations for the well-to-do and while the popularity of the spa waters continued, Leamington Spa grew rapidly. Visitors in the town's heyday including such royal and political figures as the Duke of Wellington, Queen Adelaide and the future Napoleon III, writers Nathaniel Hawthorne, John Ruskin and the composer Paganini. Charles Dickens, who visited many times, even set a scene of his novel Dombey and Son in the town - which is, admittedly, not exactly his most famous work.

However, by the 1840s and 1850s reduction in interest in the spa waters and the expansion of the railway network, taking families to holiday in seaside resorts, contributed to the decline of the town. That said, it is still a very attractive place to visit.

Leamington Spa can be found in the Domesday Book as 'Lamintone', which means 'farm on the River Leam'. Later, the town was known as Leamington Priors as it was on land belonging to Kenilworth Priory. The name changed again with the popularity of the spa waters. It's obvious enough where the 'Spa' part of the name comes from, but the town is also known as 'Royal Leamington Spa'. This is due to several royal visits. Queen Victoria stayed here when she was eleven and the town had also been visited by the Prince Regent. As a result, in 1838 the town authorities requested permission to rename the town 'Royal Leamington Spa'. Permission was granted. However, the 'Royal' is now often dropped from the name.

A Walk Through Leamington Spa

The central shopping street in Leamington Spa is called the Parade. Built in 1808, most of the town's places of interest are located on or near this street making it well worth a stroll if you're visiting. Many of the buildings were constructed in the attractive Regency style.

Start walking at the bottom end, which for the purposes of this entry is the end nearest the train station. The station itself, incidentally, is a nice place to arrive in the town. It's Art Deco in style and there are plenty of quaint, old-fashioned adverts for rail travel to various locations, with lots of bright colours.

Our gentle stroll begins at the really rather large All Saints church. As can well be guessed by looking at it, this Gothic Revival-style church is one of the biggest parish churches in the UK. Continue towards the bridge over the River Leam. On your left at the end of the bridge you will see a small water fountain of genuine spa water.

Next is the Royal Pump Room and Baths. This is the bathhouse from the town's spa heyday. It was built in 1814 and is well worth a look. Inside, you will find a small café, tourist information centre, library, art gallery and museum. The art gallery is not particularly interesting but the museum, beginning in a lovely Turkish bath room, is an involving look at the history of the town with a focus on the influence of the town's role as a spa along with a number of exhibits on the subject such as an old stone bath and health products. Outside are the Pump Room Gardens. Don't be misled by the term 'garden' which suggests flowerbeds and the like. It is really just a small park alongside the river with a bandstand.

Actual gardens can be found on the other side of the road. Jephson and Mill Gardens are separated from each other by the river. Mill Gardens is notable only for a children's play area and a centre renting out boats and kayaks3 for use on the river. Jephson Gardens, named after Dr Henry Jephson, is lovely. He was a popular physician who promoted the virtues of the spa water. The land was owned by the Reverend Edward Willes, who in 1843 gave it to the town for a nominal rent for use as a garden. It was dedicated to Dr Jephson in 1846. It has ponds with fountains, well-maintained flowerbeds, a restaurant, café4, clock tower and even a sub-tropical greenhouse which is worth a quick look. There is also a temple-style memorial to Dr Jephson, containing his statue, and an obelisk in memory of Rev. Willes.

Returning to where you entered the gardens, continue further up the road to the mini-roundabout. Here, be sure to notice the triangular shape of the white building on the left of the edge of the roundabout. It is somewhat reminiscent – in shape only – of the Flatiron Building in New York. Opposite this on your right is a large, attractive red brick building. This is the Town Hall. Outside is a statue of Queen Victoria. A plaque proclaims that a German bomb in World War Two caused the statue to move an inch on its plinth, which can be seen if you look at it while facing towards the building. Fortunately, it appears to have escaped real damage.

Only a few metres further, on the right, is one end of a small stretch of street leading off the Parade called Regent Court. The shops here are higher-end, expensive shops and mostly independent shops.

If these don't tempt you, continue on the Parade. Eventually, also on your right, you will see an entrance to the Royal Priors shopping centre. This contains a number of high street shops all in an enclosed shopping mall connected to the rest of the town's shopping streets.

At the end of the Parade is another small park, including tennis and basketball courts. You may also want to take a wander down some of the side streets off the Parade.

Leamington Spa is a popular place to live for students from the nearby University of Warwick, which means students waiting at bus stops in fancy dress are not an uncommon site in the evenings.

The town also claims to be the home of lawn tennis. Real tennis already existed and there was a club in the town of which a Major Harry Gem was a member. He developed lawn tennis in 1872 and played it outside the Manor House Hotel. He founded the world's first lawn tennis club that same year, in Leamington Spa. The hotel still stands, but as is often the way of such things, the lawns now hold an apartment block rather than the classical lines of a tennis court.

1Which would be rather unpleasant.2Such as for the treatment of stiff joints, gout and rheumatism.3Though it closes in the winter.4Known as 'The Aviary' because in the 1960s, between its initial and current periods as a tearoom, it was used to house birds.