Making a Chemical Garden Content from the guide to life, the universe and everything 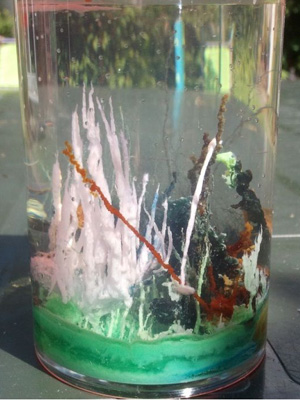 Most children with access to a chemistry set will have created a chemical crystal garden1.

Chemical gardens are the plant-like structures formed by dropping a seed crystal of a soluble metal salt into an aqueous solution of one of several anions2 such as aluminates, borates, carbonates, chromates, cyanoferrates, phosphates, or silicates. The most commonly-used (and studied) anion, however, is silicate, present in sodium silicate (water glass3) and hence the alternative names of silica or silicate gardens.

As the name indicates, the chemical 'horticulturalist' will observe a growth of fronds, similar in form to plants, taking place over a period of minutes to hours. This was of interest to 19th Century scientists who were interested in the origin of life.

These materials should be readily available from a good chemist, although they might have to be ordered.

Several of the chemicals involved, especially the chromium (III) chloride and nickel (II) sulphate, are skin irritants, and can cause contact dermatitis. Furthermore, iron (III) chloride is corrosive and stains the skin and many transition metal salts are toxic. Hence, the crystals should not be directly handled; use the tweezers!

So, What is Going On? 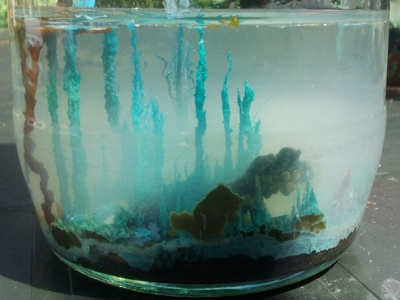 Certain metal salts, especially those of the transition metals, form precipitates when placed in the sodium silicate solution. As the metal salt dissolves, the resulting solution is less dense than the surrounding silicate solution and so rises up through the solution. As it reacts with the silicate anion, 'stalagmites' (like those found in caves) form from the bottom of the jar upwards - these are insoluble metal ion silicates. The surfaces of these insoluble silicates behave as a semipermeable colloidal membrane6, across which osmosis can occur.

So-called metallic trees were first observed by people such as the German chemist, Johann Rudolf Glauber (1604 – 1668) and first studied by another German chemist, Isidor Traube in the mid-19th Century. Traube showed that membranes could be produced artificially, which were permeable to water but not for certain dissolved substances. In this respect they were similar to those membranes surrounding plant and animal cells.

Among the semipermeable membranes prepared by Traube was one of copper (II) hexacyanoferrate (II), and such a membrane, formed in the walls of a porous pot, was used by the German botanist, Wilhelm Pfeffer, in 1877, for the quantitative measurement of osmotic pressure. These results showed that the osmotic pressure is proportional to the concentration of the solution, and also that it increases with rise of temperature. This research culminated in van't Hoff's law of osmotic pressure, formulated in 1887, in which he was able to apply the second law of thermodynamics. This pointed the way to a method for determining the relative molecular masses of substances in solution.

Indeed, osmotic pressure (for very dilute solutions) was found to obey the Ideal Gas Law, and

Despite all this knowledge, the physical chemistry of the formation of chemical gardens is still imperfectly understood.

In 1984 Independent Television News (UK) organised a competition for all schools in Great Britain to suggest an experiment to be performed in space, aboard the Space Shuttle. This was won by a school from Kent, Ashford School, who suggested a chemical garden.

The students wished to find out what shape and direction the 'plants' in a chemical garden would grow under conditions of microgravity. They wrote a computer program to simulate what might happen to the garden in space and it predicted a range of possibilities from near-spherical shapes to a spherical bundle of long arms.

The shuttle Endeavour launched on 12 September, 1992 and the chemical garden experiment worked very successfully. The growths were in random directions and tended to be twisted. To the surprise of the students there were also a few perfect spiral forms. At the time of reporting they had no satisfactory theory of the origins of these spirals.

Crystal-growing under conditions of microgravity has a wider and deeper significance for the life sciences, where a major goal is to understand structure/function relationships of biological systems at the atomic level. For example, many important biological molecules such as proteins (which include enzymes) have yet to be adequately structurally analysed. Microgravity may provide an environment where perfect protein crystals could be produced, that are large and pure enough for more precise analysis, such as X-Ray Crystallography. This would have important applications in, for example, cancer research.

With grateful thanks to P & R Labpaks for permission to use their images of chemical gardens.
1Chemical gardens are also referred to as crystals gardens, silica or silicate gardens or chemical crystal gardens.2Negatively-charged ions ie, negatively-charged atoms or groups of atoms (eg, chloride ion, Cl- in sodium chloride or the sulphate ion, SO42- in copper sulphate).3Water glass was used in the UK to preserve eggs during World War II. The eggs were soaked in water glass. The porous calcium carbonate of the eggshell reacted with the silicate to produce insoluble calcium silicate, which blocked the pores thus rendering the egg impermeable to air.4This is the IUPAC recommended nomenclature, where Roman numerals are used to denote the oxidation number of the metal ion. Hence this compound is 'chromium three chloride, hexahydrate'.5For the best results reasonably large crystals (up to pea-size) of each metal salt should be used.6A membrane that allows the solvent (water) to pass but not the solute (such as dissolved sugar or large metal ions).