Not The Nine O'Clock News Content from the guide to life, the universe and everything 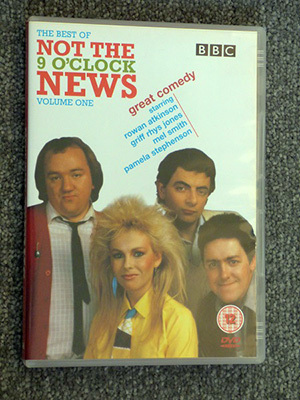 First broadcast in 1979, Not The Nine O'Clock News was the first satirical comedy show on British television since the legendary That Was The Week That Was in the mid-1960s.

Transmitted at 9pm on BBC2 - directly opposite the 9 o'clock news on BBC1, hence the title - the show took news film clips, edited them together and used them out of context to poke fun at the royal family and political figures of the day, particularly Margaret Thatcher and Ronald Reagan. This idea broke new ground in television and paved the way for shows such as the puppet satire Spitting Image in the 1980s, while the show's anarchic approach was television's first taste of the alternative comedy scene which would take off in the early 1980s with The Young Ones and The Comic Strip.

Among the show's most memorable sketches are:

The show ran until 1982, during which time the cast also hit the UK album chart three times with recordings of songs and sketches from the series: Not The Nine O'Clock News, Hedgehog Sandwich and The Memory Kinda Lingers.

In the mid-1990s, the BBC had the show re-edited in an attempt to make it 'faster and funnier than ever'. These new versions are still regularly repeated, but much of the topical material has dated quite badly, and jokes about Jimmy Carter and Michael Foot are almost certainly lost on today's target audience.

Where are They Now?

Rowan Atkinson went on to star in the hugely successful Blackadder series, and created Mr Bean in several TV specials and two full-length movies (the first directed by Mel Smith).

Chris Langham is still a comic actor and has recently been seen in the sitcom Kiss Me Kate and the spoof documentary series People Like Us.

1Not real hedgehogs, of course.