Ice Cream Floats Content from the guide to life, the universe and everything 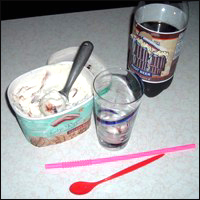 An ice cream float1 is a dessert made by pouring a drink over one or more scoops of ice cream. The ice cream, being less dense than the beverage2, will float in the beverage, thus giving the dessert its name. In theory, it is possible to make floats of any combination of ice creams and cold beverages.

It is useful to note that some beverages are decidedly less suited for the task than others. Milk, for example, is great for absorbing the flavours of anything put into it, and ice creams are no exception. Milk and ice cream are all the ingredients you need for a milkshake, after all! However, milk tends to do this at the expense of the ice cream's flavour (the ice cream loses more than the milk gains) and therefore at the expense of the overall taste of the float. Furthermore, milk tends to be somewhat more dense than the typical beverage, due to the milkfat it contains. Therefore, it is probably not a good float beverage. Soft drinks are far and away the most common beverage for floats, and an inventive person can create some very interesting and flavourful floats. It's conceivable that alcoholic beverages could be used in this fashion as well, for those who want to get a brain freeze while they get drunk.

In addition to the beverage considerations, you must also consider what ice cream to use. There is no hard and fast rule preventing you from using any type of ice cream, frozen yoghurt or even sorbet if you like. However, the flavour interaction with the beverage is an important consideration. In fact, the flavour interaction is important when choosing the beverage, as well. The best bet is to go with tried and true flavour combinations when starting out, and then experimenting when you get the hang of float making3.

It is important to start with a glass large enough to hold the ice cream and the amount of drink you wish to use. A good ice cream scoop would also be useful, though it's far from necessary. You can start by putting a scoop of ice cream in, or you can pour some of the beverage in first. It is important to note that pouring a drink over ice cream will generate a lot of foam, particularly if the beverage is carbonated (for instance, a soda). Bear that in mind when making your float.

Once the two main ingredients are in place, you can consider topping options, as well as any flavouring agents you wish to add. Syrups, for example, are extremely useful for this because, once dissolved in the float, they allow for extra flavour options without messing with the consistency of the overall float4. Things that can be used as toppers include fruits (like cherries), bits of fruits, nuts, whipped cream or anything else you think you would like on top of or in the float.

To assist in the float-making process, a few float recipes are listed here. Mix them as noted above — any differences are mentioned after the ingredients.

After the foam (if any) has settled, put the cherry on top of the ice cream.

Make the float as normal, then grate lemon peel on top.

1Often referred to simply as a 'float' or 'spider', depending on where you live.2Due to the air mixed into it during the ice cream-making process.3Which really isn't all that difficult, is it?4Of course, this assumes that you don't put too much syrup in the float.5A soft drink made from one of the most bizarre combinations of ingredients ever: sarsparilla root, nutmeg and anise, just to name a few. In the United States it's considered the quintessential float beverage.