'When The Balloon Goes Up' Content from the guide to life, the universe and everything 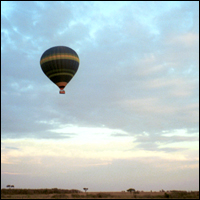 Will you be ready 'when the balloon goes up'? Will you know what you should do next? Have you fortified your home, stockpiled provisions, and made plans to protect your nearest and dearest? Are you trained in armed combat? Before you rush to the shed, grab a shovel and start digging yourself in, we should first make it clear what kind of balloon you need to be looking out for. This may only be an idiomatic phrase, but you may well be among those who cling to the idea that the outbreak of World War III is but a command away.

Balloons of all Shapes and Sizes

The first thing we called a 'balloon' or 'balloon ball' was an inflated leather ball used in the 16th Century. Well-to-do Europeans played a game which involved striking it to and fro with their arm, which they later protected with a wooden 'bracer'. The game lives on today, having evolved into the sport of volleyball. Now, there's no particular need to keep a watch on this type of balloon going up, but the author recommends watching beach volleyball - just to keep in practice, of course.

Then we have those latex toy balloons. Some of these tend to rise because they're filled with helium gas, making them lighter than air. You'll see these going up when a child discovers one of life's most important lessons - cause and effect. If you let go of the string (cause) you never get the balloon back again (effect). Parents of young children also learn that if they don't securely tie the string to the buggy (cause), their eardrums will suffer grievous and prolonged assault (effect).

Balloons don't always need helium gas to rise: hot air will do the same job. This principle led the Montgolfier brothers to build the first flying machine out of linen1 in 1783. For many years balloon races were a common sight in the countryside, and intrepid balloonists have competed to set distance and altitude records ever since. In July, 2002, Steve Fossett even flew solo non-stop around the world in one.

But these aren't quite the kind of balloons going up that we need to watch for; we're talking military balloons. These first appeared towards the end of the 18th Century, when the French - pioneers of the technology - used manned balloons to observe the enemy. A 'balloon corps' was also deployed for observation duties by the Union Army in the American Civil War. These balloons were tethered, or 'captive', to stop the unsteerable craft embarrassingly drifting off into enemy territory.

However, the balloons which should strike the fear of God into us are the unmanned captive sort. Today, these are used by the military for radar and optical surveillance in situations where aircraft cannot fly or as a more cost-effective alternative to manned surveillance. An earlier example of military use is the barrage balloon, sometimes called a blimp2. Steel ropes and nets were suspended from these to form air defences, notably in London during the Second World War.

Most relevant to us, however, is the even earlier use of the captive balloon as a signal in the First World War.

The message was to open fire.

So, when the balloon goes up you can expect imminent trouble. Some sort of attack is likely, maybe coupled with a breakdown in law and order, possibly even culminating in the fragmentation of society as we know it. Remember that you don't know where and when it will happen, but others around you may have been plotting anarchy and insurrection for years. The balloon will activate their sleeping network of fifth-columnists. You will need to know the enemy, so keep your wits about you and choose your allies carefully.

This Entry doesn't encourage you as a civilian to take specific actions beyond following the advice that your government provides. In the UK, this is issued by the Civil Contingencies Secretariat (CCS), a branch of the Cabinet Office. On its website it advises us in the event of an emergency to 'Go In, Stay In, Tune In', and lists some sensible precautions, although these do not extend to counter-insurgency. The BBC has an emergency broadcast strategy, which it manages through its Connecting in a Crisis initiative. In this age of high technology, it may be sobering to know that a battery-powered or wind-up portable radio remains the most robust channel of communication. One with Long Wave will also receive ball-by-ball coverage of cricket on Test Match Special, assuming this survives.

The more military minded among you might prefer to take up self-defence classes or even join your country's reserve forces, such as the UK's Territorial Army. All roles undergo basic training, but be aware that this requires a high level of commitment, and that many reservists will be required to support the regulars on active service.

Will it Really Happen?

One character for whom there was no doubt was Jimmy, Reggie's brother-in-law in the BBC sitcom The Fall and Rise of Reginald Perrin. Often dressed in army-surplus fatigues, Jimmy punctuated conversations with his brand of extreme militarist paranoia.

Reggie3: So come on, Jimmy, who are you going to fight when this balloon of yours goes up?

Jimmy: Do you really think so? I thought support might be difficult.

1In fact, the Montgolfiers used a variety of materials in the early days, including paper, taffeta and burlap.2Supposedly because it was the latter of two types: a) rigid and b) limp.3Played by Leonard Rossiter.4Played by Geoffrey Palmer. He went on to play an almost identical character, Major Harry Kitchener Wellington Truscott, in the Channel 4 series Fairly Secret Army.