Su Doku Content from the guide to life, the universe and everything

Su Doku is a Japanese phrase meaning Number Place. The name is often spelled 'Sudoku' as one word in English.

One possible reason it is so popular in Japan is probably because the Japanese language does not lend itself easily to crossword puzzles, so they do Su Doku instead. Su Doku does not require you to speak a particular language, least of all Japanese, nor does it require you to be good at mathematics, as there is no adding up or other arithmetic involved. While it is traditional to place numbers, you could be placing nine different kinds of fruit, letters, or even colours.

A Su Doku puzzle is a grid of 81 small squares (cells) arranged in a larger square. The grid is also divided into nine 3x3 smaller blocks.

To start you off, the puzzle creator has helpfully placed some numbers for you. Using these numbers, it is possible, using only logic, to deduce the values of all of the other numbers in the grid. How many numbers there are to start with, and the skill with which they are placed, determine the difficulty of the puzzle.

Puzzles vary in complexity from easy to fiendish. Sometimes the puzzle creator will describe a puzzle as fiendish, only for the solver to devour it in five minutes. A little luck sometimes helps in spotting the secrets in the puzzle. The experienced Su Doku puzzle solver should be able to complete an easy puzzle in a few minutes. 'Mild' puzzles taking only slightly longer, and 'difficult' puzzles about half an hour. Fiendish puzzles take longer. Sometimes much longer1.

Here is a simple starting grid to get you going. As Su Doku puzzles go, this one is yawningly simple. 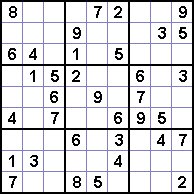 So, where do you start?

The answer is: anywhere you can.

Another way of finding solutions is by 'slicing'. If you look at the top three rows of the puzzle, particularly at the 9s, you can see that there are 9s in both of the top two rows, and in both the second and third blocks. Therefore, the 9 in the third row must go in the first block, and there is only one free square on that row in that block, and so it can be confidently placed there.

You can repeat the same trick with the 9s by looking at the middle three columns. There is a 9 in the first and second columns, and in the top and middle blocks, so the 9 in the bottom block must be in the third column, and again there is only one place it can go.

Time for a new trick. Now that the 9 is in place in the bottom middle group, there are only three numbers missing from that 3x3 block, which are 1, 2, and 7. As there is already a 7 in the middle column (right at the top of the puzzle), the 7 must go in the vacant square to the left. Of the two remaining squares in that block, the 1 cannot go in the central square, so it must go in the top, which leaves only one place for the 2.

By combining information from both columns and rows, the position of the 7 and 5 in the central block can be determined, and this leaves only one number missing from that block, which must be the 1.

The puzzle slowly starts to reveal its secrets. 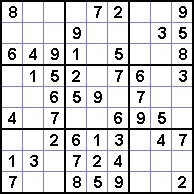 Using those two techniques, known as Slicing and Dicing the easier puzzles can be quickly solved.

The rest of the puzzle is left as an exercise for the reader, although if you are desperate, the answer to this puzzle is at the end of the Entry.

Apart from simply working out each cell by a process of elimination, there are more advanced techniques which the avid Su Doku solver needs to develop in order to solve some of the more fiendishly difficult puzzles.

One useful technique comes in to play when in one of the 3x3 boxes, you have a complete row or column filled out. Once this happens, it is possible to determine the column and 3x3 box in which some numbers lie, even if it is not immediately apparent which of the small squares it lies in. Armed with this information, it becomes possible to place numbers in other boxes elsewhere on the grid.

Look in particular at the number 8 in the centre group. There has to be an 8 in the left hand group, but it is not possible to determine (yet) which of the cells it should go in. However, because it cannot go in either of the bottom two cells in that left hand group, it must go in the centre row, which leaves only one possible cell on the top row (in the right hand group) where the 8 can go.

This then leads on to the mystery surrounding the 1 and 7, which are the only two numbers yet to be placed in the top row of the centre group. While it is not possible (yet) to determine which way around these two numbers go, depending on other numbers in the rows not shown, it may be possible to determine where in the centre row in the left hand group the 1 should go.

Harder puzzles require even more advanced strategies, forcing the solver to look one or two moves ahead and solve a number of what if situations. If, by elimination, there are two or three possible numbers that can go in a particular square, the solver needs to look ahead to see what the consequences of placing one of the numbers will be. If this leads to an impossibility (having to place two of the same numbers in a row, column, or box) then that number is the wrong choice, so it must be one of the other possible numbers.

Taking the UK by Storm

Since making its UK debut in various national papers in November 2004, Su Doku has spread across the country, slowly driving the population insane as they struggle to solve puzzles ranging from simple to fiendishly difficult. The phenomenon has spawned a book, a website, several Su Doku puzzle solving programs, and even a Su Doku puzzle generation program.

Warning: The following is the solution to the sample puzzle above. Stop reading now if you want to try and solve it yourself. 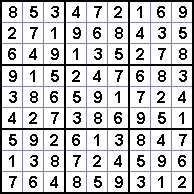 Why not discuss your techniques in the conversation forums, or see what other Games and Puzzles the h2g2 Guide has to offer?

1This Researcher notes that he only solved the fiendish puzzle from December 24, 2004 in The Times on March 19, 2005, and was the first in the office (of six addicted puzzlers) to do so.