Amman, Jordan - A Short Guide Content from the guide to life, the universe and everything 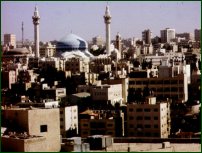 Amman, the capital of the Hashemite Kingdom of Jordan, can be generally described as a sleepy little Middle-Eastern city. Not as 'authentic' as Cairo, not as modern and hip as Beirut, not as historical as Jerusalem, but in its own way still pretty charming, and also a good home base for trips to other places in Jordan.

The earliest traces of settlement in Amman date from the Neolithic period, around 6500BC. In the Bible it is mentioned as Rabbath-Ammon: the capital of the Ammonites, a people who fought many wars with the Israelites. However, the earliest reference to Amman after the time of the Bible is from the third Century BC, when the Ptolemaic Greeks renamed it Philadelphia after the Ptolemaic ruler Philadelphus. Later it has been conquered by the Seleucid Greeks and the Nabateans, and in 30BC was taken under Roman rule by King Herod, who re-planned and reconstructed it in typically grand Roman style with a colonnaded street, baths, a theatre and impressive public buildings.

During the Byzantine period, a Christian bishop sat there, and several expansive churches were built. The city declined somewhat during the late Byzantine years, was overrun by the Persians in 614AD, and conquered by the Arabs shortly afterwards, in 635, when it was given the name Amman after its ancient name Ammon. It had served as an important stop on the caravan routes for many years, but eventually trade patterns shifted and the city declined again, and was left as a little more than a provincial village for many centuries. In 1878, the Ottomans resettled a colony of Circassian emigrants there, but throughout that time the city remained small and unimportant, and the regional administrative and political centre was in the neighbouring city of Salt.

The Ottoman Empire was dismembered after World War I and the British gained control of the area under a League of Nations mandate, creating the entity called Transjordania (later to become the Kingdom of Jordan), and picking the Hashemite Dynasty to rule it. In 1921, Prince Abdullah bin Hussein, later to be the first King of Jordan, chose Amman as the seat of his new government, and when the British mandate ended in 1946 and Jordan became independent it became the capital of the Kingdom of Jordan.

A major factor in Amman's growth since then was the arrival of several waves of refugees - first Palestinian refugees who arrived after the wars of 1948 and 1967, and more recently immigrants from Iraq and Kuwait following the 1990 - 91 Gulf Crisis. According to the last census, there are now almost a million people living in Amman, out of which over a 100,000 are defined 'non-Jordanian'.

Getting There and Getting Around

Travellers from abroad are most likely to be landing in Amman's International Airport, Queen Alia. If you're coming from one of the neighbouring countries you could come in by bus, taxi or a Serveece - which is a sort of a combination of the two1. It's easy to tell the difference between a taxi and a Serveece, because the taxis are yellow and the Serveeces are white; also, since the Serveeces have routes (more or less anyway), they have their service area written on the front doors.

These three forms of transport are also what you're likely to be using on your trip. You can rent a car, or come with your own car from a neighbouring country, but driving can be pretty scary, as the Jordanians are typical Middle-Eastern drivers, who tend to disregard traffic laws, their fellow drivers and pedestrians all alike. You can of course walk from place to place inside the city if you have a good map2, but this could get quite boring. Public transportation, however, is easy to find and ridiculously cheap, so it is highly recommended to use it.

Inside the city you should probably stick to taxis and Serveeces, because the buses could be tricky unless you know the place very well (even though, in what might be a first for an Arab country, Jordan is now constructing a bus information system that you can call with queries). A taxi ride shouldn't cost more than a Dinar or two, and even less if it's just a short way, but remember to make sure the driver is operating the meter3; if he says that the meter is broken, get out and find another taxi, because you are probably being cheated. Serveeces are much cheaper than taxis, but you need to find one that is going the right way.

If you're going outside the city, a taxi would get too expensive, and it's better to get a Serveece or a bus. Minibuses to all main destinations leave quite regularly4 from the Wihdat or Abdali bus stations and cost mere pennies. They tend to be crowded and rickety and to drive much too fast, but they're still a good means of transport. To some destinations there are also nice big coach buses, that are only slightly more expensive than the minibuses.

What to See, What to Do

It is probably safe to say that Amman can be 'covered' in one day or so. There are some pretty Roman ruins - mainly the Roman theatre downtown and the Citadel5 up on one of the hills, where there is also a nice reconstructed early Islamic part. Both these places have small museums in them, entrance to which is included in the price of the entrance ticket: an archaeology museum at the Citadel, and two very similar museums, the Folklore Museum and the Popular Traditions Museum, at the Roman theatre. The museums are rather small though, and for those accustomed to the western standards they will probably look shabby and unkempt.

There are also a couple of large mosques that you can visit; the most notable ones are King Hussein (or Al Husseini) Mosque downtown, and the big and modern-looking King Abdullah Mosque near Abdali Bus Station6. The mosques are nice, but not incredibly impressive.

A bit of a walk uphill from the King Hussein Mosque is a lovely little gallery called Darat el Funun. They have modern art exhibitions that change every couple of months, and a charming little café where you can take a break from the gruelling climb up the stairs to the building.

Other than those places, you can spend quite a lot of time walking around downtown, between the small alleys and the markets (souqs) and all the little restaurants. It is a pretty safe city, even for a woman travelling alone, and wandering about like that is definitely very fun. Most travel guides mention the Gold Souq near the King Hussein Mosque, but if you are not interested in buying gold there isn't much to it, just a long row of jewellery shops.

As mentioned before, Amman can be a good base for trips to other places in Jordan. Most of the major destinations are no more than a few hours' drive away, except perhaps Wadi Rum, which is further south and therefore closer to Aqaba.

A number of nice day trips that you can do are:

The concept of street names was only introduced to Jordan relatively recently, so most people tend not to use them. When giving directions to a taxi driver, for instance, it is best not to give an address but to use landmarks. Hotels make pretty good landmarks, as do the seven circles that are the historical base of Amman's traffic system.

If you are a woman, you must never walk outside with your hair wet. For some inexplicable reason, this is interpreted as a sign you have just had sex.

Gifts: A nice idea for 'a little something to bring back home' is one of the lovely tin boxes of Arabic sweets sold at the branches of the famous Zalatimo Sweets stores. They're good, pretty cheap, and carefully wrapped in a way that makes them ideal for carrying on a trip. If you're interested in local crafts and willing to spend more money, you can try Bawabet al Shark or the Jordan River Foundation on Rainbow Street, two nice crafts shops where you can find unique - and very expensive - household items.

Internet: There are countless Internet cafés downtown, and the prices are usually no more than a Dinar an hour. Some of the fancier hotels provide wireless hotspots, but those are only available to hotel guests.

If you are a student, have an International Student Card with you, as sometimes there are discounts - the most significant one is in Petra, where a student fee is half the standard fee.

Most websites you will find about Amman are by various travel companies, and therefore tend to make things sound grander than they really are, so you should remember to read them with a critical eye. However, some nice ones are:

1Note for Israeli travellers: At the moment Israelis are not allowed to use the Allenby Bridge Border Pass, which is the closest to Amman, so it is necessary to come through either Aqaba in the south or Sheikh Hussein in the north.2Those can be hard to find in Amman; try the merchandise stalls in the Roman Theatre, or other major tourist spots.3Adad in Arabic.4This does not mean, however, that they leave in a certain hour; buses leave the station once they fill up with passengers.5Al-Qasr in Arabic.6It is better to get there in the morning if you want to get in, because you cannot always enter it.7It might be familiar to some as the location of the final scenes from the movie Indiana Jones and the Last Crusade.8Or whatever is left of it after its exploitation by the mineral companies of Israel and Jordan.