William Henry 'Fatty' Foulke 1874 - 1916: English Footballer and Cricketer Content from the guide to life, the universe and everything 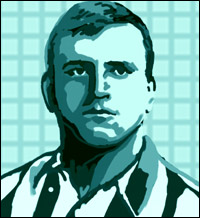 Perhaps the most talked of player in the world - a leviathan at 22 stone with the agility of a bantam.
The Men Who Made Football, 1904

William Foulke was a cricketer, playing four first-class matches for Derbyshire in 1900, but it is as a football goalkeeper that he is remembered to this day and he was certainly a larger-than-life character.

Also known as 'Bill', 'Billy' and 'Willie', Foulke first played in goal for Sheffield United in 1894 at the age of 19 and weighing in at around 15 stones. His height has been variously given as between 6'2" and 6'6" and in his day, he towered over his fellow players2. He is cited in the Guinness Book of Records as being 6'3" and 310lb. Other sources point to him as being 'at least 25 stones' at his heaviest.

Sheffield United, his first club, was one of the movers and shakers at the turn of the century. At the time of his starting to play, Sheffield's goalkeeper was Arthur Wharton, who made history in his own way, being one of the first black professional footballers3, and he replaced him in goal4.

Although a big man, Foulke was surprisingly agile, and at a time when goalkeepers could be shoulder-charged into the net, his weight was clearly an advantage. He was also expert at saving penalties and was also known to charge upfield to the opposing penalty spot.

While at Sheffield, he helped them to win the FA Cup twice and got a loser's medal in 1901 against Tottenham Hotspur FC, then a non-league side and the match drew a crowd of 114,815, then a world record. The match was drawn at first and Spurs won the replay, however the match report of the drawn match makes fascinating reading.

Whilst with United, he played in goal for England vs Wales in March 1897. England won 4-0.

Who ate all the pies?5

I don't mind what they call me as long as they don't call me late for my lunch.

William Foulke moved to Chelsea FC for the transfer fee of £20, where he was made captain and became the darling of the crowds, with his ability to punch the ball over the half-way line. He made 35 appearances for them. His love of eating was also remarked upon and stories abound of how he often would arrive early for breakfast, set out for the whole team, and scoff the lot! He was a colourful character and there are stories of his having picked up a forward who had said something to offend him and holding him by his feet upside down over the muddy pitch. During a match with Burton Albion FC (the day after his breakfast feast) he stopped two penalties, and the forward who missed the penalties is said to have complained, 'Where else could I have placed the kicks. There was nowhere else to aim!' William Foulke Stories were plentiful and he is said to have sat on people who teased him until they apologised.

Foulke stayed at Chelsea for just one season (1905 - 06) before moving on to Bradford City FC, his last club. Whilst playing against Accrington Stanley FC6 in February 1907, it is said that Foulke's jersey clashed with the red of Stanley and no-one could find a jersey large enough to fit him, so he played wrapped in a sheet, procured from a nearby house. Bradford won the game 1-0 and Foulke didn't dive during the match, so he kept a 'clean sheet'.

It was during his time at Bradford that he snapped the cross-bar in two while saving a goal, causing the match to be stopped.

The Sun Going Out

Towards the end of his life, William Foulke fell on hard times and was to be found at Blackpool Sands, making a few pennies by saving penalties in a 'beat the goalie' attraction. It was there that he caught pneumonia and he died in 1916, aged only 42.

1One source has him being known by an alternative nickname - 'Tiny.'2If you scroll down this link you'll see a picture of him with his team, who are tiny in comparison.3It is believed that the first black professional footballer was Andrew Watson, who represented Scotland in 1881 - 2.4Wharton was coming towards the end of his career.5It is said that this football chant originated because of his love of the pies sold at football matches.6Accrington Stanley FC resigned from the Football League in 1962. A new club was reformed in 1968 and currently plays in the Conference League.