Hobos Content from the guide to life, the universe and everything 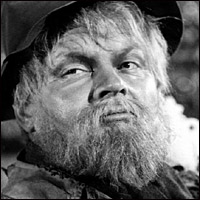 In hobo-land, the face of life is protean — an ever-changing phantasmagoria, where the impossible happens and the unexpected jumps out of the bushes at every turn of the road. The hobo never knows what is going to happen the next moment; hence, he lives only in the present moment. He had learned the futility of telic endeavour, and knows the delight of drifting along with the whimsicalities of Chance.
- Jack London

Quite simply, a hobo is a fierce individualist who travels at his leisure, working when he can, ignoring things like railroad ticket fares, taxes and common social practices such as showering. Like the modern hitchhiker, the hobo cannot stay still, and uses everything at his command to survive.

Generally found in the United States of America, hobos (or hoboes) abhor ambition and responsibility. For some people, a life of aimless, ceaseless wandering is an attractive one. For others, the life of a hobo is a necessary one, left as a last resort. Owing to their aversion to authority figures, hobos are largely undocumented in the annals of American history, which has contributed to their elusive character. Unfortunately, in all probability, the number of hobos in America has steadily declined since the Great Depression1, owing partly to an increase in prosperity and partly to the decline of freight travel.

'Hark' 'I hear her whistling,
I must catch her on the fly:
One more scoop of beer I'd like,
Once more before I die.'
The hobo stopped, his head fell back,
he'd sung his last refrain.
His partner took his hat and shoes,
and caught the east-bound train.
- A common hobo poem

Hobos are popularly thought of as wearing tattered rags, with a sooty face and carrying a bindle fashioned from a stick and a bandana. This is partly to do with comedians such as Red Skelton and Charlie Chaplin who cultivated this image with characters such as 'Freddie the Freeloader' and 'The Little Tramp'. In fact, hobos were and are as diverse in appearance as any other slice of the human pie.

Hobos live on a combination of hand-outs, theft and when possible, work. Within the hobo community, there is some controversy as to whether or not a true hobo works. Some hobo authorities believe a non-worker is never truly a hobo, but rather is a tramp, or bum2. Hobos essentially live outside of the law, and would be just as likely to rob someone as to ask for food. Unfortunately, hobo-on-hobo crimes occur very frequently, ranging from theft to rape and murder. Most hobos seem to have a common bond though, and work together for their mutual survival.

In the early 1900s, the growing fraternity of hobos developed an intricate system of graffiti (or 'hobo signs') to give travelling tips to other hobos. Four prongs inside a rectangle on a fence indicate that an ill-tempered dog inhabits that yard. A top hat and triangle may indicate that a family is wealthy. An X inside of a circle would mean that the place is ripe for a handout. Of course, just as with any language, hobo signs vary slightly from place to place.

[...] when we quit the road at night,
And the birds were folding up their music-bars,
Just to smoke a little bit; rub his chin a while, and sit
Like a Hobo statue, looking at the stars.
- From the poem 'Overland's Delight' by HH Knibbs

Hobos often adopted memorable monikers in their travels. A hobo particularly adept at playing a five-string might call himself 'Banjo Bill'. Humorist John Hodgman created a List of 700 Hobo Names for his book The Areas of My Expertise, with names ranging from 'Stewbuilder Dennis' to 'Trainwhistle Ernie Roosevelt, the President's Long-Lost Brother' (appended to the paperback edition is another 100 hobo names, for use 'in case of an emergency'). The simplest formula to create a hobo name is to put a noun in front of a single name (though an adjective will do in a pinch). Some real-life hobo names include:

I took a freight train to be my friend, O lord,
You know I hoboed, hoboed, hoboed,
Hoboed a long, long way from home, oh yeah
- From 'Hobo Blues', by John Lee Hooker

'Hobo' is a kind of funny word. The combination of syllables seems an odd thing to call another human being, but no one knows exactly where the word came from. There are several theories though. One theory is that it comes from taking the first two letters of the two words 'homeward bound' - which doesn't really quite fit, given that hobos didn't generally have homes. Another theory is that 'hobo' is a shortened form of 'hoe boy', which is something a young migrant worker could be called when working at a farm. A variant of this theory is that early hobos carried their possessions in a cloth attached to the end of a hoe, thus creating the epithet 'hoe boy'.

There are two other theories which involve, of all things, the French language. The first is that the word comes from a corruption of the French word 'hobereaux', meaning a small-time, or unprosperous, land proprietor. The second theory says the word came from an adaption of the greeting which railroad workers gave when a train came in, 'Ho, beau!' roughly meaning 'Hello, beautiful!'. Hobos, being intimately familiar with railroads, may have picked this up for themselves.

Two additional theories come from the vicinity of New York City. The city of Hoboken, near NYC, contained an important railroad junction for many years. Many hobos hopped aboard the trains going out of Hoboken. Another meeting place for hobos in the area was Houston and Bowery Street in Manhattan. An abbreviation of Houston Street makes up the second half of the name of the NYC neighborhood of SoHo, so it is not entirely unlikely that Houston and Bowery became HoBo.

You wonder why I'm a hobo and sleep in the ditch
Well it's not because I'm lazy, I just don't want to be rich.
Now I could be a banker if I wanted to be,
But the thought of an iron cage is too suggestive to me.
Now I could be a broker without the slightest excuse,
But look at 1929 and tell me what's the use.
- A hobo poem

In the late 1800s and early 1900s, the United States of America simultaneously became more industrialised and pushed ever westward. As these changes occurred, the state of labour changed in the country. Depending on the time of year, labour could be needed in one part of the country and not in another. To accommodate this, a class at the lower end of the socio-economic spectrum sprang up to travel where they could get work. These early migrant workers were the first 'hobos'.

The heyday of the American hobo was in between the American Civil War and World War II. This period is, not coincidentally, the time when railroads were most important in America. Working hobos helped to build the massive network of rails which criss-crossed the continent. Having laid the rails, they took advantage of them. Railroads were to become the lifeblood of the subculture of the American hobo. During the height of hobodom, historians estimate that between 500,000 and 1.5 million hobos were traveling around the country for work at any given time.

Wars and economic depressions are important to the story of the hobo. Many of the first hobos were veterans of the US Civil War (suddenly unemployed following the outbreak of peace), or victims of the economic recession of the 1870s. The Great Depression, coupled with World War II boosted the number of hobos considerably. Even more recently, hobo veterans of the Vietnam War banded together to form the Freight Train Riders of America, which has grown in reputation as a criminal hobo group.

One famous hobo in history was US Supreme Court Justice William O Douglas, who travelled while seeking work as a youth. He would go on to become the longest serving member of the Supreme Court ever and a steadfast champion for individual rights against the power of the state (perhaps influenced by the rugged individualism and anti-governmentalism of his hobo years). Another famous hobo was author Jack London, who wrote a book about his itinerant days called The Road. He generously dubbed hobos 'knights of the road' - a term which is used by many hobos today. No less an American than Mark Twain also spent a portion of his youth hoboing through the American West before he became a journalist and writer.

Today, hobos still roam the railways and roads of the United States. In modern times, the bundle on a stick has been replaced by the more practical backpack or just a plastic bag. Automobiles have now replaced trains as the preferred method of hobo transport. In the time of the automobile, writer Jack Kerouac and other members of the 'Beat generation' drew inspiration from the romantic image of the hobos.

The information age has meant that hobo signs have been replaced by mobile phones, websites and email. There is even a yearly hobo convention in Iowa, the second week of August. If you're interested in attending, simply hop aboard a freight train and follow the smell of freedom.

1Another outcome of the hobo aversion to authority figures is the fact that the US census and other surveys do not count itinerants. So you can never be sure.2According to most hobos, a hobo is someone who travels and works; a tramp is someone who travels and refuses to work; and a bum is someone who refuses to travel, refuses to work, but drinks instead.3The Rambler, also known as Leon Ray Livingston, was born in 1872 and was perhaps one of the most famous hobos in history. He left his mark, 'A-No. 1' wherever he travelled - which was quite a lot of places. He also helped devise the 'hobo-signs' system. He was known by some as The King of the Hobos.