Benjamin Zephaniah - Poet, Novelist, Playwright and Activist Content from the guide to life, the universe and everything 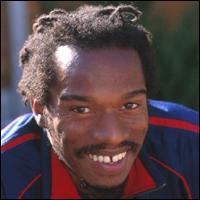 I have been called a dub poet, an oral poet, a performance poet, a pop poet, a pub poet, a rap poet, a Rasta poet, a reggae poet and even a black poet, the list goes o n. In all honesty, none of those titles offend me, I am probably all of these persons but if I had to choose one I would start with oral poet.
- Black History Month

Benjamin Zephaniah is a novelist, playwright, campaigner for animal and human rights and has been described as a variety of different types of poet. He is recognisable for his dreadlocks and has an air of youth about him. The British Council says:

Though of medium height, Zephaniah fills an auditorium with his presence as soon as he comes in: dreadlocks down to his waist, a feline gait, gleaming eyes and a smile which can be all tenderness at one moment and all mischief at another.

The Streets Aren't Made of Gold

Born Benjamin Obadiah Iqbal Zephaniah1, on 15 April, 1958, in Handsworth, Birmingham (or 'Brummagem' as Zephaniah calls it), he was predominantly brought up by his mother. In an interview with Children's Express he explains why.

I was raised by my mother. And my father, at one point in their relationship, got very violent and my mother found it necessary to move out. Having said that, I had other male role models around me, some good, some not so good. I think that it's important to have good people around you.
- Zephaniah

Before he was born his mother made the decision to travel to Britain from Jamaica. She had seen an advert suggesting the streets were paved with gold. One of the first poems he wrote was dedicated to his mother and reflects this.

When I was your age, I loved my mother and my mother loved me, We come so far from over the sea, We hear that the streets are paved with gold, Sometimes it's hot and sometimes it's cold.
- Zephaniah

When he first recited this poem to his mother, she told him off and sent him to bed. Now he jokes that when he reads it she asks, 'how much did you get for reading it aloud this time?'.

Of course, his mother found the streets weren't lined with gold, but she was still keen on living her life in Britain and became a nurse. She settled down in Birmingham and had Zephaniah. He later wrote about Birmingham in the poem The Big Bang. The BBC once asked Zephaniah whether it had changed much to which he replied that it had:

But for me it's still the centre of the universe and I was just a little toddler when I found poetry there - or poetry found me.

Zephaniah attended St Matthias School in Birmingham where he was plagued by racial comments, was stereotyped and much to his reluctance was picked to be the captain of the school's cricket club. He remembers the last time he played cricket vividly:

The ball bounced in front of me and almost flattened an ant, as it came up I went to strike it but it came up so fast I couldn't see it, the ball hit my right hand and broke my longest finger. I ran to the medical room shouting things like, 'I hate cricket!' and 'Mom!' and I've never played cricket again.
- Zephaniah

At school he was also branded 'a born failure', but has since been found to be dyslexic. He feels that the education system failed him; not the other way around. Despite his struggle to learn, Zephaniah soon found a talent for poetry and started publicly reciting poems in his local church at 55, Bevington Road when he was 11. The poem No Problem featured in Benjamin Zephaniah - A Picture of Britain reflects the way he was treated at school.

Zephaniah was 11 when he turned vegetarian and he became a vegan at 13. He is now patron of Viva, who support vegetarians and animal rights and supports PETA (People for the Ethical Treatment of Animals). He tells Viva about becoming a vegan:

Being Ital2 is also in keeping with Rastafarianism.

Zephaniah also fell in to the wrong crowd as a young child and recalls:

When I was a boy, sometimes I was bullied - I've also bullied other people. It's complicated. I've been part of the in-crowd and I've been in a tough gang, but deep down I was a poet and I wanted someone to talk to, to get out of the gang.
- Zephaniah

The gang also stole cars and drove them around, but they always put them back where they originally found them. They also stole things from the cars and sold them on. One day a police man stopped them and they pretended to be Bob Marley and the Wailers. The policeman took these names and released them. Then at the age of fourteen Zephaniah was expelled from school and sent to Boreatton Park3 in Shropshire, which was at that time an approved institution. Zephaniah was desperate to escape from the place he called 'Dracula's house' and one day ran into the woods.

I remember it really well, I managed to get out of the hall and I just ran and ran into the woods. I was gone for hours and then I looked up and I could see the hall and realised that I'd gone around in one great circle.
- Zephaniah

Zephaniah then spent time in two of Her Majesty's institutions including Winson Green. There he spent time reflecting on what he wanted to do with his life and decided, 'I'm going to use this energy differently. I've got the talent to be a poet...I wanted to educate myself, be a bit more spiritual, a bit more political'.

As a teenager he wrote a letter to Bob Marley who responded. Zephaniah reflects:

I actually got advice from brother Bob: he told me to 'keep it up', to 'stay militant', and he said that one day people would read my poems.

Since then, he has had a Number One hit record in Yugoslavia and recorded a tribute to Nelson Mandela with Marley's backing group The Wailers. Mandela heard the tribute Free South Africa in jail and on release met up with Zephaniah, who recalls:

I'd done some work with the ANC while he was in prison. The second time he came to Britain, he asked to meet me. He really appreciated the link between art and politics. When I first met him, I wanted to thank him for all he'd done, but he kept thanking me. I've met him four times now.
- Zephaniah

At first publishers turned Zephaniah down believing that audiences would not be interested in hearing Rastafarian poetry or black poetry, and they didn't understand it because it was supposed to be performed. Then the publisher Page One Books told him that they'd publish his work and in 1980 his first book Pen Rhythm was released. The anthology proved so successful that he soon started plotting his next poetry anthology The Dread Affair: Collected Poems. Unlike the first book Zephaniah took more consideration over his second anthology as his target audience were those that didn't read. For Zephaniah illiteracy is something he can relate to as he didn't start reading and writing until the age of 21. He believes that performance poetry can be enjoyed by everyone, rich, poor, young, old, those who can read and those that can't.

Zephaniah is inspired by Jamaican music and also likes to perform his poetry with bands. His recordings include Us and Dem, which was released in 1990 and Belly of de Beast which appeared in the shops in 1996. In 20044, he released the album Naked, which also features fellow musician Trevor Morais and work from the well known graffiti artist Banksy.

During the 1980s Rastafarians and punks took to the streets and protested about the National Front, unemployment, homelessness and unfair laws. Realising that Zephaniah's work was political they often recited it at demonstrations and nightclubs. On 10 July, 1981, the first riot in Handsworth broke out and Zephaniah was asked to release his new poem Nice One Handsworth on television. However, due to the riots the poetry recital was postponed.

The TV people said it may come over as inflammatory; I suppose they had a point but the poem's about not rioting.

Towards the end of the 1980s Zephaniah narrowly missed winning the title of Oxford Professor of Poetry and appeared at demonstrations, concerts and on television. In one television series he appeared alongside comedians Dawn French, Jennifer Saunders and others; he was also in The Comic Strip in which he played a Rastafarian police van driver.

Zephaniah has also travelled widely over the years and penned poems about far away places and the culture and the people who inhabit those lands. Rasta Time in Palestine (1990) for example, talks about his visit to the Palestinian occupied territories. Over the years, he has been booked to give recitals and to talk about his poetry in prisons, youth groups, universities, schools, theatres and music venues around the world and he has even made appearances on both the radio and television. His work has earned him honourary doctorates from a variety of places including the London South Bank University, the University of Exeter and the University of Westminster. In 2003, he turned down an OBE, remarking that anyone who'd ever heard his poetry would know he didn't want to be associated with the injustices of the British Empire.

1His names are of Christian, Jewish and Muslim origin.2Ital from the word 'vital' is another way of saying that someone is a vegan.3Today, (2008) Boreatton Park is an activity centre for children.4Benjamin Zephaniah is also involved with a project called The Imagined Village, which was founded in 2004.