Mehran Karimi Nasseri - In Transit Content from the guide to life, the universe and everything 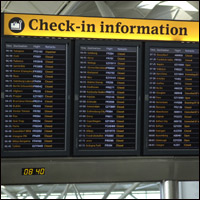 This is a story that many will take to be an urban legend, and, let's face it, it should be. Unfortunately, unlikely as it may seem, it's true - and the sort of thing that could happen to almost any of us.

The Road to Perdition

Mehran Karimi Nasseri was born in Iran to a local physician and a British nurse - possibly. The facts of his early life are difficult to authenticate. But he did study in England prior to returning to Iran in the 1970s. A politically minded student, Nasseri came to the attention of the Iranian authorities while protesting against the shah of Iran. The punishment was severe and resulted in him being expelled from the country - minus his passport.

Nasseri was then a 'traditional' political refugee for a while, flying around European capital cities seeking asylum. He was refused entry to every country he approached, until four years later when he was given refugee status in Belgium. His new status and credentials allowed him to seek citizenship of any European country, but Mehran wanted to be selective. He spent six years in Belgium prior to deciding he had a future in the UK. Having a British parent, he decided to search for her in England, where he could possibly establish some roots. Nasseri embarked on his journey via Paris.

This is the point where things began to go really pear-shaped. While travelling on a train in Paris he was apparently mugged and lost his briefcase containing his refugee documentation. It's never a good idea to attempt to travel without the correct documentation, but Nasseri nevertheless presented himself at the airport for his flight. The French authorities at Charles de Gaulle Airport allowed him to travel despite the serious implications of his lack of documentation.

Predictably, this lack of documentation was noted on his arrival at London's Heathrow Airport. There was no way in the world he was going to make it through immigration. Nasseri didn't even get beyond passport control before being seated on the return flight to France.

On arrival at Charles de Gaulle, he was arrested for attempting to enter the country illegally, having no papers to substantiate his previous predicament. The lost papers also meant the French had no country of origin which they could return him to. This was a pretty pickle with no obvious solution, so the police returned him to the confines of the airport.

Without documentation, Nasseri was unable to fly anywhere, nor was he able to leave the airport to enter France proper for fear of being rearrested for illegal entry. Nasseri had arrived at his own personal hell: Terminal One, Charles de Gaulle Airport.

Nasseri set up a temporary base camp on a red bench on the restaurant floor of Terminal One, and managed to find himself a solicitor. His solicitor battled in vain with the French authorities to get Nasseri some sort of status - a refugee or transit visa. But the best the courts could offer was somewhat less.

It was decided he had entered the country legally in the first instance. He couldn't therefore be evicted from Terminal One, but neither could he leave it and enter France proper, since the court couldn't force the government to give him a political status.

The focus then changed to Belgium, his adoptive country of origin. If Belgium could be persuaded to reissue his refugee documentation he would again be 'someone', and be free to travel. The Belgian authorities were unable to post such important documents to France, though, never mind to such a vague address as Terminal One. The only thing they could do was reissue them, if he presented himself in person for identification purposes. Now that was Nasseri's catch 22: he couldn't travel to Belgium without the documentation, and he couldn't get the documentation without travelling to Belgium.

Just to rub salt into his wounds, the Belgian government eventually decided to refuse him entry into the country even if the French allowed him to travel without documents. This was apparently due to a Belgian law which stated that, having been granted refugee status by the country then voluntarily leaving it, you can never return. So his fate was sealed.

Is This Seat Taken?

Most of us have been told at some point or other that the flight we're due to be on has been cancelled or delayed for a time. But airport lounges aren't designed for long-term stays. Even an over-nighter at the airport, or morning ablutions in the public toilets, won't give you any indication of what Nasseri went through.

Nasseri spent a total of 18 years in Terminal One; his living area was a red bench, a bistro table and a luggage trolley.

Shocking as this is, he was thrown a few lifelines during his stay. The Belgian government offered to let him return to the country in 1995 on the condition that he lived in the care of a social worker. He declined this offer because, in his mind, he was on his way to London. Nasseri's refusal to budge was thought to be indicative of his deteriorating mental state following his first seven years at the airport.

In 1999, the French government gave him another chance to leave the confines of the terminal by offering him temporary residency. This he declined because he felt the government had incorrectly identified him as Iranian in the documents. Clearly to him, he had ceased to be Iranian when the country expelled him in the 1970s. Eleven years after his journey began, Nasseri was showing all the signs of having become institutionalised like a long-term prisoner.

Nasseri obviously felt secure in Terminal One and built up a unique relationship with staff. He was visited regularly by the onsite doctor and relied on the good wishes of staff and fellow travellers for food and drink. He did not, however, like to accept 'charity' and returned donated clothing to its source with a 'thanks, but no thanks'.

Nasseri was the subject of a few documentaries during his time at the airport, and at least one French film, but true fame came all the way from Hollywood.

Film director Stephen Spielberg heard of Nasseri's plight and sent his minions to purchase his life story. The subsequent deal supposedly made Nasseri the richest homeless man in Europe, and quite possibly the world. His fee of $200,000 - $300,000 was paid into his account at the airport - but he made no notable changes to his lifestyle. In 2004, The Terminal, starring Tom Hanks, was released. But this film is a fictional account of life inside such a building, and shares only a passing resemblance to Nasseri's plight.

Freedom for Nasseri didn't come as he would have wished (with a flight to London). He was instead hospitalised in 2006 for reasons unknown. Speculation aside, Nasseri was allowed to begin a new life from a homeless unit in France, where he now lives and hopefully enjoys his new-found freedom.

Should you be travelling any time soon, please remember to keep your documents safe and spare a thought for the tired-looking traveller catching 40 winks in the lounge. It could be that they've had a longer delay than anticipated, or maybe they've even chosen to live there.