The Nabateans Content from the guide to life, the universe and everything 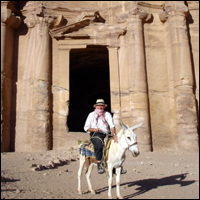 The Nabateans were a group of Arabs - former nomads - who became prosperous when they settled in an area where they could control overland trade routes. Although they were not one of the great historical civilisations in terms of either extent or duration, they were very wealthy and managed a degree of success for several centuries. The Nabateans developed a unique architectural style, carving tombs and temples directly into the multicoloured rock of the hillside. They are now best remembered for the ruins of their magnificent capital, Petra, today in Jordan.

Our sources of Nabatean history are fragmentary; there are gaps and a lack of clarity in our understanding. They most likely spoke Aramaic, a widespread language at the time and the one Jesus spoke.

They marched into history from the deserts of Arabia sometime around the 6th Century BC. The Biblical land of Edom where they settled later became known as Arabia Petraea, after their capital (which may have previously been an Edomite settlement). There are further Biblical connections: according to local legend, Jebel Haroun is the Biblical Mount Hor where Aaron died and was buried, and Ain Musa is where Moses struck a rock with his staff to create a spring during the Exodus.

The Nabateans are believed to have arrived in Transjordan (the area immediately east of the River Jordan, roughly corresponding to the modern Kingdom of Jordan) around the 6th Century BC. This was part of a general westwards migration caused by the displacement of other peoples. As the Israelites were defeated by the Babylonians and taken into exile, the Edomites moved to take the superior Israelite territories. The Nabateans in turn moved into the former Edomite lands. The first sign of permanent settlement in Petra is at around this time: the ruin of a temple on Umm al-Biyara, the cliffs to one side of the Siq.

They were initially bandits, raiding the caravan routes that ran through the region. However, the Nabateans quickly realised that far greater profits could be made from taxing caravans in return for shelter and protection. It was on the basis of this that their empire grew and prospered. They exploited their monopolies on frankincense and myrrh (both used in religious rituals), and also dealt in copper, iron, Dead Sea bitumen, pepper, ginger, sugar and cotton.

The borders of their territories were always somewhat nebulous. The Nabateans essentially controlled a series of oases, and by extension the surrounding deserts which were virtually impenetrable without access to water.

Shortly after this time, the Syrians began to expand after the collapse of the Babylonian Empire and Arabia Petraea fell under their control for several centuries. Alexander the Great drove the Persians out of Transjordan in 332 and 333 BC. Upon his death, the kingdom was divided between two of his generals, Ptolemy and Seleucus. These two dynasties competed over Palestine, with the Seleucids capturing it from the Ptolemies in 198 BC. These Greeks would leave a lasting cultural influence on the Nabateans.

The Roman historian Diodorus Siculus mentions 'Arabs who are called the Nabatei' being attacked by Antigonus the Seleucid. After a fairly inconclusive raid and counter-attack, the Nabateans bought the Seleucids off and became independent. This ability to defend themselves militarily wherever possible, and buy off their opponents at other times, would become a recurring strategy. The Seleucid and Ptolemaic dynasties maintained an ongoing rivalry in the region, which helped the Nabateans to carve out a niche for themselves. Later, they were an occasional thorn in the side of Roman interests in the region.

Judas Maccabeus invaded in 165 BC, taking the fertile lands to the east of the River Jordan and almost splitting the Nabatean territories in two. Now only their network of oases linked the capital at Petra in the south with their northern territories. Nevertheless, they regrouped and by 80 BC had taken control of Damascus. This was to be the greatest extent of their Empire. As the Greek Empire collapsed and the Roman Empire expanded, the Nabateans controlled well over two million square kilometres (by comparison, the Roman Empire at its peak stretched to around five million square kilometres). For a few brief years, the Nabateans had the second-largest empire on Earth, after the Han Dynasty in China.

Less than 20 years later, in 64 BC, the Roman general Pompey captured Damascus and the Nabateans were forced to pay tribute to him; the price on this occasion was 300 talents of silver. (Since we do not know exactly how much a talent weighed, and the silver prices fluctuate, it is difficult to say exactly how much this would have been worth. However, a rough calculation indicates it would have been equivalent to about 15 tonnes of silver, worth around £4 million in January, 2008.)

In 44 BC, they ill-advisedly sided with the Parthians, who were revolting (or at least rebelling) against the Romans. Upon their defeat by the Romans, the Nabateans were once again forced to purchase forgiveness from them. Another bad year was 31 BC, when Herod the Great took a chunk of their land. He then married the daughter of the Nabatean king Aretas IV, which seemed a promising arrangement for the plutocratic Nabateans. However, Herod quickly divorced her in order to marry his brother's wife. (It was this incestuous marriage that caused John the Baptist to speak out against him; he was imprisoned and eventually beheaded.) Insulted, Aretas attacked and defeated Herod.

By 70 AD the Nabateans had learnt from their errors and sided with the Romans against the revolting Jews.

At the height of Nabatean success, the historian Strabo describes Petra as being filled with villas and gardens. He mentions their cosmopolitan nature, stressing the differing races to be found there. Strabo also claims that it was punishable by law to make investments which lost revenue for the empire, while successful traders were rewarded.

The Decline and Fall of the Nabatean Empire

Nabatean success was based on the trade routes that ran through their territory. With the opening of shipping lanes that circumvented Arabia entirely, and the Roman sponsorship of an alternate overland route through Palmyra to the north, trade through Petra began to drop off. Nabatean independence came to an end in 106 AD when their final king, Rabbel II, sold the empire to the Romans upon his death (a fitting end to one that was based on commerce).

Petra underwent a renaissance under the Romans, but by 300 AD the city was also in terminal decline. In 447 AD the Urn Tomb was converted into a church - a sign that the indigenous religions were dying out. After the earthquake of 747 AD the city was finally abandoned.

Historical References to the Nabateans

There are very few historical references to the Nabateans. The earliest undisputed one comes from 647 BC when they were listed as enemies of Ashurbanipal, the last emperor of Assyria. The Bible, in a passage probably written at around this time, also mentions a tribe of people descended from Nabioth, the eldest son of Ishmael, son of Abraham. These are widely believed to be the Nabateans, although they are not named in the text.

Diodorus Siculus, writing in around 50 BC, quotes Hieronymous of Cardia, who mentioned the Nabateans in 312 BC in a now-lost work, and goes on to paint the Nabateans as primarily nomadic:

One tribe, the Nabateans, only 10,000 men, are famous for their riches. They sell incense, myrrh and other spices to the Mediterranean countries and get these merchandises from Arabia Felix in the South. Their country, without water, is impenetrable to enemies, but the Nabateans possess cisterns to collect rain water, the place of which is known only to the inhabitants of the country. Their animals are watered every three days to accustom them to a flight throughout a waterless country. They eat meat and drink milk, also pepper and a resin diluted with water.

The houses are sumptuous, and stone. The cities are without walls, on account of the country peace [which prevails among them]. A great part of the country is fertile, and produces everything except oil of olives; [instead of it], the oil of sesame is used. The sheep have white fleeces, their oxen are large; but the country produces no horses. Camels are the substitute for horses, and perform the [same kind of] labour. They wear no tunics, but have a girdle about the loins, and walk abroad in sandals. The dress of the kings is the same, but the colour is purple.

Some merchandise is altogether imported into the country, others are not altogether imports, especially as some articles are native products, as gold and silver, and many of the aromatics; but brass and iron, purple garments, styrax, saffron, and white cinnamon, pieces of sculpture, paintings, statues, are not to be procured in the country.

They look upon the bodies of the dead as no better than dung, according to the words of Heracleitus, 'dead bodies more fit to be cast out than dung' wherefore they bury even their kings beside dung-heaps. They worship the sun, and construct altar on the top of a house, pouring out libations and burning frankincense upon it every day.

The Nabataean are prudent, and fond of accumulating property. The community fine a person who has diminished his substance, and confer honours on him who has increased it. They have few slaves, and are served for the most part by their relations, or by one another, or each person is his own servant; and this custom extends even to their kings. They eat their meals in companies consisting of 13 persons. Each party is attended by two musicians. But the king gives many entertainments in great buildings. No one drinks more than 11 [appointed] cupfuls, from separate cups, each of gold.

The capital of the Nabataeans is called Petra. It is situated on a spot which is surrounded and fortified by a smooth and level rock (petra), which externally is abrupt and precipitous, but within there are abundant springs of water both for domestic purposes and for watering gardens [...] Athenodorus [...] found many Romans and also many other strangers residing there. He observed that the strangers frequently engaged in litigation, both with one another and with the natives; but the natives had never any dispute amongst themselves and lived together in perfect harmony.