'Brainiac: Science Abuse' - the TV Programme Content from the guide to life, the universe and everything 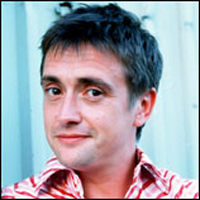 This is Brainiac, the science show that lobs dangerous chemicals around, and then runs like hell.
- Richard Hammond

Brainiac is a British television science programme that’s run by people who have no business running a science programme. The emphasis is on conducting experiments that are just as much fun as they are educational. Okay, so that's a little misleading. In reality, the show is entertainment first, science second (if at all).

It is hosted by Richard Hammond (a presenter on Top Gear) and John Tickle (of Big Brother fame, if you'd call it that). It’s broadcast in the UK, the US, and some European countries.

A favourite pastime of this show is blowing up caravans. One such example of this love comes from the segment called Brainiac Snooker. They had Quinten Hann1 pot the last six balls in an ordinary game of snooker, except that each of the balls triggered a fuse leading to a caravan filled with some type of explosive. The resulting explosion would then blow the caravan apart.

This was followed by Brainiac Golf, where they set up a putting green to do pretty much the same thing.

Another example was an experiment to see if a ringing mobile phone in a petrol station could ignite the station. They did this by filling a caravan with petrol vapour, setting a mobile phone in the caravan and calling it. That didn't work, so they tried it with more mobile phones. It still didn't work. So they came up with another idea: to test if nylon clothes would do the trick. They then got a Brainiac (the name they give to the people who perform, examine and test experiments) in nylon clothing do a silly dance in a bucket and then touch a wire leading to the caravan. Kaboom!

The Quest for an Alternative Form of Propulsion

Later, they tested which type of vehicle would be the best. They fitted a CO2 extinguisher to a skateboard, a pair of roller skates (they modified the tube so it would dispense from the ends of both skates), an office chair (fitted with two fire extinguishers), and a wheelchair (also fitted with two). The wheelchair won.

During the next series, they decided to see how a specially made vehicle designed to be powered by CO2 would fare against the wheelchair. Yet again the wheelchair proved to be the fastest. However, the other vehicle was easier to control, eg, it could travel in a straight line.

Tall vs Small was a segment that pitted a very short person (around 3ft tall) against a very tall person (more than 7ft tall). They put them in several different situations (mostly simulations, but some actual field tests) to see if it’s better to be tall or small in that circumstance. The tests included moving along a crowded pavement.

Fat vs Thin was essentially the same concept, except, that's right, it was a very fat person against a very skinny person. The situations included surviving in a heatwave, being in a blizzard2, and staying afloat.

During the first series, two safe-makers put £200 in the best safe they’d ever made and issued a challenge to Brainiacs that whoever got into the safe could keep the money. Here's a list of what the safe survived:

After none of those worked, they decided to engage the British Army to try to break into it with a Challenger tank. The kinetic energy rounds failed, but a direct hit with a high-explosive round did the trick. Unfortunately, not only did it break open the safe, it also destroyed the £200.

After destroying the safe in the first series, they got their hands on a blackbox flight recorder, which happened to be yellow3, for the second series. It was nearly indestructible. It survived:

The blackbox finally met its match at the wrecking yard.

John Tickle: The Man Who Can Walk on Custard

During the first series, Tickle claimed he could walk on custard, after demonstrating he couldn’t walk on water. So they emptied a swimming pool and filled it with custard. While the Brainiacs were busy doing that, he explained why he could do it. He then demonstrated his theory successfully.

This was probably inspired by the walking-on-custard experiment. They demonstrated things that most4 people can't do with their body.

This was an experiment to show what highly reactive elements (Group 1 aka alkali metals) can really do. First, they put a small amount of rubidium (the third-most reactive alkali metal) in a bathtub full of water and ran into a caravan (surprisingly, it wasn't destroyed previously or during that episode) before the container the rubidium was in dissolved. The results were the equivalent of dropping a grenade into the bathtub.

The next experiment was similar, but instead of rubidium they used an even smaller amount of caesium (the most reactive non-radioactive element) and jumped into a trench seconds before detonation. This was the equivalent of putting a depth charge into the bathtub.

Dear John is a ‘write-in’ segment of the show where people ask Tickle to perform certain experiments. The experiments included: 'How much weight can you lose in two hours?' and 'Can you purify your urine to a drinkable level at home?'

I Can Do Science Me!

Another write-in segment, this is one where viewers offer ideas for experiments they'd like to see performed. It differs from Dear John in that the Brainiac team hunts down the viewer who’s experiment has been accepted and gets them to conduct it. The viewer gets a trophy that states: 'I Can Do Science Me!'

Explosive of the Week

This is a segment where the Brainiac babes blow things up with different explosives and are given a rating out of ten by three judges. This is very appealing to the target audience because it involves things being blown up and scantly clad women.

By viewer request, they started working with thermite in the third series. Thermite is a material that burns at 2,500 degrees Centigrade, and has been around for some time5.

Tina Turner and her Bunsen Burner

Okay, so it isn't really Tina Turner, but that’s not important. This is a segment where they get a Tina Turner impersonator to blow up cars. The source of the flame that leads to the bang is a Bunsen burner, and the flame is delivered to the car in different ways. The explosive is often TNT, because these are supposedly her initials. When the Tina Turner impersonator isn't available, they use a Diana Ross lookalike.

Things You Shouldn't Put in the Microwave

Stop. The following experiment is dangerous. For your safety and the safety of those around you, do not try this at home. No really, don't. - Richard Hammond

This is a segment where they put things into a microwave that they shouldn't. The items include CDs, metal objects, and a gunpowder charge with a small metal wire in it.

This is pretty much self-explanatory: they test to see which fruits float. It’s more or less just an excuse for Rachel Grant (under the moniker professor Myang Lee) to don a bikini.

You Can't Stop Rock 'n' Roll (Actually, You Can)

They take a tape of Twisted Sister's 'You Can't Stop Rock 'n' Roll' and then beg to differ with the aid of such things as caravans, flamethrowers and hammer-throws.

This is a prank segment where a Brainiac puts some paste on various objects. The paste is non-reactive when wet but highly unstable when dry. It only makes a pop, but it's still fun to watch.

This segment generally starts before the commercial break. It shows you a common object, magnified to a high degree. They give you clues and you have until the end of commercial break to guess what it is.

In this segment, they test which common office objects would make the best buoyancy aids during a sudden flood resulting from global warming. Here's some tips that can be taken from this segment: don't grab anything that’s mostly paper, and try to capture air.

Does this really need to be explained? Some uses for urine include a shark decoy6 and a way to cure athletes’ foot.

This is a transitional segment that asks brain-teasers. Most of them are meant to have no specific answer. However, viewers have noted that some have specific answers.

This is one of the segments hosted by 'Doctor Bunhead' in which he performs several science-related tricks in a pub. This part always ends with him getting thrown out of the pub.

The creators of the show have admitted they have faked the results of some experiments. The caesium experiment? As stated by a crew member as to what happened:

It should again be emphasised that the focus is on entertainment first and science second (if at all).

This is just a taste of what Brainiac: Science Abuse has to offer. This entry mostly describes regular segments, and only covers the first few series. They’re still making new ones, but these are good examples of the type of things they do. To summarise: Brainiac: one small anomaly in the science community; one giant piece of an exploded caravan.

1Some pro-snooker player, or something like that.2The results of this one were questionable as the emphasis was put on staying dry using an umbrella, rather than body heat, so the thin person won.3This is actually the way they all are, because yellow is more visible than black.4 Many viewers sent in pictures of people licking their own elbow after the programme said no-one could do it. They begged viewers to stop sending in photographs and admitted their mistake.5US Army Rangers used thermite to disable coastal guns during the D-Day invasion in World War II.6Urine is a by-product of blood and can be used to lure the shark away.