Thermit Reaction Content from the guide to life, the universe and everything 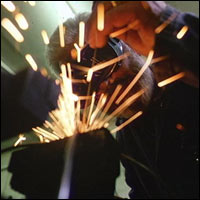 The thermit (or thermite) reaction is the name given to a series of displacement1 reactions between powdered aluminium and various oxides or sulphides of metals that are below aluminium in the reactivity series of metals.

The name thermit is also given to the reaction mixtures themselves.

The ability of finely-divided aluminium to reduce certain metal oxides, with the evolution of sufficient heat to melt both the metal and the alumina produced, was noted by both Sainte-Claire Deville and Wöhler soon after the first isolation of aluminium by Wöhler in 1827.

In 1886 Héroult and Hall independently devised the electrolytic process for the extraction of aluminium from bauxite; a process which superseded the expensive sodium reduction process and which provided a quantum leap in the economics of aluminium supply.

In a thermite reaction, a metallic compound is reduced by one of several metals or metallic alloys in such a way that when the mixture is ignited at one place, the reaction continues of its own accord, so that under complete oxidation of the reducing element, a fluid slag is formed, while the reduced metal is obtained as a homogeneous uniform regulus; if the oxide is used in excess, the reduced metal is free, or practically free, from the element used as a reducing agent.

In addition, Goldschmidt devised the means of initiating the reaction using a fuse, instead of heating the mixture until ignition took place. He also devised the equipment necessary to produce molten iron or steel for the in situ  welding and repair of rails and machine parts; and for many years these have been a familiar sight on our railway systems.

Indeed, the most familiar of the thermit reactions is the reaction between iron(III) oxide and aluminium, where the oxide is reduced to the metal and the aluminium is oxidised to aluminium oxide. A temperature of about 3,000°C is attained and so the iron is obtained in molten form. Industrially, this is recovered and used for the welding together of steel railway lines in situ, for repairing defective castings, and in incendiary bombs. The process is also useful in the extraction of certain metals from their ores.

To Demonstrate this Reaction:

...if any simple demonstration reveals the awesome power of chemistry, this one does.
- John Emsley

1Metal displacement reactions are said to occur when a metal displaces (ie, takes the place of) a less reactive metal in a metal compound. A familiar example occurs when an iron nail is placed into copper(II) sulphate solution. Copper(II) sulphate is blue; iron(II) sulphate, which is produced in the reaction, is a pale yellowish green. During the reaction the blue solution loses its colour as copper(II) ions are replaced by Fe(II) ions; and the iron metal is seen to turn pink-brown as the displaced copper becomes deposited on it.2It is important that the thermite reactants are perfectly dry otherwise extremely hot material might be violently ejected from the crucible. The components should be dried separately at about 125°C in a drying cabinet. Alternatively, a desiccant may be used.3CLEAPSS is the Consortium of Local Education Authorities for the Provision of Science Services (in schools, UK).4'Hazcards' are a set of A5 index cards, covering chemical hazards in science up to A-level, for secondary schools and colleges in the UK. Where appropriate, methods of disposal, dealing with spills and other accidents and first aid are also covered.