John Bird MBE - Humanitarian and Activist Content from the guide to life, the universe and everything 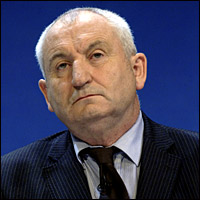 In 1946, one John Bird, now famous for being the co-founder of The Big Issue, made his way into the world.

I had incredible delusions of grandeur as a boy. I dreamt big dreams. Perhaps that comes from being destitute as a five-year-old.
- John Bird

Born in Notting Hill, London, to a London Irish family, as a child Bird experienced his family being constantly evicted as they were unable to pay the rent. At one point they lived in the attic of his grandmother's flat for a year. At the age of seven he lived in a Catholic orphanage, and at the age of ten he had taken to committing crimes such as shoplifting, housebreaking, vandalising property; he consequently ended up in jail a number of times.

At the age of 21 Bird was living in Edinburgh, Scotland, and trying to evade the police when he met Gordon Roddick1. In an interview with The Daily Telegraph, Bird reveals how he felt about meeting him:

He was the first person I ever met who took me seriously and didn't chastise me for my big mouth, aggression, drunkenness and stupidity. Gradually I met people who saw another side to me and I began to change.

By 1991, Bird had become a printer, was running a small business, and had fathered three children. He was also reunited with Roddick, who told him about a newspaper being sold on the streets of an American city by homeless people. Roddick offered Bird £30,000 towards setting up a similar initiative in Britain. The magazine became known as The Big Issue, an entertainment and current-affairs magazine sold by people who have become homeless and are trying to turn their lives around. The articles within the magazine are written by professional journalists, but Bird has always hankered after training homeless writers. Eighteen months after the launch of the magazine the company broke even, and today £10m is generated from annual sales. Half of the sale price goes directly to homeless people. The Big Issue has become so successful that it is now sold in Japan, USA, South Africa and Australia.

The Big Issue was controversial at the time. The idea that homeless people could make decisions for themselves was an unusual mind-set for most charities, and we did run into a lot of opposition. But we were very thorough and kept it simple. We said: 'Look, you buy this paper for 10 pence and sell it for 50 pence and then you make a living out of it'. And it's been a huge success.
- Bird

In 1995, Bird was awarded an MBE for 'services to homeless people' and set up The Big Issue Foundation in order to help the people selling the magazine to keep their lives on track and not return to living on the streets. The foundation also examined ways that people became homeless and tried to address these issues. For example, it advises people who suffer from addiction and mental health problems where they can find help; and talks to people in prisons about their future, suggesting ways in which they can find accommodation after their incarceration is over.

Being an entrepreneur appears to run in Bird's family - as his daughter Diana has proved first through stuffing envelopes for the Nicaragua Solidarity Campaign, managing The Big Issue USA, and then running her own catering business called Lady Bird's Kitchen. It was through catering that Diana noticed that local businesses were struggling to survive, and in order to help them she joined forces with her dad in 2006. Together they founded the Wedge Card, which helps local and independent stores remain independent, while offering shoppers special offers such as 'buy one get one free' deals in return for using it. In this way Bird hopes to do his bit to stop supermarkets from crowding local retailers out of the retail landscape.

I'm totally opposed to the 'supermarketisation' of the land. Our local shops are disappearing in front of us, the high streets have turned into monstrous clones, and it's destroying our communities.

In June 2007, Bird decided that he would stand for mayor of London and launched a campaign to help him do that. He believed that London was made up of two halves - or, as he put it, the tale of two cities with the rich living alongside the poor - and he wanted there to be more equality.

I'm going to move the GLA down and dirty into the boroughs, into the ghettos and break the despicable tale of two cities that we have. We have all the big businesses and then we have people living in poverty.

Later in 2007 he had changed his mind and stepped away from his decision to try and become London's mayor, opting instead for a social movement towards eradicating poverty.

1Gordon Roddick was married to Anita Roddick who founded The Body Shop.