Dame Anita Roddick - Founder of The Body Shop Content from the guide to life, the universe and everything 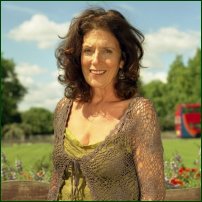 She campaigned for green issues for many years before it became fashionable to do so and inspired millions to the cause by bringing sustainable products to a mass market. She will be remembered not only as a great campaigner but also as a great entrepreneur.
- Gordon Brown, UK Prime Minister, 2007

Dame1 Anita Roddick 'was a great environmentalist, ethical businesswoman, and campaigner for human rights worldwide' said Simon Hughes, Liberal Democrat President. She founded a pioneering company based on these values called The Body Shop and wrote numerous books during her lifetime. According to The Times, she was instantly recognisable due to her 'Latin looks, famous bird's nest hair, legendary energy, outspoken views and unorthodox dress sense — which manifested itself in a fondness for laddered tights and Doc Marten boots — she was a marketing man's dream come true'. Two people who were lucky enough to work alongside her were Charles Gore, Chief Executive of the Hepatitis C Trust, who said: 'Working with her was so joyful. The great thing about Anita was that she took all her causes incredibly seriously but she never took herself seriously, which made her really fun to be with', and Justin Francis, a colleague at The Body Shop, who felt 'She had a great passion for life, a great passion for business and for people. She was very warm, very witty and very clever'.

Anita Lucia Perilli was born in Littlehampton, West Sussex on 23 October, 1942 to a Jewish-Italian immigrant couple. She had a brother and two sisters. When she was nine, her parents split up and her mother married her former partner's cousin Henry. A couple of years later Henry died of tuberculosis. At the age of 18 Anita learnt that Henry was her real father.

She attended St Joseph's Convent, Littlehampton, where she found herself to be a 'natural outsider'. She idolised James Dean and when she was ten began to find injustices in the world, through reading about the Holocaust. She furthered her education at Maude Allen Secondary Modern. She was passionate about drama and tried for a place at the Central School of Speech and Drama but was turned down. She then turned her focus on teaching and obtained a place at Newton Park College of Higher Education in Bath. After qualifying as a teacher she returned to Maude Allen Secondary Modern to teach English and history, but this was short-lived as an educational opportunity on a kibbutz in Israel arose and soon she was working her way around the world instead.

On returning home during the 1960s, Anita met Gordon Roddick in her mother's nightclub. Soon Anita and Gordon were a couple and after the birth of their first daughter Justine, they travelled to Reno in 1970 where they got married. They then spent many years travelling and during their travels gained knowledge of the global market with which they would later work. When they returned to Littlehampton they opened a bed-and-breakfast business and restaurant called Paddington's, which helped them gain knowledge in running a business. Then after the birth of their second daughter, Samantha, in 1971, Anita's husband declared that he wanted to fulfil a childhood dream of riding a horse from Buenos Aires to New York.

Nobody talks of entrepreneurship as survival, but that's exactly what it is and what nurtures creative thinking. Running that first shop taught me business is not financial science, it's about trading: buying and selling. It's about creating a product or service so good that people will pay for it.
- Anita Roddick

Despite the journey taking two years to complete and the children having no father figure close by during those years, Anita accepted his wish. In return he helped her to negotiate a £4,000 bank loan to start up a business that would bring income for herself and her daughters to live off. Anita had a few ideas with the most prominent of these being The Body Shop. Her first store opened in Brighton on 26 March, 1976. Initially just 15 different naturally based skin and hair products were sold in the shop. These drew on inspiration from women's beauty rituals from around the world and her mother's experience of living during World War II. Anita had no training or business experience in cosmetics but this didn't deter her from being successful and bringing home sales of £300 a week. Six months later Anita made negotiations with a garage owner called Ian McGlinn who in return for a slice of the business was willing to give up his garage to the company. Towards the end of the 1970s the business was not just a local phenomenon but a worldwide one too, with the first franchise opening abroad in Brussels, Belgium during 1978.

The Body Shop was successful because:

These aspects led to direct rivalry between themselves and department stores worldwide. When her husband came home from America he helped launch several more shops and developed the business structure of the company.

Billboards for the Green Queen

Anita carried out campaigns on so many issues, and often issues that were not popular by the mass of public and [which] took some strength of character to become involved in.
- Emma Colyer from the HIV and AIDS charity Body and Soul

Anita soon realised that her shops could do far more than sell environmentally friendly products; they could also act as billboards to create awareness of other societal injustices in the world. So in 1985 The Body Shop helped create awareness of the charity Greenpeace and that following year raised awareness of the Greenpeace project 'Save the Whale'. Since then Anita's company has supported other causes such as Amnesty International, Friends of the Earth, Shelter and CND. She also helped in the plight of Third World debt relief and the homeless. In 1990 she supported John Bird founder of the Big Issue magazine and created the charity Children on the Edge, which helps children in eastern Europe and Asia deal with conflicts, disabilities and HIV/AIDS.

However, her opposition to the World Trade Organisation, Gulf War and relationship with bankers in the 1990s had a dramatic affect on her business and led to it struggling financially. Trading problems with America also occurred and The Body Shop's ethics were attacked which had a great impact on its share price. Other cosmetic shops also competed with her business leading to a drop in sales of The Body Shop products. Despite this blow to the business, in 2004 Anita wrote on her website2, '28 years on, The Body Shop is a multi-local business with over 1,980 stores serving over 77 million customers in 50 different markets in 25 different languages and across 12 time zones. And I haven't a clue how we got here!'.

We have always had great respect for The Body Shop's success and for the strong identity and values created by its outstanding founder, Dame Anita Roddick. A partnership between our companies makes perfect sense.
- L'Oreal's chairman Sir Lindsay Owen-Jones

Then in July 2006 The Body Shop was taken over by French cosmetics company L'Oréal for £652 million. L'Oreal were determined that The Body Shop should remain independently run, Anita should keep her job as a consultant and that the The Body Shop headquarters should remain in Littlehampton. The take-over caused controversy among the fans of the shop who believed that L'Oreal was against the founding principles of The Body Shop. However, Anita and her family, who were believed to have gained a personal fortune of £130m, were happy that L'Oreal had taken The Body Shop on. Anita said, 'For both Gordon and I, this is without doubt the best 30th anniversary gift The Body Shop could have received'.

I want to blow the whistle on the fact that Hep C must be taken seriously as a public health challenge and must get the attention and resources that it needs.
- Anita Roddick

Meanwhile, Anita had discovered that she had contracted Hepatitis C from an infected blood transfusion during the birth of her second daughter. Later she also suffered from cirrhosis of the liver which is caused by Hepatitis C. 'It's a bit of a bummer... I had no idea I had this virus. I was having routine blood tests when it showed up.' At first she had no symptoms but as the years passed she could not hide the fact that she was ill and she publicly announced her illness in 2007. After discovering her condition, Anita became the patron of the Hepatitis C Trust and continued supporting a number of other charities. She died in St Richard's Hospital in Chichester, West Sussex, from an unexpected brain haemorrhage on 10 September, 2007. Councillors in Brighton and Hove have agreed that as a tribute to Anita, a commemorative blue plaque will be placed at the site of her first Body Shop store.

1Anita became a dame in 20032Anita's website www.AnitaRoddick.com was launched in 2001.