Trier, Rheno-Palatinate: A Small Town in Germany Content from the guide to life, the universe and everything 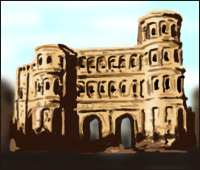 John le Carré may have been referring to Bonn when he wrote his spy novel A Small Town in Germany, but it is also a fitting description for Germany's oldest city, Trier.

Trier is in fact a Roman city, starting off as little more than a wooden bridge across the river Moselle in 18 BC. Because it was founded under Caesar Augustus in the area of the Celtic Treveri, it was called Augusta Treverorum, later shortened to Treveri. The French name for the city is still Treves, an important fact to bear in mind if you are planning to drive to this charming place. The Romans built a city wall which had 5 gates, around 180 AD. One of these gates, the Porta Nigra, remains almost perfectly preserved to this day, and remains of 2 others can still be seen.

In 275, the city was destroyed by the Germanic Alamanni, but rose to greatness again after 293 as one of the 3 capitals of the Western Roman Empire1. The city suffered destruction first at the hands of the Franks, and then in 882 the Vikings.

In the 12th Century, the Archbishops of Trier had substantial powers, and became Prince Electors. The city flourished as a commercial and cultural centre, while successive archbishops became involved in the ongoing struggles between Pope and Emperor. By the mid 16th Century, Lutheranism was the recognised religion of most of northern and central Germany, but The Reformation didn't catch on in Trier. In the second half of the 16th Century, witch persecutions reached their height, and one of the most vehement took place in Trier.

From the Thirty Years War in the 17th Century, the city's key position between Germany and France led to a series of sieges, occupations and destructions, and it was taken by the French in 1794 after the Revolution. When the Prussians took Trier after Napoleon's defeat in 1815, the city was poor and isolated. This made it an ideal ground for Karl Marx, born here in 1818, to formulate his ideology on the living conditions of working people, later to become the tenets of Communism. His birthplace is now a museum.

During the First World War the city was bombed fifty times, and afterwards became a French garrison city, under the command of young Major Charles de Gaulle. The city formed part of the arena of The Battle of The Bulge. General George Patton was advancing towards Trier in February 1945, when he was given instructions to bypass Trier, as it was thought that 4 divisions would be needed to capture it. Patton replied:

Have taken Trier with 2 divisions. What do you want me to do - give it back?

The Second World War destroyed 40 percent of the city, and the subsequent rebuilding has been careful to preserve the architectural gems which were spared.

Today Trier is a University city2 of 100,000 inhabitants, a mecca for shoppers from Luxembourg, France and Belgium, and a draw for tourists keen to visit the many Roman remains, as well as the holy coat of Treves.

Trier is situated on the Moselle river, on the Western border of Germany. The river valley is quite steep at this point, and the cliffs are an unusual red colour, which all lends itself to giving the city a stunning and striking visage. Access is easy via the autobahn, or by train. The main train station is within walking distance of the city centre. Buses around the city are frequent and well-signposted.

Trier is an absolute treasure-trove of Roman architecture and remains. One of the first places the visitor will see is the Porta Nigra (black gate), said to be the best preserved Roman city gate north of the Alps. It is located right beside the tourist office, and marks one end of the pedestrian zone. There is a large car park under the hotel just opposite it, with pedestrian subways connecting to the gate itself. The subways are full of street traders selling tacky souvenirs. The gate itself (called black because of the colouring of the sandstone blocks from which it is constructed) extends to 3 storeys high, and is in remarkably good condition. It is possible (for a few euros) to explore it all the way to the top. But even just walking through or under it is a breath-taking experience.

Trier also boasts an amphitheatre, scene of bloody gladiatorial combats from the past. Although the stone seats have been removed, the acoustics are still wonderful, and it is often used as a concert venue, holding up to 20,000 spectators. Underneath the arena, visitors can explore the cellar, where prisoners and animals were kept before a movable platform carried them up into the arena for their fight.

All of these sights are on the UNESCO list of World Culture Heritage of Mankind.

The Gospels in the New Testament describe the events surrounding the crucifixion of Jesus Christ. They tell that he wore a coat that was woven with no seam, and that after he had been stripped and put on the cross, the Roman soldiers drew lots for this valuable coat. What happened to it after that is not known for certain, but legend has it that Saint Helena brought it to the city in the 4th Century, where it now resides in the Dom3, with the status of a Holy Relic. A shrine dedicated to the coat is much visited by both curious tourists and devoted, prayerful believers. The Dom itself is one of the largest of all dual church buildings of early Christian architecture, and comprises The Church of Our Lady (Liebfrauenkirche) and St Peter's Cathedral (Dom).

Plenty of vineyards abound on the River Moselle, and there are 3 million vines within the municipal boundary. Good to nibble on while strolling down the main street are salty Bretzels. The market square contains a permanent wine tent, selling local wines which one can sip while enjoying the colour and atmosphere of the market.

Detailed maps of the city, as well as an up-to-date calendar of events, can be found on the website of the city.

1Along with York and Milan.2The first University in Trier was founded in 1473, although it closed in 1797, and another was not opened until 1970.3Cathedral.