Burma-Shave - an American Advertising Legend Content from the guide to life, the universe and everything 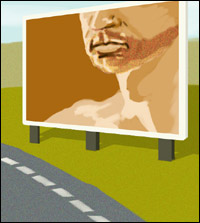 The Beginnings of Outdoor Advertising

Advertising outdoors has its advantages. One advertisement will be seen by thousands of people. Many of these will be locals who will see the advertisement regularly, firmly lodging the product or service into the minds of potential customers. The rest will be out-of-town travellers who would not normally be aware of the proximity of the product or service, should they have need of it.

Although advertising agencies have existed since the mid-1800s, most outdoor advertising was still done on a local basis by individual shop-owners up until the early 1900s. Advertisements were painted on the walls of buildings, on the sides of bridges or on nearly any large, flat surface. Standardising the size of billboards to accommodate a fixed number of bills (or a specific size of advertisement) made that option more appealing to major national companies like Coca Cola, who could print them to display in several areas of the country and be sure they would all fit in the allotted spaces.

With the introduction of the car at the turn of the century, and the rise of its popularity after the First World War, more people were out on the roads, making outdoor advertising more important than ever before.

A Legend is Born

Burma-Shave was a brushless shaving cream made by the Odell family of Minnesota beginning in the 1920s. After the failure of their previous product, Burma-Vita, a linament for the ill, the Odells wanted to produce a product with a wider consumer appeal. Inspired by Lloyd's Euxesis, the original brushless shaving cream distributed worldwide from England, they settled on Burma-Shave.

Burma-Shave was not an immediate success, suffering from limited distribution and almost no advertising. The younger Odell, Allan, charged with the task of selling the product, wanted to try making signs to put up along the roads he travelled on his sales route; but his father, Clinton, was set against the idea. After much persistence, Clinton finally gave in and allowed the purchase of some second-hand boards with which to make signs.

The boards were cut into three-foot lengths, painted red and lettered in white. Each board had one line about the product and usually about four signs placed along the road in succession would make up the advertisement. An early set of signs would say something like this:

The first set of signs went up along Highway 35 in Minnesota in 1925. They were a success, leading to an expansion of the campaign. Signs were quickly going up in neighbouring states.

A Part of Americana

There's only so much you can say about any particular product, and the Odells were soon casting about for something more original. It wasn't long before the signs started featuring rhymes.

Sales multiplied and the signs were popping up everywhere. As the signs appeared alongside more highways across the nation, they became embedded in the early American roadside culture, just like motels and greasy spoons. Families on road trips made a game of spotting the signs and reading them out. To optimise advertising space, often the signs featured slogans on both sides to catch the attentions of travellers going in opposite directions. There would be different rhymes on each side, and it was the job of the kids in the back seat of the car to look out the back window and read the rhyme that couldn't be seen from the front.

The Burma-Shave sign campaign was so successful that the company didn't feel any effects of the Great Depression. They opened up competition to their customers to come up with jingles for their signs, awarding $100 each for successful entries.

Others were just for the fun of it:

Never underestimate the enthusiasm (or gullibility) of your target audience. Catching the wave of advertisers promoting their products with coupons or other special offers, the Burma-Shave folks raised a set of signs advertising a free half-pound jar to anyone who sent in the fender off their car. Perhaps not surprisingly, they netted quite a selection of car fenders.

Another outlandish promotion offered a trip to Mars for 900 empty jars. Feeling pretty safe with such a promotion you can imagine their surprise at receiving 900 empty jars from a store manager. Not to be caught out, Burma-Shave sent the man to Mars - Moers, Germany, that is (which is pronounced roughly the same) - and got quite a bit of publicity for it, too.

More Than Just Another Shaving Cream

The misconceptions of youth combined with the inspiration of the 1949 film They Live By Night led to the Tom Waits song 'Burma-Shave' in the 1970s. As a child seeing Burma-Shave signs along the road while on road trips with his family, Tom always thought Burma-Shave was a town. In his song it's the town his They Live By Night-inspired characters were trying to get to. But the musical aspirations of Burma-Shave don't end there!

In 1984 in Holland a group of men got together to form a band. Influenced by new wave and 80s pop music, and inspired by the song by Tom Waits, the musical incarnation Burma-Shave was born.

Throughout the nearly 40-year campaign there were in total at least 600 slogans on more than 7,000 sets of signs. The signs appeared in all but four of the contiguous states.1 The company maintained all of its signs with its own road crew in eight trucks around the country. The road crew changed the slogans about once a year and kept them in good repair.

Cars got faster, roads bigger and safer, letting cars go even faster. At first it was enough to space the signs further apart. Then came the super highways, and bigger and bigger billboards. By the early 1960s Burma-Shave's sign campaign was nearly obsolete.

In 1963 the Odell family finally sold Burma-Shave to the Phillip Morris Company, who marketed the product with their American Safety Razor line. The large corporation didn't feel the small red signs would be as effective as other means of advertising such as television, and discontinued the campaign. By the end of 1963 all of the signs had been removed. As it wasn't performing as well as some of the company's other products, Burma-Shave was discontinued in 1966.

Burma-Shave was re-introduced in 1997. The new, updated line of Burma-Shave products includes razors and blades and, ironically, shaving soap and brushes - but no shaving cream.

One of the last remaining sets of Burma-Shave signs now rests in the Smithsonian Institution in Washington DC. Perhaps appropriately, they read:

1It is rumoured that during the war homesick GIs planted signs overseas as well.