The Ten Commandments Content from the guide to life, the universe and everything 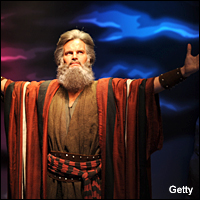 It's generally not a good idea to just dive into the Bible and start reading out of context - you can get yourself into all sorts of trouble. There's an urban myth about a guy who wanted to hear something from God so he decided to open his Bible at a random page, close his eyes, stab with his finger, and (after opening his eyes again) read whatever verse he'd pointed at. The verse was this:

Then he went away and hanged himself.1

Deciding to have another go, he opened the Bible, closed his eyes, stabbed his finger, opened his eyes, and read:

Jesus told him, 'Go and do likewise.'2

Clearly the bible is a daunting book and - urban myth or not - readers aren't going to get the most out of it by just picking out verses, or even whole chapters, at random. So, before we just dive into Exodus 20 willy-nilly3, we should understand where we're up to.

The Story so Far

In the beginning, God created the heavens and the earth. It was good. Then he created Adam and Eve, gave them free will, and found that they promptly did wrong. God, being only good, was at odds with this wrong4. However, God still loved mankind - even though mankind continued to behave badly - and chased people through history, liberating the Israelites from captivity in Egypt. We now find the Israelites wandering through the desert on their way to the promised land, in need of some direction. 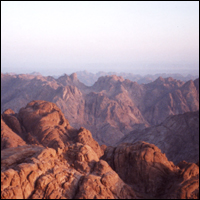 Moses is leading the Israelites, and God has said he'll meet him at the top of Mount Sinai for a conference. We aren't talking complementary drinks and PowerPoint presentations here. There'll be pyrotechnics, though. God is going to meet with Moses in a cloud of smoke and fire, and will be speaking very loud so that the people will hear. As every good conference speaker knows, you start by telling your audience who you are and what qualifies you to have their attention. God says this:

I am the LORD your God, who brought you out of Egypt, out of the land of slavery.5

Well, would have got their attention.

(The following numbering applies to the Protestant Ten Commandments. In Catholic Doctrine the first two are counted together and all the others appropriately re-numbered; the tenth is split into two.)

You shall have no other gods before me.6

This really is the crux of God's relationship with man. How can God really get to know man on an intimate level if man is so intent on letting things get in the way? Man would argue that these things just creep up on him.7

You shall not make for yourself an idol in the form of anything in heaven above or on the earth beneath or in the waters below. You shall not bow down to them or worship them.8

Similar to the first commandment, this is about not putting other things in the way. Yes, God might be in all of creation, but worshipping creation itself is missing the point. Creation points at God, just as a signpost points at - say - Islington. Worshipping creation would be like making your way to the foot of the signpost, rather than down the Holloway Road, round Highbury Corner and down Upper Street, until you get there.

You shall not misuse the name of the LORD your God.9

This isn't just about swearing. This is about a spoken manner that comes - ideally10 - from an underlying attitude of respect for God.

Remember the Sabbath day by keeping it holy... On it you shall not do any work.11

This has got nothing to do with going to church. Back in Moses' day there was no such thing as 'church'. This is a good bit of advice about making time - taking a day off to concentrate on the important things, like the first commandment.

Honour your father and your mother.12

You shall not murder.13

Hands up if you agree with this one? That's all of us, then. Elsewhere, the Bible says that the law is written on our hearts - the implication being that we don't have to know the Old Testament off-by-heart to appreciate the difference between right and wrong.

You shall not commit adultery.14

Again, this is about respect for others - this time over and above our own desires.

You shall not steal.15

You shall not give false testimony against your neighbour.16

This might specifically cover lying, but really God is reinforcing the 'respect for others' line of the previous handful of commandments. The idea here is to do the right thing, and also not to lie about it or blame others if you get it wrong.

By the tenth commandment, God has covered all the bases. God doesn't want man damaging his relationship with God, or with his fellow man. Not only that, there should be no thinking about it either.

So God has finished his conference on Mount Sinai. The smoke, fire, thunder and lightning has frightened most of the audience, and they suggest that Moses continue this dialogue while they stay at the bottom of the mountain and keep an eye on their sheep. God suggests that he give a copy of his keynote speech to Moses, and so writes the commandments on tablets of stone. When Moses gets back he finds that the Israelites aren't keeping an eye on the sheep after all, but are instead making some idols to worship! Well, that's commandments one and two broken already...

Ah, but what about the promises? Well, if Jesus is to be believed, God didn't intend for the commandments to tie everyone up in knots with a bunch of rules that were there to be broken. Well over 1,000 years after Moses went up Mount Sinai, the teachers of the law had a good line going in guilt. People, it seemed, were bound by the law, and Jesus was purporting to fulfil the law and do away with legalism of it all: he would take the blame for it all. In an attempt to trick Jesus, one of the teachers of the law asked him:

Which is the greatest commandment in the Law?18

To which he deftly replied:

And that, in a nutshell, is it. Love God. Love everyone else. Simple.