The Rex Cinema - Berkhamsted Content from the guide to life, the universe and everything 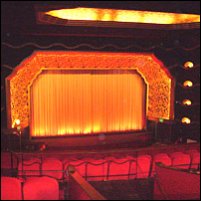 Once upon a time in 21st Century Hertfordshire, one man did a very unusual thing. While some people dream of opening their own restaurant or bar, he opened his own cinema. But cinemas are owned by corporations, not individuals, you say? Well, not in Berkhamsted, where the Rex Cinema is laying claim to the accolade of 'the best little cinema in Britain'.

Berkhamsted's Rex dates back to the 1930s. An art deco gem designed by David Nye in 1936 and opened in 1938, it had a chequered life. Despite boasting a beautiful auditorium with a marine theme (complete with lights concealed behind scallop shells on lines of waves) and a richly ornate proscenium arch, the Rex fell upon hard times in the 1970s.

In 1973 it was renamed the Studio and adapted for bingo half the week, films the other half. In 1976 it was partitioned off to form two pokey cinemas named Rex 1 and 2, seating 263 and 163. In 1988, The Rex closed its doors, seemingly for good... and then began a sad but interesting chapter in its history.

Over the next 16 years the building sank to a sorry state - unused, vandalised and under constant threat. Demolition dates came and went, but the Rex's Grade II listed status and the watchful eye of English Heritage prevented it from being torn down altogether. This, however, was the ultimate aim of developers. They wanted to convert this prime piece of real estate (which included 1930s flats and a car park as well as the cinema) on Berkhamsted's busy, prosperous High Street into modern luxury flats, offices or a conference centre.

By the early 1990s, a Friends of the Rex group was up and running, and one James Hannaway joined the campaign in 1994. This was to be a fateful moment in the life of the Rex. Hannaway, a local journalist, had previously run a children's art centre in neighbouring Hemel Hempstead. He threw his weight in with the other groups campaigning to save the building and restore it to life - groups like the University of the Third Age, councillors, the local film society, the amateur dramatics society.

But ultimately, committee structure was not for Hannaway. 'When storage space was mentioned for the Scouts,' he said, 'that's when I left the group. I then started to tackle stuff on my own.'

It was a waiting game, but Hannaway's break - and the Rex's - finally came in 1998. Nicholas King Homes put in its third application to convert the Rex into housing. Previous applications had all foundered on the requirement that the cinema space be fully restored, and Hannaway knew that the strong listing English Heritage had slapped on the cinema was his secret weapon.

Fearing the council were considering delisting the site, Hannaway decided to approach the developers about a joint project. Easier said than done. His previous calls to developers were met with no response, so Hannaway realised he'd have to be resourceful. He put in a fictitous £1 million bid to the land agent for the cinema. 'I didn't have a penny, but the developers called back within an hour,' he said.

He persuaded Nicholas King to reduce the number of apartments in their plan and to restore of the cinema - with Hannaway as the cinema operator. This was the 'dream ticket' that finally saw planning application granted, despite opposition from the Friends of the Rex group.

Hannaway describes the council meeting where the issue was decided: 'When they [Friends of the Rex] spoke, everybody cheered them on. But then I spoke up just for the chance to open the cinema no matter who developed it. Isn't that what we all wanted?' said Hannaway.

Under the new plans, the former car park and original flats were released for housing. The cinema's old foyer was partitioned off and sub-let as a restaurant (now The Gatsby), while the fabulous original auditorium was to be restored and reopened as the new Rex cinema.

The journey from planning permission to completion wasn't easy. The Rex needed a new roof; restored drainage, electrical and water access; repair to the fabric of the building; and restoration of the heavy original art deco features and plasterwork. And of course, a complete refit of the interior.

The developers had to restore the cinema, but they didn't have to provide amenities. So for example Nicholas King Homes put in radiators, but it was up to Hannaway and his team to supply water, drainage and electricity. As much as they could, Hannaway's team 'piggy-backed' off the developers, doing things like using their scaffolding to install the Rex's cabling. Hannaway's team got their hands dirty, doing carpentry and concreting themselves, and a group of people with design and building skills was assembled, rather than relying on professionals brought in by a contractor.

Money was always a problem. 'Banks wouldn't touch us because cinemas were closing all over the place. Why should they fund us?' said Hannaway. 'We never went near the Lottery. So we came up with local loan schemes. People would put in money and we'd pay them back with interest. Others sponsored seats. We opened up membership and found more financing through local business.'

In late 2004, the curtain finally went up on the renovated Rex cinema. The lovingly restored art-deco interior, spacious leg-room (every other row had been removed) and 294 super-deluxe seats sourced from Amsterdam, prompted Jasper Rees, writing in the Daily Telegraph, to call it 'the cinematic equivalent of turning left on a long-haul flight'. Walking through the Rex's discreet side-street entrance1 was like stepping 'instantly back into the golden age of film,' he added.

Instead of popcorn and Coca-cola, Rex patrons quaff decent house wines and nibble on cheese-and-biscuit platters. The circle has retained traditional theatre seating, but downstairs has cocktail seating with swivel armchairs arranged around small tables, and its own bar with waitress service. Tickets to see a film in all this ambience are £7 (circle) and £9 (tables).

The Rex's programme is a mix of populist and serious films, with big releases like The Bourne Ultimatum (September 2007) showing a couple of weeks after national release, interspersed with older classics like IL Postino (1994) and newer foreign-language films like Molière (2006) and the more art-house Daratt (2006).

Film selection seems largely personal, decided on by James Hannaway and his staff, with popular demand also swaying scheduling decisions. At one point, Motorcycle Diaries was screened once a month, because the Rex team thought it was a film everyone should see. Each film is introduced by an announcer on stage - usually James Hannaway - but sometimes by the likes of Terry Jones, as was the case for the screening of Monty Python's Life of Brian.

Big names like Dame Judi Dench, Charles Dance, and director Mike Leigh have also held question-and-answer sessions there after their films. And what other local cinema would have been offered the UK premiere of George Clooney's Good Night and Good Luck?

Not bad for a cinema whose only value once seemed to be as a bit of real estate. In fact, Berkhamsted's estate agents now use the Rex as one of the selling points of the area - drawing angry comments from Mr Hannaway in the cinema's monthly programme, as he dislikes seeing his business used to seemingly boost estate agents' profit margins.

Today the Rex frequently has sold-out houses for evening showings. Extra matinees and an 'advanced-booking list' (with a hefty £150 price-tag on membership) have been introduced to ease the pressure for seats. It's not unknown to queue for over an hour on the first day that tickets for each month's films go on sale. The cinema is paying its way, and owner James Hannaway is still in evidence at every show, in his trademark linen suit.

Writing on the blog, What Fettle, cinemagoer Neil Coppard says: 'If anything restores one's faith in the goodness of human nature and a belief in altruism, then the Rex has to be at the top of the list' Other posts say things like: 'I live about a stone's throw away and count myself lucky,' and 'I have been raving about the Rex to anyone who would listen.'

Restoring the Rex building to its former glory was only part of the battle. James Hannaway has established a thriving independent cinema in Hertfordshire that turns a night at the movies into so much more than the multiplex experience offers. 'Because we're fully independent, we can try anything out,' he told the BBC's Action Network. 'We want people to walk into the building and be treated to the time of their lives.'

And they are. Now the Rex has to cope with its popularity. The cries of 'it won't work' have been replaced by 'you can't get in'. The cinema's new challenge is to find ways to deal with the demand for tickets, so customers who get turned away from the Rex's sold-out houses don't stay away for good. And James Hannaway is currently looking at rescuing another down-on-its-luck cinema, in nearby St Albans. Perhaps with the Rex, he's found a formula for cinematic success that can be repeated.

1The Gatsby restaurant and the development's flats occupy the Berkhamsted High Street frontage - the entrance to the Rex is around the side, on Three Close Lane.