Dog Training using a 'Magic Dog Bottle' Content from the guide to life, the universe and everything 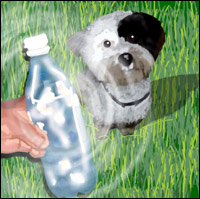 Once in a while you come across something and you think, 'I wish I'd known about that sooner.'

Dog-training is based on rewarding good behaviour (positive reinforcement) and this is often related to giving food to the dog. Good trainers tell you to reduce the dog's calorie intake at meals to stop them becoming overweight as a result of ample treats. Sometimes dogs develop bad habits - mainly down to humans allowing or encouraging them and once bad habits are acquired, altering them can be difficult.

I took on a mature dog, which had been a 'rescued' dog at some point in its past. This posed many challenges and a decision was made to take her to a formal training course even though she was about five years old. On the first night the trainer introduced the concept of the 'magic bottle', a noise-maker. The bottle was used during the course of the night to deal with ingrained bad habits while generous rewards were used to increase new, good habits.

How to Use the Bottle

The way to use the bottle is to shake it hard, once, at the instant the dog does something you want it to stop. This causes the dog to be startled by the loud noise and the dog associates that behaviour with an unpleasant experience if you repeat it every time. This is known as negative reinforcement, or 'aversive training'.

It was used, by the trainer, with a dog that kept jumping up and for others that snarled or showed aggression. There was no violence involved but it was clear that none of the dogs liked it.

Carrying such a bottle1 when out for a walk with the dog can sort out a range of problems.

It is recommended that this technique is not used without expert advice. Some dogs are very nervous, or have very sensitive hearing, and rattling a bottle close to their ears can traumatise them.

How to Make One

The best thing about this device is that you can make one from the litter that is left lying around when you are out walking - so you can soon have one even if you forgot to bring one with you. Take an empty plastic bottle and put a handful of small pebbles or gravel in it. Replace the cap and there you have it.

1A 500ml drinks bottle is quite adequate and can be kept in an outer coat pocket.