Training Rewards for Dogs Content from the guide to life, the universe and everything 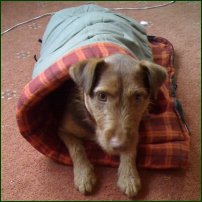 With today's love affair with reward based training techniques, it can be hard to find the right reward. Food is the usual choice, but with obesity nearly as much a problem for dogs as it is for humans - estimates are that 25 - 40% of all dogs are overweight – the risk of overfeeding dogs should not be ignored.

Finding what motivates your dog can be half the battle, and there is an easy way to do this. Find some friends to help you, and give one a toy, one some food (as the third person, you have to work with your winning charm and personality alone). All stand a little way apart from one another, and each person should try their hardest to get the dog to come to them. Whoever the dog goes for, shows its motivation. If it's their owner, you're the lucky one! All you need to train your dog is lots of praise and attention when they are good – remembering that the hard part is to withdraw attention when they misbehave. You'll never be in the position of the dog doing well and you've got nothing to reward them with. You also can't drop your praise (a nuisance to other dogs training in the same area) nor will you find other dogs stuffing their noses where they shouldn't be when you're trying to work.

If they like toys, then a quick game when they've done well is the idea – but it must be quick, and try not to excite the dog too much if you want to carry on training. Try to keep a couple of toys that they only get during training sessions, or if they've been particularly good at other times, then remove these before they get bored.

If they go straight for the food then you are among the majority of dog owners. The hardest thing to remember is to remove from the dog's bowl anything that they get fed during training – but don't expect to get great training results using their usual dog food. They'll realise that they can get the food for free later on, even if they don't perform well enough to get it at the time.

There are lots of things that are marketed as 'training treats', but most of them are rather large chunks of biscuit, and really what is needed is a very small piece of something delicious. A mere taste of something lovely. By the time they've crunched through a dog biscuit they've forgotten what it is they were being rewarded for, and you've lost valuable time allowing the dog to stop focusing on you.

The best treats are a mixture of different treats, so the dog never knows what's coming. Small pieces of cheese, mixed with tiny pieces of sausage, and the odd bit of their normal food, or something similar is a good idea (remembering not to feed so much later on). Dogs don't seem impressed with volume – so don't give a big bit if they've suddenly done something stupendous, but give a few small bits, one at a time, very close together.

The very best treats are those you make yourself, so if you're feeling you could take on Gordon Ramsay, roll your sleeves up and get cooking!

Liver is loved by dogs. In the wild it's the prize bit of a kill – the first to be eaten along with the heart, but only by the animal at the top of the pack. But here in Domestic Dog Land, we lovingly cook it for our dogs, wherever in the pack they live.

Lamb's liver is widely available, but ox's liver is much cheaper. Chicken livers are also available if your dog needs something a little easier on the stomach.

Take equal amounts (around two kilos would be ideal) of flour (wholemeal if possible, plain or self-raising, it doesn't matter) and liver, one egg, and a teaspoon of very finely chopped garlic, or garlic powder.

Blend the liver in a liquidiser, then add the egg and blend again. Put the flour and garlic in a bowl, and add the liver and egg, then mix well. Put into a suitable container, open the windows (liver stinks!), and either cook for 30 minutes at 180°C (Gas mark 4), or microwave for 8-10 minutes (microwaving means less smell). When done, cut into very small pieces and store in an airtight container away from other food (due to the smell).

It can be frozen, so you can make up as much as you want, and just freeze any excess. Small portions can be taken out and defrosted in the fridge as and when needed.

Tins of sardines in tomato juice can be substituted for the liver, or try tinned tuna1.

You could try blending liver, banana and yoghurt or milk together to make a 'smoothie' that dogs will love. Use it to fill Kongs2 or other hollow toys and put in the freezer. Great for hot days, or when you need to keep your dog quietly entertaining himself for a while.

1Try to buy tuna caught in the eastern tropical Pacific Ocean, as this is the only area guaranteed to be catching the fish in a way that doesn't endanger dolphins.2A Kong is a hollow rubber toy made for dogs, with tiny hole one end, and a hole too small for the dog's muzzle the other. It has an erratic bounce, so can be used for games, but is also ideal for 'stuffing' with a huge variety of fillings. It can take anything from 15 minutes to an hour for the dog to finish the filling - especially if it has been frozen.