Jeremy Vine and Jezza's Exiles Content from the guide to life, the universe and everything 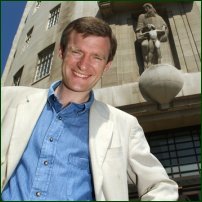 Jeremy Vine is a broadcaster and reporter on BBC television and BBC Radio 2. Jezza's Exiles is a message board created by one of his listeners for people to discuss various topics, including those mentioned on his radio programme. It is open to all posters and isn't exclusive to listeners of the programme.

Jeremy Vine is an experienced broadcaster, journalist and news reporter. Born in Epsom in 1965, he attended Epsom College and Durham University. His career in journalism started with a traineeship on the Coventry Evening Telegraph.

He joined the BBC in 1987 as a news trainee. After his traineeship he became a reporter on the Radio 4 morning news programme Today. He has reported from the USA, the Middle East, all over Europe, and Africa (where he was Africa Correspondent). While working on Today he covered a wide variety of subjects, including an interview with a redundant ballistics missile expert in Siberia, punishment beatings in Northern Ireland, neo-Nazis in Germany and sheep racing in Dorset. He has reported on many conflicts, including the border war between Eritrea and Ethiopia in South Africa, wars in Sudan and Angola, and also in war-torn Yugoslavia, where he was ambushed in a Croatian cornfield.

From 1999 to 2002 he worked on the BBC2 TV programme Newsnight. In 2001 he covered the run-up to the general election for Newsnight, travelling the country in a 1976 Volkswagen camper van. The MP Peter Mandelson famously stormed out on him in the middle of an interview when he was asked if Gordon Brown (who was then Chancellor of the Exchequer) was having a perfect election campaign.

During his career Jeremy has received a number of awards:

In 1999 he won the Silver Nymph award at Monte Carlo for his report in a fly-on-the-wall film of the Brixton Flying Squad in Johannesburg, which showed police badly beating up suspects. The film rocked the police service in South Africa and sparked uproar across the country.

He won an Amnesty International Radio Award in 1999 for his piece on the Radio programme From Our Own Correspondent about a former child soldier he met in Sierra Leone. In 2005 he was awarded a Sony award for 'Best Speech Broadcaster of the Year'.

In 2007 Jeremy Vine joined the BBC1 TV programme Panorama. He not only presents the show, but reports on films and conducts interviews. He also continues to present his Radio 2 programme - a blend of news stories and music.

Personal Life and Other Interests

Jeremy Vine's favourite song is 'This Year's Model' by Elvis Costello. He loves Chelsea Football Club, the films of Alfred Hitchcock and the poetry of WH Auden. He is married to Rachel Schofield, who is also a radio reporter. They have one daughter.

Jezza's Exiles is a message board created by one of the listeners to the Jeremy Vine Show on BBC Radio 2, who was also a regular poster on the BBC message boards as 'Belly-Dancing Goldfish' (or 'BDG'). She created the board in December 2006 after the BBC closed a number of its programme message boards.

She also created a website called Jezza's Exiles. The website explains all about the Jezza's Exiles message board and the reason for creating it, and is of course linked to the board. Although Jezza's Exiles is an unofficial board, it has a link from Jeremy Vine's official BBC page and there's a personal note from him on the website.

Although the message board was created primarily for commenting on each Jeremy Vine show, another aim was to keep contact between posters who had already established friendships through the BBC boards. Within two months Jezza's Exiles had almost 300 members and over 51,000 posts. It's a well-managed board with a friendly atmosphere, with very active voluntary hosts who are present every day.

During the first two months the message board blossomed into a large forum with a number of sections, extending well beyond discussions of each day's show.

An Entertainment section allows users to chat about other radio shows, TV programmes, and all types of music. The Lifestyle and Health section covers a wide variety of topics, ranging from holidays and favourite books to the serious health issues of breast cancer, diabetes and gluten-free diets. Posters can also share poetry here - either their own poems or their favourites by recognised authors. There are also sections on Computers and Technology, Sport, and Allotments and Gardening (see below).

Jezza's Exiles is a busy board, and, as it reflects topics mentioned in the daily Radio 2 programme, subjects are constantly changing. Here is a snapshot of the board in April 2007:

The main topic being discussed at the beginning of April 2007 was atheism, with posters explaining their beliefs or lack of them. Next was a discussion about a newspaper report that some history teachers were reluctant to teach the Holocaust as it might upset Muslim pupils. Staying with the Middle East, the next busiest topic was entitled Moderate Islam. Then followed a discussion on 'drug mules', about an alleged mule who had been caught and imprisoned, then threatened suicide. The majority of posters were unsympathetic to the man's plight; but a few posters expressed more empathy, blaming drug barons for forcing poorer people into drug trafficking. The thread then developed into an interesting discussion about compassion.

On 10 April, 2007 there was only one main topic of conversation in the entertainment area. This was the last episode of Life on Mars, a BBC TV programme about a 1970s-style police force with the twist that the main character has travelled through time from the 2000s. Other popular recent topics were discussions about the Steve Wright programme on Radio 2 and 'What Are You Listening To?', where posters list their favourite music.

There is a special section on Allotments and Gardening - as Jeremy Vine's Radio 2 programme has a regular feature on the subject - presented by Terry Walton from his own allotment in the Rhondda Valley in south Wales. As a result these broadcasts, Terry has appeared on two series of television programmes: Going to Seed on ITV Wales and The Big Dig on BBC2, both of which were filmed at his allotment. Terry has also written a book about gardening and allotments, to be published in April 2008.

Jezza's Exiles also has a virtual pub, The Drum and Monkey, where most subjects can be discussed and where a regular pub quiz is held.