Women and Children First Content from the guide to life, the universe and everything 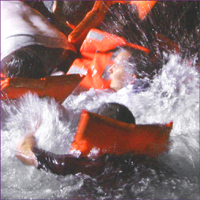 The loss of the RMS Titanic after hitting an iceberg on 14 April, 1912 shocked the world. The sinking of the 'unsinkable ship' and the huge loss of life was a devastating blow to the confidence of the public in maritime travel. One of the few saving graces to come out of the disaster, and one romanticised in film and legend since, was the story of the gallant behaviour of the men and crew as the cry of 'Women and children first' ensured that the most vulnerable reached the few available lifeboats. Together with the band playing on as the ship sank, this is perhaps the most enduring aspect of the sinking. But the origins of the phrase reach back over half a century and to the other side of the world.

In 1852, a troopship called the Birkenhead left Cork in Ireland with troops bound for the Eighth Frontier War, (sometimes called the 'Kaffir War') in South Africa. Commanded by Captain Robert Salmond, the Birkenhead was an iron-hulled paddle steamer carrying 638 people on board, including 20 women and children, 138 ship's officers and crew, as well as 480 army officers and drafted men. She was only seven years old and her design was considered extremely modern for the time. Originally commissioned as a frigate, she was re-fitted as a troopship in 1848 and therefore carried ample lifeboats for the numbers aboard.

In the early hours of 26 February, the Birkenhead struck submerged rocks off Danger Point, near Cape Agulhas in the Western Cape region of South Africa. Her iron hull split and around 100 soldiers drowned in their bunks. The damage was compounded when Captain Salmond attempted to reverse the ship off the rocks, causing the hull to be ripped open further and the boilers to be swamped. The ship began to break up and sink in 30 metres of water.

The crew and soldiers worked to launch the lifeboats, but poor maintenance and thick layers of paint meant only two cutters and a gig could be launched. The women and children were loaded into the boats and, once they were underway, Captain Salmond ordered 'every man for himself'. The horses were cut free to try and swim the two miles to shore but Lieutenant-Colonel Seton of the 74th Foot ordered the men to stand fast. He knew that hundreds of men trying to climb into the boats would swamp them and the women and children would be drowned, so he called out 'Let the women and children go first'. The soldiers were ordered into ranks as the sailors leapt for their lives. Not a single soldier broke ranks as the boats pulled away to safety, a testament to the discipline and bravery of the men. Finally, when he judged the boats were a safe distance away, Seton ordered the men to swim for their lives as the ship foundered beneath them.

A total of 445 men lost their lives in the sinking and attempting to swim to shore through shark-infested waters. In contrast, 193 people, including all of the women and children, survived1. The passenger list makes sombre reading.

The order 'Women and children first' became known as the Birkenhead Drill, and was immortalised by Rudyard Kipling when he wrote in 'Soldier an' Sailor Too':

1These figures are estimates. The exact numbers are unknown, as the passenger lists were lost with the ship.