The Boot, Weymouth Content from the guide to life, the universe and everything 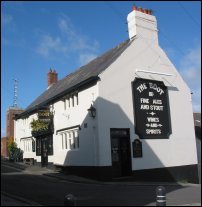 Dating from the 17th Century and reputed to be both the oldest and the most haunted inn in Weymouth, The Boot is situated in the old High Street (High West Street), in the Old Town of Weymouth, overlooking the Old Harbour. It is a friendly, old-style 'drinkers' pub', famed for convivial conversation, real ales and its Cheddar Valley cider. There is live music on at least one evening of the week.

The Boot is the sole survivor of four inns that originally existed in the old High Street, an inn or alehouse having stood on the site since 1346. Most of the current building, however, dates from the 17th Century. The plan is of a simple rectangle and, according to local historian Eric Ricketts1, the roof-span dimension appears to match a standard set by early 17th-Century builders of other similar domestic stone buildings in the Weymouth area. The building has been much altered since this time, having lost its stone roof weatherings, but stone-mullioned windows still grace the street. The pub occupies a strategic position with regard to smuggling - in earlier times it was literally a 'waterside inn'. The current North Quay road, which now runs between the pub and the harbour, did not exist; in common with other parts of Weymouth, it was built on reclaimed land. Visitors to the inn arriving by boat were guided by a lamp in the pub's front window, and they were able to haul their boat and cargo up a slipway, which survives as the small road to the right-hand side of the inn, as one stands facing it.

The interior of the pub still has its original beams and the inn retains an old 'floating peat floor' cellar (with a distinctive smell reminiscent of the reed beds of nearby Radipole Lake, an RSPB Reserve), ideal for keeping kegs of ale cool, with walls older than the rest of the building.

During the night of 9 February, 1645, the old High Street immediately outside The Boot was the scene of a particularly bloody skirmish between the Roundheads and the Royalists during the English Civil War, and which is graphically described in the book, The Crabchurch Conspiracy, by local author Mark Vine.

It is thought that The Boot may derive its name from an old tannery and cobblers shop which stood on the site of the nearby Municipal Building. Others believe that the name is linked to the common wooden boot sign that used to be displayed outside inns of this type before painted pub signs became commonplace. This distinctive object would indicate to travellers that the landlord would care for their personal appearance after a long journey. (A modern analogy of this is the 'Wash and Brush Up' service provided in major city railway stations.)

Although The Boot's present sign is somewhat bland - merely 'The Boot' printed in gold on a black background - an earlier version reflected a colourful history. In common with many inns from the period, there was often trouble between customs officers and landlords. The Town Records say that, one morning on 3 July, 1728, Thomas Parker, a customs officer, went to The Boot alehouse to see if he could seize any 'runned' (smuggled) goods, whereupon Lawrence Soaley and William Farr seized Officer Parker, called him a rogue, shook him up and threw him to the ground in such a way that he hurt his head.

The Boot has three bars, with antique wood panelling and floorboards which enhance the olde-worlde feel. The larger public bar (to the left as you enter the front door) is low beamed while to the right, on a lower level, is the lounge bar, which also has a side-entrance. The lounge bar contains a motley collection of boots of all sizes, from a set of four children's boots to a large pair of black thigh boots, wittily placed inside the fire grate, as if their owner had just come down the chimney in the manner of Father Christmas. Other boots in the collection include Wellington boots, climbing boots, skating boots and a pair of army officer's brown lace-up boots dating from World War I. At one time, the walls and ceiling of this bar were reportedly totally festooned with boots, mainly dating from the 17th and 18th Centuries. According to a 1975 edition of Pubbing, Eating and Sleeping in the South (Heritage Publications) the most novel boot of all was a cricket boot bearing the signature of the cricketing legend, Jim Laker2; this boot providing a lively talking point for any cricketing fans who happened to frequent the pub. However, this Researcher has been unable to locate this boot and enquiries of the bar staff have revealed that, sadly, most of the boot collection (and other pub artifacts) was thrown into a skip when the Devenish chain of pubs was bought out by Michael Cannon's Inn Leisure company in the mid-1980s.

The boot motif is carried on elsewhere in the pub. The larger public bar has a painting of a boot and some small brass boots on the window sill, while the lounge bar has a framed picture called 'The Seven Stages of Man', presumably of Shakespearean inspiration, depicting seven boots of various sizes. Outside the pub at the front is a large, probably papier-mâché, boot filled with flowers.

Just beyond the lounge bar, and on a higher level, is the small snug bar, which also provides the access to the ladies toilet, and which has drawings and paintings of the pub, old Weymouth and Dorchester Brewery adorning the walls. Also on the wall is the badge of The Black Watch regiment.

Fixed upright to the wall of the lounge bar is a spoon-shaped wooden oar on which is printed the words, 'Ponty's Holy Batten' and, at the other end, 'There she are!'. This commemorates one Ponty Groves, a fisherman and lifeboat man who was, according to the barman, 'the biggest 's**t-stirrer in town' - hence the wooden oar. The phrase, 'There she are!' pertains to Ponty's cry, in his Dorset accent, as he located and pointed out the stricken vessel to his crew. The oar is in two pieces and apparently used to be longer, a segment having been removed from the middle. This is because the oar used to adorn a different pub, Ponty's main haunt, The Sailor's Return in St Nicholas Street, but was moved when the Devenish chain was 'Cannonised'. The segment had to be removed to enable it to fit into its new place in The Boot.

The lounge bar contains a large open fireplace over which is a carved-wood decoration depicting two wild boars (a wild boar is the trademark symbol of Ringwood Brewery) facing each other over marsh land. The plaque has 'The Boot' engraved upon it. Apparently, Ringwood Brewery commissioned two of these carvings for its pubs, and The Boot was fortunate enough to receive one of them.

To the left as you enter by the front door is a small bookcase containing mainly paperback novels, which are frequently browsed by those sitting in the seat just inside the door. Immediately behind the bar is a bookrack containing mainly encyclopaedic books and atlases, leading this Researcher to enquire whether they were used to settle disputes during pub quizzes. The answer was no, the pub doesn't hold a Quiz Night.

The aforementioned book, Pubbing, Eating and Sleeping in the South, says that 'if you're a Gent and you want 'the loo' you need to follow the sign to the 'Used Beer Department'. Sadly, this is another artefact that has since disappeared. According to one of the bar staff, the humour had become outdated.

The pub's popularity can lead to an overspill of customers onto the pavement or onto a seating area just across the road outside the old Town Hall. Looking rather like a tiny village church, this is where most of the day-to-day business of running 'old Weymouth' would have been carried out. More recently, it was used as a venue for Girl Guides, but nowadays, sadly, it is boarded up.

Renowned for its real ales, The Boot is a Ringwood Brewery flagship pub and therefore provides the full range of Ringwood Ales; it also has a very popular, tangerine-coloured draught Cheddar Valley Cider. The draught lagers on offer are San Miguel and Oranjeboom. There are usually a couple of guest beers on offer which stay on for a week at a time. The Boot won the CAMRA Regional Pub of the Year Award in 2005.

Although at one time The Boot served a wide selection of bar food, only pork pies3 - delivered daily from a local delicatessen - are available now and only at lunchtimes. There is a good kitchen on the first floor but, because the staircase is steep and narrow, the Health and Safety Executive have forbidden staff to carry hot meals down these stairs. In terms of snacks, particularly to be recommended are the Jonathan Crisp range of potato crisps.

The pub has live music every Tuesday night and occasionally on other nights.

The Boot has the dubious distinction of being the most haunted pub in Weymouth, with reports of supernatural occurrences appearing in The News of the World and other national newspapers. According to the BBC news website, the pub is home to at least five ghosts. The first publicised sighting was by Mr and Mrs Ratcliffe soon after they moved into the pub in 1973. The previous licensee had warned them that there was a ghost who sang sea shanties, but they did not take his warning seriously. Then on two successive nights they heard the '...unnerving tread of invisible feet on the floor boards downstairs'. On going to investigate, Mr Ratcliffe saw nothing, although he could still clearly hear the heavy tramping on the floorboards4.

In July 1977, Mr and Mrs Smith, who had taken over the running of the pub, reported poltergeist activity involving such strange occurrences including locks being tampered with, doors opening and closing at will, wall decorations being moved and even furniture being rearranged. Furthermore, their barmaid once saw the ghostly resident as she changed a barrel in the cellar and shortly after this Mr Smith, on feeling a sudden intense cold come over him in the cellar, looked over his shoulder to see, for a split second, the apparition of a seaman wearing heavy sea boots!

Since then other people, both staff and customers, have had sightings of the ghost or ghosts, both inside and outside the pub. The pub's yard is allegedly haunted by the figure of a coachman who was last seen about 10 years ago by the landlord, accompanied by a sensation of intense cold. Local legend has it that one of the ghosts is a 'lady of easy virtue' who sits in a dark corner of the pub waiting for her lost lover.

1Eric Ricketts, RIBA. Author of The Buildings of Old Weymouth. Longmans of Weymouth (1975).2In July 1956, Jim Laker (1922 - 1986) a Yorkshireman, became the first single bowler to take all 10 wickets in a single innings in a test match. 3Delicious! Prepared by Bon Appetit - a small family-run deli in Weymouth4Nowadays, such a sound is more likely to emanate from 'Stompin' Dave', a regular entertainer at the pub!