Hauntings at the Royal Hospital Haslar, Gosport, UK Content from the guide to life, the universe and everything 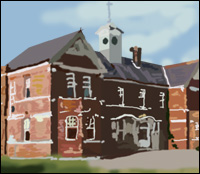 The following is based on accounts from hospital personnel and is not meant to imply definite proof of the existence of the paranormal.

Many of our older hospitals are reported to have former patients who appear to have stayed on for one reason or another. Haslar Hospital, a former naval hospital is no exception. It is believed to have many resident ghosts and the following article describes some of the reported experiences and urban legends associated with this hospital.

RH Haslar was built on the seafront of Gosport in 1753 and had lavish grounds, said to be the perfect place to convalesce, whilst the hospital boasted the latest medical practices. St Luke's Chapel was added in 1762 and later still, a landing stage was added so troops could reach the hospital directly from ships.

A lot of poltergeist activity has been reported in the galley1. According to a clairvoyant who works in the hospital there are three ghosts occupying the area. Michael Connelly, an Irishman who apparently likes the cooking; an angry man called Derek who appears to have died from stab wounds and a woman called Margaret who haunts the spiral staircase. She is believed to have tripped over something before the stairs were built and died as a result. There is also a spirit who inhabits the old Senior Rates Mess.

One of the Wardroom stewards claimed to have met 'Margaret' a few years ago walking up the spiral staircase. She said she met an elderly woman coming down and, thinking she was lost the steward asked her if she needed some help. However, the woman had vanished. 'Derek' and 'Michael' apparently like to let the galley workers known that they are there. It has been reported that all the files in the office have been tipped on the floor several times by unexplained means, and witnesses have claimed that the taps have turned on by themselves. The radio has apparently turned itself down.2 The evening supervisor has reported that cutlery has been thrown around and it has also been claimed by witnesses that the kettle has switched itself on and that doors have opened by themselves. Several people have claimed that some parts of the galley are bitterly cold where the rest of it is warm; another favourite trick of all the ghosts is leaving puddles of water on the floor. Many members of the galley staff have claimed to have heard tapping on the window of the chef's office, which has encouraged them to leave for the public restaurant in a hurry.

Several members of staff have reported seeing the figure of a man in the corridor outside the galley. One claims to have seen a man look in the door (she went to ask if he was lost but when she got there there was nobody in sight), whereas another reports having seen the reflection of an older man in the window (he turned around to ask if the man was looking for something, again nobody could be seen). Many people have complained that this corridor gets bitterly cold even when all the windows are shut and the heaters are on.3

This used to be the lunatic asylum - the galley, which is opposite, used to be the yard where those in the asylum had their exercise and this area is claimed to be a 'psychic hotspot'4

In Ward B2, formally known as the high dependency unit, the nursing staff had noticed that although machinery turned on by itself, it never affected the machines monitoring patients. In addition, the area outside the west end door got really hot and stuffy; the only place in the hospital where such a phenomenon occurs. A member of staff reported feeling dizzy and sick when going through this door. This ward is now closed due to budgetary cuts and the high dependency unit has been relocated to another part of the hospital.

The Corridor Outside the Operating Theatres

Staff have claimed to experience a sensation of being followed and most have reported a feeling of fear while being in this area. Staff members have claimed to hear footsteps as they have walked down the corridor and have admitted that they have quickened their pace while walking alone along it. Most members of the nursing staff choose to take the long route from B block to E block in order to avoid it. A clairvoyant has claimed that the spirit residing in the corridor died because of a botched operation - an emergency procedure (as he was in immense pain), probably to save him from a blood clot. A hole was drilled in his left temple to relieve the pressure but he died in the corridor. It is claimed that he can only rest once the operation is repeated and the new patient dies. The original spirit is attempting to guide the other man's spirit back to his body. This is supposedly because there was nobody around to help him when he died.

A member of staff claims to have seen the ghost of a little girl who runs around the top floor of D Block. A large number of children were killed in a fire in this part of the building, but nothing specific is known about this tragedy. The area is now closed as the paediatric department has moved to another hospital.

The cellars are now closed, but before that they were used as a short cut to the X-Ray department. In the days before anaesthetic the cellars accommodated the operating theatres and housed the insane; it has been reported that you can still hear screams and the rattling of chains. During the Second World War the cellars were once again used as operating theatres and as wards during the height of air raids.

The money used to build this accommodation block was raised by the 'Women of Canada' during the Great War. It has been claimed that many spirits supposedly inhabit Canada Block along with unexplained noises and lights turning on and off. The ghost that most have reported seeing is that of a nurse who hanged herself during the First World War. Just to add to this, Canada Block is also built in the site of the original hospital graveyard.

Whether you believe in ghosts or not, spending nights alone in an old hospital is rather nervewracking. Not everything can always be explained by old pipes and faulty machinery - and many staff and patients firmly believe that there are still many former patients residing in the Royal Hospital Haslar.

1The naval term for the kitchen.2 This is supposed to be Margaret's favourite trick as she doesn't like loud noise3The majority of this information was provided by a clairvoyant who works in the hospital4A place which is reported to have higher than normal psychic and spiritual activity