Women in Ancient Athens Content from the guide to life, the universe and everything 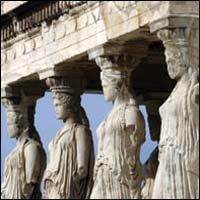 For much of history, women have had a raw deal when you compare their general lot with men. This is also the case when we look at the position of women today in many parts of the world. Ancient Athens was no different.

All women in Athens had a kyrios - a guardian – who was usually her husband or, if she was unmarried, her closest male relative. The kyrios had a huge amount of control over the woman.

Rich, respectable women were expected to spend nearly all of their time in the house, leaving it only for special occasions such as funerals and festivals. However, poor women, whose husbands could not afford slaves, had to work beside their husbands, go shopping for food and collect water. Some were forced to work for a living; as midwives, for example. In one way, you could say they were the lucky ones – at least they weren't cooped up in a house.

This is not to say, of course, that women did not enjoy their lives or did nothing of value. However, the information we have today from Athenians of the time is overwhelmingly from a male perspective and portraying men, so we get only a generalised view.

One of Xenophon's works, Oikonomikos, has a man telling his wife her duties, which included supervising and ordering servants, allocating funds, having clothes made, keeping dried grain fit to eat and making sure that ill servants received treatment. Poor women, by contrast, would have to look after the house, bring up children, cook, clean, make clothes, and perhaps help their husbands to work.

Women had fewer legal rights than men. They often had no say in to whom they were betrothed and the betrothal might take place when the girl was as young as five. The betrothal itself was a ceremony conducted in front of witnesses who would attest to the virginity of the girl and the size of her dowry1. The dowry was a very important part of the marriage as most people married for property, not love.

Marriage was not formalised in law. It was based on living together and the couple were considered married from the moment the woman or girl entered her husband's house, which normally took place when the girl was 14. The man was usually in his late twenties or early thirties.

The woman did not own her dowry. It was the property of her father, who provided it, and the husband who had control over spending it. However, in the event of a divorce, the dowry was returned. Attaining a divorce was easier for men than women but both sexes could initiate proceedings.

Women also had fewer rights in the area of adultery. Men were permitted to take mistresses, concubines and to see prostitutes, whereas a woman was not allowed to have sexual relations with anyone other than her husband.

Athenians were determined to keep property within the family. The normal state of affairs was for property to be passed on by will and divided equally among the sons. Women were not normally allowed to inherit. If a woman had no surviving brothers, she could inherit property as an epiklēros. She would then marry a close male relative who would take charge of the property. If she was already married, she might be forced to divorce her husband in order to do so. This kept property within the family.

Women were not allowed to enter into contracts, buy anything expensive or own property. They could own jewellery, clothes and a personal slave, but that was it.

Athenian men saw women as weaker than them in all spheres of life – physically, morally, socially and intellectually. They did not give women rights and considered them corruptible, cunning and untrustworthy. Women were not allowed in the Athenian democratic assembly. It was not entirely negative, though. On a more positive note, they also thought of women as the givers of life, which was obviously a very valued and important role.

Life for women in other Greek city-states was probably much the same as for Athenian women, with the exception of those of Sparta. There, women were trained to be strong by competing in athletics such as javelin, running and wrestling. This was to ensure that they gave birth to strong children who, if male, would fight for Sparta. Young girls were also forced to strip for religious services, dances and processions, in order that they did not learn to show off with expensive clothes.

1A dowry might consist of objects, money or property, or a combination thereof, and was paid by the girl's family to her new husband.