Mike the Headless Chicken Content from the guide to life, the universe and everything 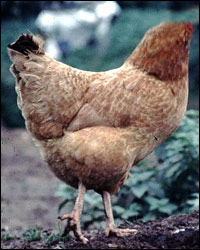 'Honour the Past, Envision the Future' is the motto of the town of Fruita, Colorado, USA. A statue in the town honours the most famous personality of Fruita's past, Mike the Headless Chicken. In his time of fame he drew crowds from around the country and even appeared in Life Magazine, before his extremely untimely demise.

The Creation of a Monster

Reports vary somewhat on the exact circumstances of Mike's transformation from potential dinner to actual gravy train. What is clear is that late in 1945, perhaps in September, perhaps on the tenth, Mr. Lloyd Olsen went out to his yard to slaughter a chicken. Some reports say he wanted to please his mother-in-law, who was rather fond of chicken necks. Other stories mention only Mike's destiny as meat in Mrs. Clara Olsen's pot. In any case, Lloyd placed his axe in such a way as to leave as much neck as possible on the body of the chicken that would come to be known as Mike. Now, upon decapitation, chickens have been known to flutter about for as long as several minutes before realising that they are, in fact, dead, whereupon they do the sensible thing and lie down quietly. Mike, however, after taking a few understandably-shaky steps, fluffed up his feathers and went about his business in the barnyard with the other chickens of the non-headless variety, as though nothing of any great import had occurred. He continued to act as though everything were completely normal, going through the motions of pecking for food, preening, tucking what used to be his head under his wing when he slept, and even attempting to crow, emitting a pathetic gurgle for his trouble. Despite his attempts to act otherwise, the truth, of course, was that Mike's head had been cut off.

When Mike was found to still be alive the following morning, Olsen decided that this was something that one didn't see every day, and no doubt recognising the potential value of such an interesting oddity, began dropping grain and water into Mike's gullet by means of an eyedropper. When Mike was still alive a week later, Olsen trundled him off to Salt Lake City to be examined at the University of Utah by scientists who presumably had dedicated themselves to the study of all things headless. Although incredulous at first, they determined that an intact brain stem was responsible for keeping Mike going. It seems that Lloyd's axe stroke fell quite a bit too close to the front of the bird. In fact, one ear was left intact. Truly, Mike should be known as Mike the Nearly-Headless Chicken.

Mike Gets to Not See the World

Thus began a whirlwind existence of touring sideshows of the day in the company of such luminaries as a two-headed calf. Mike was also the subject of numerous photo shoots for magazines and newspapers, and was examined by scientists across the country. As might be expected, his owner was loudly criticised by the day's equivalent of animal rights activists, who were of the opinion that Olsen should finish the job he started with Mike. However, there are a few residents of Fruita who can still recall that Mike continued to thrive, and didn't seem particularly put out about having to go through life without a head. Sadly, Mike's fame faded after he died from choking on a kernel of corn or a blood clot, depending on the report. He had reached the appetising size of eight pounds (partially-butchered weight).

Has all this talk of chicken made you hungry? See what other Researchers have cooked up!

And if you don't feel like cooking your bird, you can always try to Hypnotise a Chicken.
1It is unclear why 10 September is not the date of the festival.