Echinoderms Content from the guide to life, the universe and everything 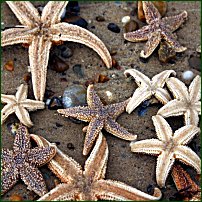 Echinoderms (Echinodermata) are a type of animal living in the sea. They are a major phylum - this means that they are one of the main categories into which animal life is divided. The phylum includes starfish and sea urchins, as well as some animals which are not familiar to most of us because they only live at great depths in the ocean.

The word 'echinoderm' means literally 'spiny skin' and this is one of the characteristic features of this phylum, although they don't all have spiny skin. Their main characteristics are:

Since echinoderms mainly live in the deep ocean, most of them are not familiar to us - the only ones you are likely to find around the shore are starfish and sea urchins.

The phylum of echinoderms is divided into six types or 'classes':

There are about 6,000 species in existence, but another 13,000 species have existed in the past, dating back as far as 560 million years ago; these creatures fossilise well due to the hard bits, so we have a very good record of previous species.

Some species reproduce by having males and females which get together in the usual way to produce babies. Others reproduce asexually by splitting themselves in two and each half growing new bits to replace the missing ones.

Sexual reproduction is a primitive process which does not involve any sort of courtship. The males and females congregate in a crowd and then release their eggs and sperm into the water. They then proceed with the normal business of life - eating.

1Starfish are known in America as sea stars.