Boudicca Content from the guide to life, the universe and everything 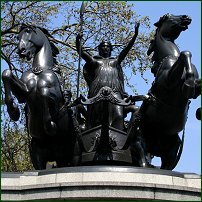 In stature she was very tall, in appearance most terrifying, in the glance of her eye most fierce, and her voice was harsh; a great mass of the tawniest hair fell to her hips; around her neck was a large golden necklace; and she wore a tunic of divers colours over which a thick mantle was fastened with a brooch. This was her invariable attire.
- Cassius Dio, Roman historian

Boudicca (otherwise known as Boudica, Boadicea, Buduica or Bonduca) was the British, Celtic Queen of the Iceni of East Anglia. She is particularly remembered for leading a rebellion against the Romans after her husband Prasutagus died.

For a time under Roman rule, the story of Boudicca was forgotten, but years later the writings of Tacitus and Dio Cassius were rediscovered by the Victorians. The Victorians painted pictures of Boudicca and statues have been made of her. Even suffragette literature features Boudicca. Queen Victoria's husband commissioned Thomas Thornycroft to create a bronze statue of Boudicca riding her chariot alongside her daughters. Although the statue depicts Boudicca's chariot as having scythes attached to its wheels, it is believed in real life this would not have been the case. The statue was finally finished in 1905 and positioned on Westminster Bridge, London. The statue also has lines from Cowper's poem on it:

Little is known about Boudicca's upbringing because the only information we have about her comes from Roman sources. However, it is believed that she was born into aristocracy in around 30 AD and may have been named after the Celtic goddess of victory, Boudiga. As a youngster she would have been sent away to a fellow aristocratic family and trained in the history and customs of the tribe, as well as learning how to fight in battle. In this way, family connections were strengthened.

Another way in which bonds were built between families was through marriage. As Boudicca was from an aristocratic family, it was felt that she should marry into another one. Boudicca married Prasutagus when she was 18 years old. Their wedding was celebrated for a day and a night and during this time they also gave offerings to the Celtic gods. Together they had two daughters, called Isolda and Siora.

In 43 AD, the Roman Emperor Claudius   invaded Britain. This was followed by an uprising from the Britons in 49 or 50 AD, but it was quickly brought under control by the Romans. Among those who rebelled was Prasutagus, who under Roman rule became the 'client' king of south-eastern Britain, with his tribal capital at what is now Caistor St Edmund, in Norfolk. This means he was acknowledged by the Romans as a ruler, but no longer exerted real power and had to do as the Romans commanded. Prasutagus left a will leaving Emperor Nero half his property and lands, while the other half was left to his wife and their two daughters. Prasutagus was happy with this arrangement, but his wife Boudicca was wary about the Romans and when Prasutagus died events were to take place that would prove Boudicca right.

When Boudicca's husband died in 60 AD, Nero's financial representative Catus Decianus ignored Prasutagus's will and set about taking control of Boudicca's land and possessions. Chiefs of the Iceni tribe also suffered a similar fate and many people were treated as slaves.

Kingdom and household alike were plundered like prizes of war.... The Chieftains of the Iceni were deprived of their family estates as if the whole country had been handed over to the Romans. The king's own relatives were treated like slaves.
– Tacitus

Boudicca refused to give up her land and possessions to the Romans and as a result was publicly flogged while her daughters were raped by soldiers. Her lands were taken from her and her family was left humiliated.

We British are used to women commanders in war; I am descended from mighty men! But I am not fighting for my kingdom and wealth now. I am fighting as an ordinary person for my lost freedom, my bruised body, and my outraged daughters.... Consider how many of you are fighting – and why! Then you will win this battle, or perish. That is what I, a woman, plan to do! – let the men live in slavery if they will.
– Boudicca, according to Tacitus, Annals

While the Romans were busy fighting the Druids, who raised the native population and their leaders against the Romans in the west of Britain and North Wales, Boudicca spied her chance for revenge, leading her Iceni tribe and neighbouring tribes (including the Trinovantes) to the Roman military headquarters of Camulodunum, known today as Colchester. There the Iceni tribe levelled the houses of the inhabitants of Camulodunum1 and even broke the statues and tombstones2 in the Roman cemetery. Some of the inhabitants of Camulodunum took refuge in the temple of Claudius, but soon found that this was no place to hide from Boudicca's army, as it too was demolished. Boudicca took no prisoners: every Roman citizen in the city was killed.

Nothing is safe from Roman pride and arrogance. They will deface the sacred and will deflower our virgins. Win the battle or perish, that is what I, a woman, will do.
– Boudicca, according to Tacitus

Next Boudicca travelled towards London. But as she was travelling, the Roman governor of Britain, Gaius Suetonius Paulinus, on his way home from Mona (Anglesey) got there first. Paulinus was accompanied by Emperor Nero's troops. He planned to fight Boudicca there, but he soon found that Londinium (London) was not fortified and thus left, taking who he could with him. When Boudicca arrived, her tribe destroyed the houses and massacred all who stood in her way.

The Slaughter at St Albans

Hot on the heels of Paulinus, Boudicca travelled north to Verulamium (St Albans) along Watling Street, now known as the A5. St Albans at the time mainly contained Britons, but because they supported the Romans they were seen as a threat to Boudicca and her people. The town didn't stand a chance and was torn apart. Again, houses were pulled down and people who hadn't escaped on hearing news of Boudicca's advance were killed3. Boudicca's desire for a country free of Romans was fast becoming a reality – or so she thought.

The Fate of Roman Britain

I was whipped by the Romans when they tried to take our lands – and now I am fighting for my freedom. Think how many of us are fighting and why. We must win this battle or die. Let the men live as slaves if they want. I will not.
– Boudicca's last speech, as recorded by Dio Cassius

The exact place where Paulinus and Boudicca battled for Britain remains unknown. However, the most likely place appears to be Mancetter, Warwickshire, as Tacitus's description fits that area. By this time, Paulinus would have also met up with another couple of Roman legions from Wales. The only group of Romans not to join Paulinus stationed in Britain at the time were those from Devon. Altogether, Paulinus had 10,000 men on his side and knew he was heavily outnumbered by Boudicca. However, he had a plan, unlike 'the treacherous lioness', and worked out that if he positioned his army correctly, he could win the war. Paulinus placed his army on the top of the hill in a long line formation. When the time came for battle, they advanced steadily towards Boudicca's tribe below. Not only did Boudicca's tribe have the disadvantage of climbing a hill towards their enemy, they had to squeeze together to go through the mouth of the valley. The Romans with their javelins, short swords and shields easily overthrew the Britons. Boudicca's tribe had no option but to try to retreat. However, they had been so certain that they would win the war against the Romans that they had asked their families to come along and watch from wagons. This was a big mistake, as the wagons now barred their escape route and the spectators were also killed. Consequently, 80,000 Britons (according to Tacitus) and 400 Romans died in the battle.

It is not known what happened to Boudicca after the war. Some people suggest that she died of an illness, while others propose that she escaped with her daughters to another part of Britain, where they drank from a poisoned chalice and died. Either way, it seems that they were saved from being humiliated by the Romans, who would have made them walk in a victory parade before they killed them. The whereabouts of their bodies is also shrouded in mystery. Some people believe that Boudicca was buried at Stonehenge while others suggest Norfolk, Hampstead in north London or under a platform belonging to London's Kings Cross Station.

In revenge, the Romans executed the Iceni or made them slaves. Iceni lands were taken over by the military, families lost their hereditary homelands and the great Iceni rebellion was over. The horses that were left over were captured and taken to the gyrus in Coventry to be trained.

1Some sources note that the houses were burnt down by Boudicca.2Some of the statues and tombstones can be seen in Colchester museum today.3In total, between 70,000 and 80,000 Roman civilians lost their lives in the destruction of St Albans, London, Colchester and the surrounding countryside. By a quirk of fate, the British death toll in Boudicca's defeat at the battle of Watling Street was also between 70,000 and 80,000.