Saturna Island, British Columbia, Canada Content from the guide to life, the universe and everything 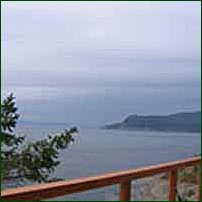 Saturna Island is a small1 island located between Vancouver Island and the mainland of British Columbia. It is part of the Gulf Islands, the Canadian half of an archipelago that also includes the US-owned San Juan Islands. Saturna is the southernmost of the Gulf Islands, and from the south side of the island it is possible to see the United States.

First Nations (indigenous Canadians) lived on Saturna Island some time prior to the coming of Europeans. The first Europeans to sight the island did so in 1791, aboard the Spanish schooner Saturnina — thus giving the island its name. A few farmers settled on the island, but it was not well-populated until the first British settlers arrived in 1869. The Saturna lighthouse was built in 1886 and the first school and post office arrived in 1919, being settled and industrialised at much the same rate as the rest of British Columbia. Despite high-speed Internet access, heavy machinery and a shiny new ferry terminal, Saturna retains much of its rural character.

Most people reach Saturna by ferry — the BC Ferries company provides regular sailings between Saturna, the other Southern Gulf Islands, Victoria on Vancouver Island and Vancouver on the mainland. It is possible to take a seaplane to Saturna from either Victoria or Vancouver, though this means of transportation is considerably more expensive and generally used as a tourist attraction rather than a standard way of getting places. Those people who have private boats or kayaks may use them to commute between islands, though the distance is a bit too great for regular travel to Victoria or the mainland. In case of emergency (for example, if a person needed to be rushed to hospital), it is also possible to land a helicopter at the second of Saturna's two fire stations.

Saturna has about 350 year-round residents, many of whom take an active role in the island's vibrant community. Most of the year-round population is clustered around the ferry terminal at Lyall Harbour on the western end of the island. At the terminal itself are a pub and a small store. The store is mainly geared towards the boaters who might stop briefly at Saturna, selling items such as canned foods, fish, magazines, fishing gear and clothing such as jackets or Saturna t-shirts. The store also features a gas pump, the only one on the island.

A few minutes' drive (perhaps ten minutes' walk) from the ferry landing is the Saturna Island General Store, the hub of most of the island's activity. The general store sells a wide variety of groceries such as one might find at any major supermarket, in addition to island specialities such as bread and baked goods from Saturna's Haggis Farm Bakery, gourmet goat cheese from nearby Pender Island and pies, quiches and sandwiches made by the general store's various employees. Adjacent to the general store is the Saturna Island Café, which in the summer serves dinner six days a week and lunch five days a week. The hours are less in the winter, but locals often come to sit at the tables, have a cup of coffee and read the paper — and because the café is one of the island's wireless Internet access points, many people come to the café to do work or just surf the Internet as well2. The final feature of the general store is the post office. There is no mail delivery on the island, so year-round residents are all given free mailboxes at the post office3.

Across the road from the general store is the Saturna Recycling Centre. This is staffed by volunteers and is open two days a week. It contains a 'free store', to which people can donate clothes, housewares etc, that they no longer have a need for, which other people are then free to take and use. Next-door is the Saturna Community Centre, which includes a medical clinic where a doctor is present two days a week, a gymnasium and a hall where community events are held. The Anglican church (the only religious institution on the island) is just down the road. In addition to hosting weekly services — sometimes Anglican, sometimes United Church of Canada4 — the church's basement houses a small library staffed by volunteers. The library has a reasonable selection of new and older books, and it is possible to request books from the public libraries on Vancouver Island. The library also has a computer with free dial-up Internet access.

This central village is home to one of the island's two fire stations (the other is at the far eastern end of the island) and the 911 emergency switchboard. Saturna is the driest of the Gulf Islands and fire is a large concern, particularly in summer. The fire-fighting force is made up of volunteers who are 'on-call' in shifts, and firefighters from Saturna may also go to help if there is a fire on a neighbouring island.

A few minutes' drive away from the centre is Saturna's elementary school, which usually contains about ten students. The school is part of the Victoria public school system and takes in children from kindergarten to grade five (ages five - ten). Older students take a water taxi to the middle school on Pender Island or the high school on Salt Spring Island four days a week.

Though the island seemingly shuts down in winter, with the thinning out of the tourists and summertime residents, there is still much activity. The café holds movie nights in the winter; community events such as the Firefighters' Pig Roast in November and the Burns Night Dinner on 25 January are well-attended; and there is always a group of regulars to be found in the pub!

Many of Saturna's year-round residents are those who can provide a specific service to the community: carpenters, plumbers and electricians, for example, or those who staff the two stores and the bakery, or those who own the various bed-and-breakfasts and rental cottages to be found on the island. Other Saturna residents are now retired and have moved from the mainland or from elsewhere in Canada and the United States. Quite a few have interesting stories to tell about why they came to settle on a small, rural island.

In summer, the population of Saturna swells, as people who live elsewhere during the year come to stay in their houses, cottages and cabins on the island. Other holidaymakers who might be coming for a week, a few days or just on a day trip support the Saturna economy by staying in one of the many B&Bs or rental cottages. There is also a small 'Lodge' on the island, a sort of upmarket hotel with six rooms and a fancy restaurant that is popular for weddings and other such events.

Many tourists come to Saturna to see the Saturna Island Vineyards, which, it is said, produce quite good wine5. The winery contains a bistro and small shop where it is possible to eat lunch and purchase wine and winery merchandise, such as T-shirts with the winery logo or cheeseboards made out of flattened wine bottles. Many of the day-trippers do come to Saturna just to see the winery.

Plenty of other people, of course, are attracted simply by Saturna's natural beauty, of which there is quite a bit. Walking trails snake around the island, such as at the top of Mount Warburton Pike, where it is possible to walk across the edge of a cliff and look down at the island below you and the ocean in front of you, a 180° view that encompasses Gulf Islands, San Juan Islands, Vancouver Island and even the mainland United States. Boot Cove, a popular destination of boaters due to its calm harbour, features a 'surge channel' in the narrow passageway between the harbour and the open water, and it's often hugely entertaining to watch boaters attempt to pass through it. East Point Park contains the island's lighthouse and the second fire station, in addition to one of the very few areas of sandy beach6 and a beautiful view of the ocean, from which it is possible to see mainland British Columbia and Washington in the US. About two-thirds of the island is a Canadian national park, so the land and the wildlife it contains are protected from human development. No camping is allowed in the national park areas (or, indeed, anywhere on Saturna) and government park rangers help to preserve the land and educate the island's visitors and residents about the natural world.

Saturna is home to many types of wildlife from bald eagles to bees to wild turkeys, in addition to the denizens of the ocean such as harbour seals, orca whales and dolphins, but any resident or frequent visitor will tell you that the most notable of Saturna's fauna are the deer. Naturalists believe that the deer may have swum over from the mainland thousands of years ago, but on the island they have no natural predators, so the population is large and completely unafraid of humans. It's necessary to be careful when driving on the island, especially after dark, because deer will run out into the road and many have been hit. Some islanders feed the deer, but this is not to be encouraged, as it's not good for the deer to become any more comfortable with human contact. The deer can be hunted, but only by the First Nations peoples who have a small, uninhabited reserve on the island.

If all this sounds good and you'd like to visit Saturna, it's quite easy to go for the day — the ferry schedules are such that in the summer it's possible to leave the mainland or Vancouver Island early in the morning and get back home by around 10pm, though in the winter the sailings are less frequent. It's difficult to get a sense of the island in just a few hours, though, so a first-time visitor should probably stay for two or three days (if they can) to be able to see all that Saturna has to offer. And who knows — you might like it so much that you decide to come back! Many visitors, even those who don't own property on the island, come back again and again.

1Roughly 31km2.2This Researcher is proud to say that she has logged on to h2g2 from the café.3It's possible for 'summer people' to have postboxes, but they're required to pay, so many choose to have their letters addressed to 'General Delivery' and then collect them from the post office.4An amalgam of the Canadian Presbyterian, Methodist and Congregationalist churches.5Though as this Researcher is under legal drinking age, it has not been possible to test this assertion.6As is characteristic of beaches in the Pacific Northwest, most of Saturna's beaches are rocky, with the occasional large piece of driftwood.