The South West Coast Path: Beer to Lyme Regis Content from the guide to life, the universe and everything 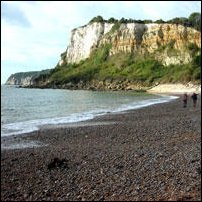 The South West Coast Path is one of Britain's National Trails and, weighing in at a mighty 1,015km (or 630 miles), is its longest. It covers the whole coastline between Minehead in Somerset and Poole in Dorset, and can be tackled as a series of day walks or all in one go. The Entries in this series are suitable for either type of walker. All routes are described in the traditional anti-clockwise direction of travel.

As on much of the coast path, wheelchair users and those with puchchairs and prams will find the going difficult away from the more accessible beaches, mainly due to the steep hills - in fact, the SW Coast Path has ascents totalling more than three times the height of Everest! Sections of the coast path can be remote and difficult, and walkers should make sure they have taken sensible precautions in case of an emergency:

Frankly, no. The last section of coast path in Devon is largely unremarkable, and you're unlikely to go home raving about it to your friends. The town of Seaton is pleasant enough without being particularly memorable, and after that the path passes through mainly dense woodland some distance from the coast itself,with few viewpoints or sunny clearings. If you've just walked to Beer from Sidmouth, you'll find this walk particularly anticlimatic. It's a long eleven miles, too.

Having said that, the long woodland section is often attractive and it is in fact the largest ash forest in Europe! Known as the Undercliff, it covers a massive 324 hectares (or 800 acres) and is managed by Natural England as a National Nature Reserve. A series of major landslips have caused the exceptional habitat here; the underlying Gault Clay is very unstable and deforms fairly easily, bringing the heavier rocks above it crashing down. The most recent was on Christmas Eve, 1839, when an estimated eight million tons slid towards the Channel and separated a section now known as Goat Island. Rather improbably, the crop of wheat on the standing block was still harvested the following summer.

Be well-prepared for this walk, as in the woods of the Undercliff there are no easy escape routes. Roads are remote, there is no mobile phone signal and nowhere to top up on water. The path can be tough and unforgiving, and even a mere twisted ankle could make a pleasant walk in the woods into an absolute nightmare. Take it easy, and take a friend.

The Jurassic Coastlink service X53 runs between Bournemouth and Exeter, stopping at both Lyme Regis and Beer roughly every two hours through the day. Check the Traveline website for timings. Ordnance Survey Landranger map 192 covers the route at 1:50,000 scale, or for more detail it is covered by Explorer map 116. The latter is recommended in case of any problems on the Undercliff.

From the Anchor Inn in Beer, turn left through the Jubilee Memorial Grounds and take a fairly steep path up and over the headland. The path drops rapidly down towards Seaton; at low tide, it is possible to walk along the beach, otherwise follow the road and rejoin the promenade at a roundabout. Seaton is a very old settlement, dating back to Roman times, and although its population has almost trebled since 19701 it has a friendly air about it. It is most famous for its salt marshes and Seaton Tramway. Walk right along the seafront to a small bridge alongside the main road bridge; this is a 'Scheduled Ancient Monument'. Axmouth Old Bridge, opened in 1877, claims to be the oldest standing concrete bridge in England - it was certainly one of the first to be built, along with the concrete house at its eastern end. The nearby village of Axmouth was a flourishing port in Norman times.

Be careful to turn left for the coast path at the end of the bridge, rather than right along the public footpath, which leads to a dead end! Instead, the route follows the main road for a short distance before turning right up a steep hill onto a golf course. Take great care after passing the clubhouse, as more than one fairway is crossed! Eventually, civilisation is left behind and some exceptional views open up from the field above Haven Cliff. Take some time to enjoy them, as there is nothing remotely as beautiful in terms of views for several miles.

The path descends into woods, which grow denser as the Undercliff begins, and twists and turns all too regularly with many short flights of steps. Take great care to stay on the path, as many of the crevasses are well-hidden by undergrowth, an alarmingly short distance from the path. It gradually widens and gets a little easier, but after a while can be a little claustrophobic - often the sea is far out of sight. However, the Undercliff is a wonderfully wild place; it is almost completely untouched by humans apart from the coast path, and one can get a real sense of being really close to nature. It's pretty tough going, and there are few attractive resting places; a good spot for lunch is by a ruined house at Charton Bay, just before Humble Point - it was evacuated the day before the 1839 rockfall. It does have the feel you would expect of an undisturbed patch of purest nature, and there are badgers, nightingales, lizards and over 400 species of wildflowers here.

The path widens and narrows several more times before finally turning into a gravel track and suddenly leaving the woods - and Devon, you're now in Dorset - at a small farm. After six miles of woods, the view on a clear day is sensational. Blinking in the sudden daylight, stop for a while and admire Lyme Bay and Portland Bill in the distance. You made it!

The path finally suddenly descends to the Cobb, a harbour at the eastern end of Lyme Regis dating from the 13th Century. It's all very picturesque, and turning left you are almost immediately rewarded with everything you would expect of a small resort - cream teas, beer and ice cream. You've made it to Lyme Regis, famous for its fossils and their legendary collector Mary Anning. Accommodation is plentiful here, except in the summer months when it may be worth phoning ahead to book. Buses run back to Beer from the town centre.