'Definitely Maybe' - the Album by Oasis Content from the guide to life, the universe and everything 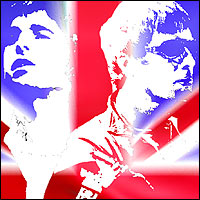 In 1994, British music was changing. The start of the decade had seen an American invasion of the British charts, as Grunge swept the nation. Nirvana were the band of choice, and it seemed that British music would merely live in their shadow. However, that was all soon to change.

The nascent 'Britpop' scene was already starting up in London, as bands like Suede1 and Blur began to find their feet. Then came the news from the States that Nirvana's troubled lead singer Kurt Cobain had committed suicide. This had the effect of bringing Grunge to a standstill and the stage was set for a British band to take a leading role. Contrary to the predictions of the music press, what some regard as the first, (and certainly one of the most influential), classic 'Britpop' album didn't come from Blur, Suede, or even from anywhere in London. Five lads from Burnage, Manchester, calling themselves Oasis released their debut album and as the then-Editor of Loaded magazine said: 'The decade kicked off'.

Too much time and energy has been spent arguing what the album's oxymoronic title actually means, some people say it's a reference to an obscure Kinks track, others say it was a response when questioned on the band's chances of succeeding. The definitive answer is that Noel Gallagher claims he just copied it from a poster2.

The sleeve design of the album comprises a photograph taken in bandmember Bonehead's front room and shows amongst other things the band, portraits of the footballers Rodney Marsh and George Best, a poster of Burt Bacharach and a television showing The Good, The Bad, and The Ugly. Tellingly, the reverse of the sleeve shows Noel Gallagher holding a globe in the palm of his hand, perhaps alluding to the band's plan to become the greatest rock 'n' roll band in the world.

The album as it appears below was recorded partially in Loco Studios, Wales, at the same time the Stone Roses were recording their ill-fated second album. This led to a friendship between members of the two bands, particularly with the Gallaghers and Mani, the Roses' bassist who broke into the place Oasis were staying in order to steal drugs, before commandeering a tractor3; and Ian Brown, the Roses' lead singer, whose vocal style is often seen as a precursor to Liam Gallagher's. Brown also recorded a song: 'Keep What Ya Got' with Noel Gallagher, which appears on his The Greatest album.

The original Australian release came with a bonus disc containing the tracks 'Whatever', which was released in the UK as a single; and '(It's Good) To Be Free' and 'Half The World Away', both of which appeared on a later B-Side compilation album, The Masterplan. The original Japanese CD release came with two bonus tracks: 'Cloudburst' and 'Sad Song', both of which featured as B-sides on later singles. The following track-listing applies only to the original 1994 CD release of the album in Britain and the USA:

Within 30 seconds of the opening track of their debut album, Oasis made a statement of intent. The loud guitars and manic drumming, set against Liam Gallagher's trademark drawl left listeners in no doubt that this was exactly what it said on the tin: rock 'n' roll by a band who wanted to be rock and roll stars. This song also features the first appearance of Liam's signature extended vowel sounds, as he informs us that he wants some time in the Sunsheeeeeine.

Slightly slower and less intense than the opening track, 'Shakermaker' showcased Noel Gallagher's influences. The melody is controversially 'borrowed' from 'I'd Like To Teach The World To Sing' by The New Seekers4, and the seemingly nonsensical lyrics are all taken from television. Mr Clean and Mr Ben are a household detergent and a children's TV hero, not two people living in the Gallaghers' loft; Mr Sifter owned a record shop in Withington; and a Shakermaker was a plaster mould toy that Noel played with as a child.

Originally recorded with backwards guitars, 'Up In The Sky' was meant as a psychedelic tribute to The Beatles. The album version doesn't feature any psychedelia and is simply a rock 'n' roll song with anti-establishment overtures, as the original version didn't fit with the album as a whole.

'Columbia'7 slows the album down a notch, and grooves along nicely on a repeated three-chord riff. This was the band's original demo which brought them to the attention of Radio One as well as a small amount of fame. The song was originally meant as an instrumental until, as Liam recalls, we wrote some words for it.

'Supersonic' starts with a simple drum intro from Tony McCarroll before the guitars join in, played a fraction too slowly. The tempo of the song feels like it's deliberately holding back, but this may be to draw attention to the lyrics. The words to the song were once suspected to be about the trials of a teenage prostitute called Elsa, but this was rubbished by the revelation that Elsa was a flatulent nine-stone rottweiler who was in the studio when the song was written. The song was written in an afternoon to replace 'Bring It On Down' as the band's first single when McCarroll was unable to get his drum takes right.

'Bring It On Down'

This song is a deep, aggressive punk track delivered at high speed and maximum volume. Of all the songs on the album, it best showcases producer Owen Morris' 'Brick Wall' method, which basically consists of turning all the little dials on the mixing equipment up to the red line8 for full-on volume. Thanks to this, for a year or so Oasis were the loudest band on the pub jukebox. A fact which must have helped them become more widely recognised.

Starting with a burst of static and a chugging guitar-sound very reminiscent of T-Rex's 'Get It On', 'Cigarettes and Alcohol' not only sums up the band's outlook on life, but epitomises the whole of 1990s 'lad' culture. Containing an obvious reference to cocaine use which apparently slipped past all censors, the song provided the line that young men throughout the 1990s lived by: 'All I need are cigarettes and alcohol.'

I'll sing anything live, at any time, except for 'Digsy's Dinner'.
- Liam Gallagher.

This song is the marmite of the album. It's loved and hated in equal amounts with nobody taking the middle ground. Digsy Deary - singer with Liverpool band Smaller and the inspiration behind the song - hates it with a vengeance, even allowing for the fact that he uses it to get Oasis fans to buy him drinks. A light-hearted tune about inviting someone round to your house to eat lasagna, 'Digsy's Dinner' is possibly the weakest song on the album. Then again, it may also be a total masterpiece. It's up to the listener to decide.

A soulful tune, and possibly the nearest the band come to a love song on the album, 'Slide Away' is no less understated than other songs, but relies more on Liam's vocals to carry the piece. A song about the promise of a successful future relationship, 'Slide Away' was written after an argument between Noel and guitarist Bonehead, and remains a fan favourite.

For the final album track, the mood completely changes. Whereas the first 10 songs are loud, lairy and fast-paced, 'Married With Children' is an acoustic number which closes the album on a high note. Unusually for Oasis acoustic numbers which tend to be sung by Noel, Liam retains lead vocals, making Definitely Maybe the only Oasis album on which Noel does not take centre stage for a number.

Definitely Maybe topped the UK album chart and the US Heatseekers Chart in 1994, and sold over seven million copies worldwide. Somewhat surprisingly over a million of those were shipped to the United States, despite this the band were never to gain as much mainstream popularity in America as in the UK. The album's singles were also widely successful, with all four reaching the UK top 40 and 'Cigarettes and Alcohol' peaking at number seven in the UK singles chart.

The album is widely regarded as one of the greatest British albums of all time, and was voted the 'Best Album Ever' in a recent NME poll. It became the fastest-selling debut album ever on its release, although that record is now held by Sheffield band Arctic Monkeys with their debut album Whatever You Say I Am That's What I'm Not, a fact which has earned the Yorkshire outfit a fair few comparisons to the Mancunian songsmiths.

1Known in the USA as 'The London Suede' due to potential confusion with an existing American act.2A Gallagher trademark. The band's name also came from a poster, and the title of the band's fourth studio album, Standing on the Shoulder of Giants, was misquoted from a £2 coin.3Mani himself claims that he did this, in an interview for the 2004 Definitely Maybe DVD release.4Another Gallagher trait, and one that he willingly admits to possessing. It's been suggested that he even 'borrowed' from his own song 'Married With Children' when writing 'She's Electric' for the follow-up album - a song that also uses a line from the theme tune to children's educational TV show You and Me.5The first two being 'Supersonic' and 'Shakermaker'.6Nobody's quite sure what they're referring to. Except Liam. His explanation is that Well, it's about living forever, ain't it?7Named after the Columbia Hotel in Liverpool, which the band were subsequently banned from. Rumours abound that televisions were thrown from windows, but that'd be a little too cliche...8The equivalent would be Spinal Tap turning all their amplifiers to 11.