The World's Largest Catsup Bottle Content from the guide to life, the universe and everything 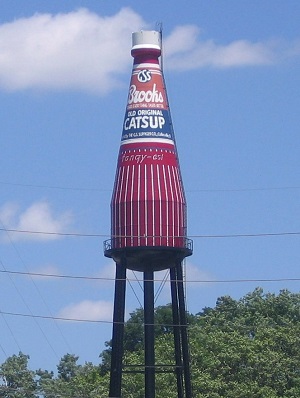 The World's Largest Catsup Bottle is a water tower in Collinsville, Illinois, a town just east of St Louis, Missouri. It was constructed in 1949 by the WE Caldwell Tower Company of Louisville, Kentucky, for the GS Suppiger Company, manufacturers of Brooks Catsup. It is a nationally-recognised landmark, a piece of Route 66 Americana, and is listed in the National Register of Historic Places. It could, if it wanted to, hold 100,000 gallons of catsup.

History of the Bottle

The Collinsville Canning and Packing Company opened in 1891, going through a succession of owners until Everett and Elgin Brooks bought it in 1907. The Brooks brothers made tomato products, chilli beans and other ingredients for chilli, and of course their famous catsup. Brooks Catsup was, for a time, America's leading catsup brand and in its local distribution market of St Louis, outsold the competition two to one.

In 1920 the brothers sold the factory to the American Cone and Pretzel Company, who in turn sold the company to the GS Suppiger Company in 1933. Suppiger continued making the Brooks brothers' products and kept the Brooks name. The company grew throughout the 1930s and 1940s and expanded production lines. In the late 1940s it was determined that a water tower was needed to supply water to the plant operations and a new sprinkler system. It was company president Gerhart Suppiger who suggested the bottle design.

In 1960 the Suppigers sold the Brooks line, and catsup production moved to Indiana. The Collinsville facility was used as a warehouse. With no production operations the water tower was no longer necessary and sat disused for several decades.

Brooks' parent company still owned the original facility into the 1990s, and put the property up for sale in 1993. The Catsup Bottle might have faced possible demolition if a purchaser would have decided it didn't want or need it, so prior to the sale the company offered to donate the tower to the city of Collinsville. The city declined, citing the cost of the extensive renovation the landmark would need.

The Catsup Bottle Preservation Group was formed by local residents in 1993 to save the structure. The group organised many fund-raisers and drives to raise money, selling T-shirts, holding auctions and sales, and accepting donations through their nationwide 'Paint It!' campaign.

Unveiling of the new Catsup Bottle was commemorated with a parade on 3 June, 1995. Two years later, the anniversary was marked by Catsup Bottle Celebration Day in May, 1997. By 1999, the event had evolved to become the Summerfest Birthday Party and Car, Truck and Bike Show, celebrating the 'rebirth' of the Catsup Bottle complete with a 'Happy Birthday' sing-along to the Bottle, and birthday cake for all. The summer party includes a full day of activities, fair booths and events.

Brooks Old Original Tangy Catsup is still produced today by Birds Eye Foods in Green Bay, Wisconsin. It is not available nationwide, but is generally distributed across the Midwest. Birds Eye has changed the traditional 'catsup' to the more commonly accepted 'ketchup'.

The Catsup Bottle is located at 800 South Morrison Avenue (part of Illinois Highway 159) in Collinsville, directly between Interstate 55/70 and Interstate 64, or online at the World's Largest Catsup Bottle.