'Bergerac' - the TV Series Content from the guide to life, the universe and everything 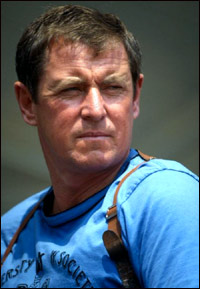 Jersey is commonly perceived (if at all) as a small, pokey little island near France famous for nothing more exciting than tax-evasion and its curiously inbred populace. Not so. For who, having watched the much-bruited1 '80s detective series, Bergerac - set against the backdrop of this somewhat tawdry island - can have failed to be moved, perhaps to tears?

Bergerac is, in short, a masterpiece. A whole generation of UK television viewers was weaned on the boyish good-looks of the protagonist, played by John Nettles; the waggish, eccentric playboy-millionaire lifestyle of that most loveable of rogues, Charlie Hungerford; and the other (less-important) things that other (less-important) people did throughout.

Some hard-bitten cynics have proposed that the fact that John Nettles's career has plummeted into obscurity, coupled with the fact that nobody even knows any more (or probably ever knew for that matter) the name of the actor who played Charlie, that this is undeniable proof of the utter worthlessness of the programme. Well let the critics indulge in their casuistry2, we - and the other hitherto uncounted numbers of Bergerac fans - remain unflinching in our devotion to John Nettles.

Early estimates suggest there may be as many as two, or even three, fans backing Mr Nettles all the way. In the face of such popular support the critics claims seem risible.

Jim Bergerac offered an alternative to the anti-heroism of the Starsky and Hutch-esque, macho cop of the early 1980s who resented authority and got the dirtiest jobs done by flaunting well-established police procedure, doling out unwarranted levels of violence and becoming unnecessarily confrontational with his superiors. Jim followed the book. His winsome grin and chirpy optimism always won through and he still managed to remain on good terms with the chief of police. Perhaps The Professionals and their ilk have something to learn from mild-mannered, conformist, unthreatening, and slightly boring Bergerac.

1Much reported, from the French bruit. So now you know.2Quibbling, for those of you who don't know the OED backwards.